Aleksandr Davidovich Nadiradze (Georgian: ალექსანდრე ნადირაძე, Russian: Александр Давидович Надирадзе 20 August 1914 – 3 September 1987) was a Soviet inventor, designer and engineer in the fields of aircraft and missile technology. He developed various missiles, bombs, shells and is considered "father" of the mobile ICBMs, having created the RT-21 Temp 2S (SS-16), RSD-10 Pioneer (SS-20) and the RT-2PM Topol (SS-25). More modern weapons such as the RT-2PM2 Topol-M and RS-24 are mostly based on Nadiradze's work as well.[1]

Born on 20 August (or 2 September) in 1914 in the town of Gori, Georgia, Nadiradze was raised in a teacher's family in Tbilisi. Initially working as an assistant in a small Georgian aerospace faculty, he made his first invention in Mai 1934.[2] After finishing at the Transcaucasian Industrial Institute in 1936 he moved to Moscow and applied to the Moscow Aviation Institute. Two years later Nadiradze began working in the Central Aerohydrodynamic Institute (TsAGI) in which he led a team of engineers engaged in theoretical and experimental research on aircraft landing gears based on the principles of air cushions. He was also involved in the development of the Tupolev Tu-2 and early Soviet turbo jet fighters. In 1941 he was appointed as a chief designer in the Moscow OKB (Experimental Design Bureau) plant 22 (Gorbunov).[1]

At the end of 1941 Nadiradze began to research rocketry. During the Great Patriotic War he developed five versions of anti-tank shells, one of which had satisfactory results. In 1945 he got appointed chief designer and chief of bureau of the Faculty of Missile weapons Moscow Mechanical Institute of the People's Commissariat of ammunition, functioning as experienced OKB guide holding lectures on the production and designing of missiles and launchers, while simultaneously conducting research on two-stage rockets and turbojets. In 1948 the Council of Ministers of the USSR transferred the Moscow OKB institute to CB-2 Minelhozmasha and Nadiradze took command over a division which was developing unguided anti-aircraft missiles and anti-tank rockets. In 1950 he developed the Soviet anti-air missile system "Swift" and a year later the new KB-2 was incorporated into GSNII MSKHM-642, which basically merged diverse design bureaus working on cruise missiles, powder and radio-controlled bombs into one institute. In 1953 Nadiradze then took charge over project "Raven". His experience was used to create the world's first high altitude meteorological rocket which' development technically already began in 1949 at the Central Aerological Observatory Hydrometeorological Service of the USSR. The missile was designed to deliver "instruments" into the upper atmosphere. His involvement was of high importance since the first Soviet meteorological rocket MR-1 Meteo which was successfully launched into orbit in 1951 was developed by Alexander Nadiradze himself. In 15 October the same year he would be tasked with the development of the so-called "Tshaika" radio-controlled bombs (UB-2000F). Tests were successfully completed in 1955 and the new weapon was accepted for service later that year. In late 1957 Moscow GSNII MSKHM-642 was combined with Reutov OKB-52 Chelomey. Nadiradze got appointed head of Chelomey's secret development section and in 1961 took charge over the entire OKB while remaining chief designer. By decision of the Soviet government and defence ministry a competition on designing a mobile intercontinental ballistic missile (ICBM) was organized and Alexander Nadiradze's team won. He became founder of the Soviet mobile missile forces. On 6 March 1966 the defence ministry gave order for the development of mobile solid fuel ICBM's. The project was named "Temp-20" which would then become the RT-21 Temp 2S. On 14 March 1972 "Air-20" was launched for tests at the state landfill RVSN (Plesetsk Cosmodrome) in the Arkhangelsk region which were completed in December 1974. The secret launch site was headed by fellow Georgian Lt.General Galaktion Alpaidze who was in charge of the Soviet missile program and from 1975 also deputy director of the Moscow Institute for Thermal Technology. On 21 February in 1976 two missile regiments consisting of Temp-20s started their combat duty in Plesetsk. 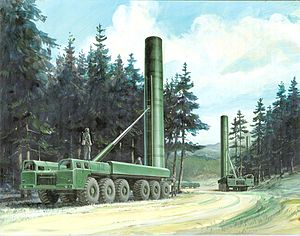 Prior to that Nadiradze had already created the RSD-10 Pioneer in 1971 which was based on his earlier works on the Temp-2S. Its flight tests went exceptionally well and ended on 9 January in 1976. The mobile missile complex Pioneer then got accepted for service on 11 March the same year. His Pioneer would become the base for the later Topol missile. Nadiradze's third great achievement in Soviet missile technology was complete for which he got awarded with the title Hero of Socialist Labour ( Gold medal hammer and sickle) and Order of Lenin. He then developed the heavily improved Pioneer-UTTH (NATO designation SS-20 Mod 2) which would deliver warheads with three 5–50 kt MIRVs.[3] The new system was adopted by the Strategic Missile Forces on 28 April 1981. On 29 December 1981 Nadiradze was elected full member (academician) of the USSR Academy of Science in the Department of Mechanics and Control Processes (theoratical and applied mechanics, mechanical engineering and engineering science). At the Kazomi Presidium Supreme Soviet of the USSR he was awarded Hero of Socialist Labour a second and Order of Lenin a fourth time. When General Secretary of the CPSU Mikhail Gorbachev and U.S. President Reagan signed a treaty on the Elimination of Intermediate-Range to Short-Range missiles on 8 December 1987 the USSR had to destroy more than 728 of its Pioneer missile complexes. The RT-2PM Topol which' development was already approved in 1977 but put into active service not earlier than 1988 just a year after Nadiradze's death, remains one of the primary strike capabilities of the Russian Federation. The main problem of the Topol was to create a suitable battle management system, what kept Nadiradze occupied throughout the entire development stage. For his last project, Nadiradze received the USSR State Prize in 1987. His work was continued by another scientist named Boris N. Lapygin.[4][5] This last achievement kept the progressive concept of mobile ICBM's alive, yet was less decisive than his very first inventions. However as the author of 100 scientific magazines and over 220 inventions and guides Nadiradze's work would prove to remain vital for future developments and projects based on his earlier achievements. He principally established a scientific base for missile systems which would be used by his disciples and successors.[1][6][7][8][9][10][11]

Backside of the Nadiradze medal with an engraved mobile ICBM, resembling the RSD-10 Pioneer.

In 1993 the Cosmonautics Federation of Russia and the Moscow Institute of Heat Engineering established a medal named after academician A.D Nadiradze. On the backside of the medal a mobile ICBM launcher is engraved.[12]

Commemorative plaques in honor of A.D Nadiradze are installed in front of the main building of the same institutes.[1]

Nadiradze lived and worked in Moscow until his death on 3 September 1987. He is buried at the Novodevichy Cemetery in Moscow (section 10). On the tombstone Nadiradze is portrayed holding a sheet of paper in his hands, implying the man's zeal for his work.[13]