From Infogalactic: the planetary knowledge core
Jump to: navigation, search
For other uses, see Alexander Nevsky (disambiguation).
This name uses Eastern Slavic naming customs; the patronymic is Yaroslavich and the family name is Nevsky.

Commonly regarded as a key figure of medieval Rus', Alexander - the grandson of Vsevolod the Big Nest - rose to legendary status on account of his military victories over German and Swedish invaders while agreeing to pay tribute to the powerful Golden Horde. He was canonized as a saint of the Russian Orthodox Church by Metropolite Macarius in 1547.[2] Popular polls rank Alexander Nevsky as the greatest Russian hero in history.[citation needed] 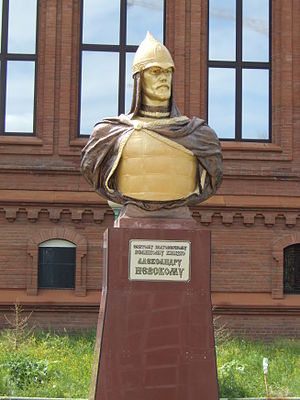 From Tales of the Life and Courage of the Pious and Great Prince Alexander found in the Second Pskovian Chronicle, circa 1260–1280, comes one of the first known references to the Great Prince:

"By the will of God, prince Alexander was born from the charitable, people-loving, and meek the Great Prince Yaroslav, and his mother was Theodosia. As it was told by the prophet Isaiah: 'Thus sayeth the Lord: I appoint the princes because they are sacred and I direct them.'

"... He was taller than others and his voice reached the people as a trumpet, and his face was like the face of Joseph, whom the Egyptian Pharaoh placed as next to the king after him of Egypt. His power was a part of the power of Samson and God gave him the wisdom of Solomon ... this Prince Alexander: he used to defeat but was never defeated ..."[3]

Born in Pereslavl-Zalessky, Alexander was the second son of Prince Yaroslav Vsevolodovich and Rostislava Mstislavna, daughter of Kievan Rus' Prince Mstislav Mstislavich the Bold. Alexander seemed to have no chance of claiming the throne of Vladimir. In 1237, however, the Tatar-Mongols came to the Suzdal region. All who bowed their heads, kissed the boots of the Khan, and gave up their citizenship remained alive and well; those who did not submit were destroyed. Vladimir princes Yuriy Vsevolodovich and Yaroslav Vsevolodovich submitted to Batu Khan. Thus, the land became part of the Genghisid Golden Horde empire and its military force merged with the Tatar-Mongols military.

During the military campaigns of Yuriy Vsevolodovich, his younger brother Yaroslav was seated as Prince. He gave his 8-year-old son Alexander Yaroslavich to Batu into amanat (hostages). While staying in the Horde from 1238 to 1252, Alexander learned the whole structure and customs, became "blood brother" to Batu's son Sartak, wed Batu Khan's daughter, and later became a loyal servant of the Golden Horde as head of the Vladimir principality (1252-1263). He was summoned by the Novgorodians to become knyaz (or prince) of Novgorod and, as their military leader, to defend their northwest lands from Swedish and German invaders. 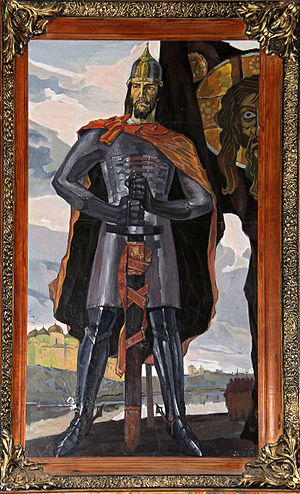 After the Swedish army had landed at the confluence of the rivers Izhora and Neva, Alexander and his small army suddenly attacked the Swedes on 15 July 1240 and defeated them. The Neva battle of 1240 saved Rus' from a full-scale invasion from the North. Because of this battle, 19-year-old Alexander was given the sobriquet "Nevsky" (which means of Neva). This victory, coming just three years after the disastrous Mongol invasion of Rus, strengthened Nevsky’s political influence, but at the same time it worsened his relations with the boyars. He would soon have to leave Novgorod because of this conflict.

After Pskov had been invaded by the Germans and Estonians, the Novgorod authorities sent for Alexander. In spring of 1241 he returned from his exile, gathered an army, and drove out the invaders. Alexander and his men faced the Livonian heavy cavalry led by the bishop of Dorpat Hermann, brother of Albert of Buxhoeveden. Nevsky faced the enemy on the ice of the Lake Peipus and defeated the German knights and Estonian infantry during the Battle of the Ice on 5 April 1242.

Alexander’s victory was a significant event in the history of the Middle Ages. Foot soldiers of Novgorod had surrounded and defeated an army of knights, mounted on horseback and clad in thick armour. Nevsky's great victory against the Livonian Brothers apparently involved only a few knights killed rather than hundreds claimed by the Russian chroniclers; decisive medieval and early modern battles were won and lost by smaller margins than are seen in contemporary conflicts. Strategic considerations aside, Alexander's victory was an important milestone in the development of Muscovite Russia.

After the Livonian invasion, Nevsky continued to strengthen Russia’s Northwest. He sent his envoys to Norway and, as a result, they signed a first peace treaty between Russia and Norway in 1251. Alexander led his army to Finland and successfully routed the Swedes, who had made another attempt to block the Baltic Sea from the Russians in 1256.[4] 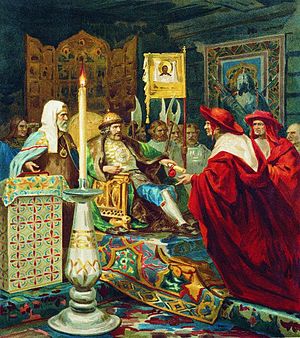 The envoys of the Roman Pope attend Alexander Nevsky

Nevsky proved to be a cautious and far-sighted politician. He dismissed the Roman Curia’s attempts to cause war between Russia and the Golden Horde, because he understood the uselessness of such war with the Tatars at a time when they were still a powerful force. Historians seem to be unsure about Alexander’s behavior when it came to his relations with Mongols. He may have thought that Catholicism presented a more tangible threat to Russian national identity than paying a tribute to the Khan, who had little interest in Russian religion and culture. It is also argued that he intentionally kept Russia as a vassal to the Mongols in order to preserve his own status and counted on the befriended Horde in case someone challenged his authority (he forced the citizens of Novgorod to pay tribute). Nevsky tried to strengthen his authority at the expense of the boyars and at the same time suppress any anti-Mongol and anti-Muscovite uprisings in the country (Novgorod Uprising of 1259).

According to one interpretation, Alexander’s intentions were to protect scattered principalities of what would become Russia from repeated invasions by the Mongol army. He is known to have gone to the Horde himself and achieved success in exempting Russians from fighting beside the Tatar army in its wars with other peoples.

Some historians see Alexander's choice of subordination to the Golden Horde and refusal of cooperation with western countries and church as an important turn to the east for the Russians.[5]

Thanks to his friendship with Sartaq Khan, Alexander was installed as the Grand Prince of Vladimir (i.e., the supreme Russian ruler) in 1252. A decade later, Alexander died in the town of Gorodets-on-the-Volga on his way back from Sarai, the capital of the Golden Horde. Prior to his death, he took monastic vows and was given the religious name of Alexis. 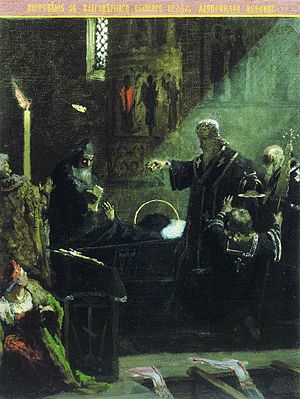 From the Second Pskovian Chronicle:

Great Prince Alexander, who was always firm in his faith in God, gave up this worldly kingdom ... And then he gave up his soul to God and died in peace on 12 November [1263], on the day when the Holy Apostle Philip is remembered ...

And the priests and deacons and monks, the poor and the wealthy, and all the people said: 'It is our end.' "[3]

Though he died in Gorodets, Alexander was laid to rest in the city of Vladimir, in the Great Abbey at The Church of the Nativity of the Holy Mother of God.

According to the Novgorod First Chronicle, Alexander married first a daughter of Bryacheslav Vasilkovich, Prince of Polatsk and Vitebsk, in 1239. Her name is not given in the chronicle. Genealogies name her as Paraskeviya or Alexandra (possibly birth and marital names respectively). They had five children:

He married a second wife named Vasilisa or Vassa[6] shortly before his death. They had no known children. 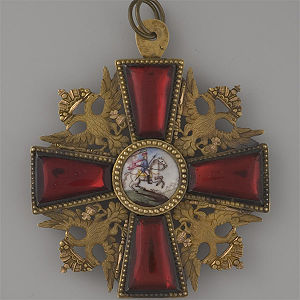 Decoration of the Imperial Order of Saint Alexander Nevsky 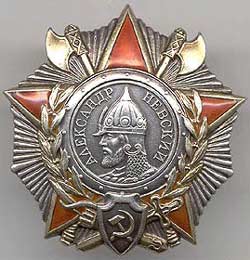 Some of Alexander's policies on the Western border were continued by his grandson-in-law, Daumantas of Pskov, who was also beatified in the 16th century.

In the late 13th century, a chronicle was compiled called the Life of Alexander Nevsky (Житие Александра Невского), in which he is depicted as an ideal prince-soldier and defender of Russia.

Veneration of Alexander Nevsky as a saint began soon after his death. The remains of the prince were uncovered in response to a vision, before the Battle of Kulikovo in the year 1380, and found to be incorrupt. He was glorified (canonized) by the Russian Orthodox Church in 1547. His principal feast day is 23 November. By order of Peter the Great, Nevsky’s relics were transported to the Alexander Nevsky Lavra in St. Petersburg where they remain to this day. A second feast day was instituted on 30 August in commemoration of this event. He is also commemorated in common with other saints of Rostov and Yaroslavl on 23 May.

On 21 May 1725, the empress Catherine I introduced the Imperial Order of St. Alexander Nevsky as one of the highest decorations in the land. During the Great Patriotic War, on 29 July 1942, the Soviet authorities introduced an Order of Alexander Nevsky to revive the memory of Alexander's struggle with the Germans. There was also a Bulgarian Order dedicated to Saint Alexander which was founded on 25 December 1881 and then ceased to exist when a People's Republic was declared on 16 September 1946.

In 1938, Sergei Eisenstein made one of his most acclaimed films, Alexander Nevsky, on Alexander's victory over the Teutonic Knights. The soundtrack for the film was written by Sergei Prokofiev, who also reworked the score into a concert cantata. Today, the film is renowned for its extraordinary battle on ice sequence, which has served as inspiration for countless other films. In the picture, Nevsky used a number of Russian proverbs, tying Nevsky firmly to Russian tradition[7] 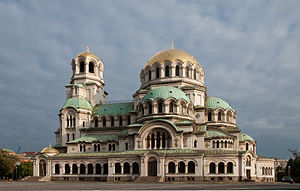 Alexander's proverbial phrase (paraphrasing Matthew 26:52), "Whoever will come to us with a sword, from a sword will perish," has become a slogan of Russian patriots. There is a long tradition of Russian naval vessels bearing Nevsky's name, such as the 19th-century propellor frigate Alexander Nevsky and a strategic ballistic missile nuclear submarine recently built for the Russian Navy.

Alexander Nevsky's fame has spread beyond the borders of Russia, and numerous cathedrals and churches are dedicated to him, including the Patriarchal Cathedral in Sofia, Bulgaria; the Cathedral church in Tallinn, Estonia.

On 24 September 2008, Alexander Nevsky was declared the main hero of Russia’s history by popular vote, as reported by the Kommersant newspaper.

In December 2008, he was voted the greatest Russian in the Name of Russia television poll.[8] 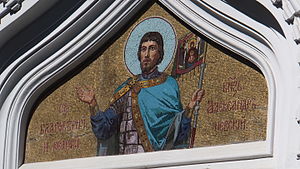 Mosaic of Nevsky on the Alexander Nevsky Cathedral, Tallinn.