Alexander Ivanovich Oparin (Алекса́ндр Ива́нович Опа́рин; in English, Aleksandr Ivanovich Oparin[1]) (March 2 [O.S. February 18] 1894 in Uglich, Russia – April 21, 1980 in Moscow, Soviet Union) was a Soviet biochemist notable for his untested theories about the origin of life, and for his book The Origin of Life. He also studied the biochemistry of material processing by plants and enzyme reactions in plant cells. He showed that many food-production processes were based on biocatalysis and developed the foundations for industrial biochemistry in the USSR.[2]

Oparin graduated from the Moscow State University in 1917 and became a professor of biochemistry there in 1927. Many of his early papers were about plant enzymes and their role in metabolism.[3] In 1924 he put forward a hypothesis suggesting that life on Earth developed through a gradual chemical evolution of carbon-based molecules in the Earth's primordial soup. In 1935, along with academician Alexey Bakh, he founded the Biochemistry Institute of the Soviet Academy of Sciences.[2] In 1939, Oparin became a Corresponding Member of the Academy, and, in 1946, a full member. In 1940s and 1950s he supported the theories of Trofim Lysenko and Olga Lepeshinskaya, who made claims about "the origin of cells from noncellular matter". "Taking the party line" helped advance his career.[4] In 1970, he was elected President of the International Society for the Study of the Origins of Life. He died on April 21, 1980, and was interred in Novodevichy Cemetery in Moscow.

Oparin became Hero of Socialist Labour in 1969, received the Lenin Prize in 1974 and was awarded the Lomonosov Gold Medal in 1979 "for outstanding achievements in biochemistry". He was also a five-time recipient of the Order of Lenin. 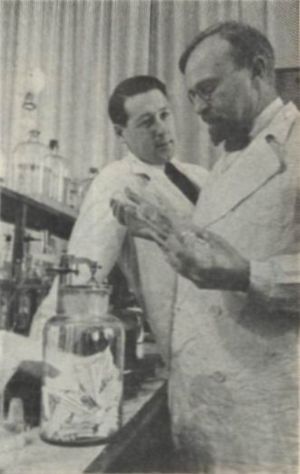 Aleksandr Oparin (right) and Andrei Kursanov in the enzymology laboratory, 1938

Theory of the origin of life

Although Oparin's started out reviewing various panspermia theories, including those of Hermann von Helmholtz and William Thomson Kelvin,[3] he was primarily interested in how life began. As early as 1922, he asserted that:

Oparin outlined a way he thought that basic organic chemicals might have formed into microscopic localized systems, from which primitive living things could have developed. He cited work done by de Jong on coacervates and research by others, including himself, into organic chemicals which, in solution, might spontaneously form droplets and layers. Oparin suggested that different types of coacervates could have formed in the Earth's primordial ocean and been subject to a selection process that led, eventually, to life.

While Oparin himself was unable to conduct experiments to test any of these ideas, later researchers tried. In 1953, Stanley Miller attempted an experiment to investigate whether chemical self-organization could have been possible on pre-historic Earth. The Miller–Urey experiment introduced heat (to provide reflux) and electrical energy (sparks, to simulate lightning) into a mixture of several simple components that would be present in a reducing atmosphere. Within a fairly short period of time a variety of familiar organic compounds, such as amino acids, were synthesised. The compounds that formed were somewhat more complex than the molecules present at the beginning of the experiment.

The influence of dialectical materialism on Oparin's theory

The Communist Party's official interpretation of Marxism, dialectical materialism, fit Oparin's speculation on the origins of life as 'a flow, an exchange, a dialectical unity'. This notion was re-enforced by Oparin's association with Lysenko.[5]