Alexander Vladimirovich Rutskoy (Russian: Алекса́ндр Влади́мирович Руцко́й) (born 16 September 1947) is a Russian politician and a former Soviet military officer.[1] Rutskoy served as the only Vice President of Russia from 10 July 1991 to 4 October 1993, and as the Governor of Kursk Oblast from 1996 to 2000. In the course of the Russian constitutional crisis of 1993, he was proclaimed acting President of Russia,[2][3] in opposition to Boris Yeltsin.

Alexander Rutskoy was born in Proskuriv, Ukrainian SSR, USSR (today Khmelnytskyi, Ukraine). Rutskoy graduated from High Air Force School in Barnaul (1971) and Gagarin Air Force Academy in Moscow (1980). He had reached the rank of Colonel when he was sent to the Soviet war in Afghanistan. He was in command of an air assault regiment. He was shot down twice during the war but ejected safely both times. He was briefly held as a prisoner of war in Pakistan after his plane entered Pakistani airspace and suffered multiple strikes forcing him to eject and being captured on the ground by locals.[4] For his bravery, in 1988 he was awarded the title of Hero of the Soviet Union.[5] He was chosen by Boris Yeltsin to be his vice-presidential running mate in the 1991 Russian presidential election.

Rutskoy was Vice President of Russia from 10 July 1991 to 4 October 1993. As Vice President, he openly called for the independence of Transnistria and Crimea from Moldova and Ukraine, respectively[6] and telephoned Georgia's leader Eduard Shevardnadze, threatening to bomb Tbilisi during the war in South Ossetia.[7]

Following the initial period of peaceful collaboration with Yeltsin, from the end of 1992, Rutskoy began openly declaring his opposition to the President's economic and foreign policies and accusing some Russian government officials of corruption. His opposition to Yeltsin became especially clear during the crisis in March 1993 when the Congress of People's Deputies tried, unsuccessfully, to remove Yeltsin from the presidency. In subsequent months, Rutskoy himself was accused of corruption by the officials of Yeltsin's government. On 1 September 1993, President Boris Yeltsin suspended Rutskoy's execution of his vice-presidential duties, due to alleged corruption charges. The Russian Constitutional Court subsequently declared Yeltsin's decree to be unconstitutional.

On 21 September 1993, President Yeltsin dissolved the Supreme Soviet of Russia, which was in direct contradiction with the articles of Soviet Constitution of 1978, e.g.:

Article 121-6. The powers of the President of RSFSR cannot be used to change national and state organization of RSFSR, to dissolve or to interfere with the functioning of any elected organs of state power. In this case, his powers cease immediately.

On the night of 21–22 September 1993, Rutskoy arrived at the residence of the Russian parliament and, at 00:22, assumed the powers of acting President of Russia, in accordance with the above article. He took the presidential oath, and said: "I am taking the authority of President. The anti-constitutional decree of President Yeltsin is annulled." Rutskoy's interim presidency, although constitutional, was never acknowledged outside Russia. After the two-week standoff, and the violence erupting on the streets of Moscow, on 4 October 1993, the Parliament building was taken by Yeltsin's military forces. Rutskoy and his supporters were arrested and charged with organization of mass disturbances. On the same day, Yeltsin officially dismissed Rutskoy as Vice President and fired him from the military forces. Rutskoy was imprisoned in the Moscow Lefortovo prison until 26 February 1994, when he and other participants of both the August 1991 and October 1993 crises were granted amnesty by the new State Duma. 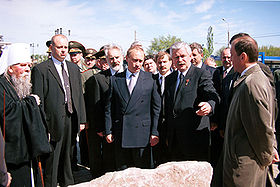 Soon after his release, Rutskoy founded a populist, nationalist party, Derzhava (Russian: Держава), which failed in the 1995 legislative election to the State Duma, gathering only about 2.5% of the votes and thus not passing the 5% threshold. He decided not to run for the presidency in the summer of 1996, but did run for the position of the governor of his native Kursk Oblast in the fall of the same year. Being a joint candidate from the communist and "patriotic forces", he was initially banned from the election, but allowed to run by the Russian Supreme Court only a few days before the election, which he won in a landslide, with about 76% of the vote. To this day, he is still active in Russian politics.