From Infogalactic: the planetary knowledge core
Jump to: navigation, search
This article is about the son. For his father, also an author, see Alexandre Dumas.

Alexandre Dumas, fils (French: [alɛksɑ̃dʁ dyma fis]; 27 July 1824 – 27 November 1895) was a French writer and dramatist, best known for Camille (a.k.a. The Lady of the Camellias). He was the son of Alexandre Dumas, père, also a writer and playwright. He was admitted to the Académie française in 1874 and awarded the Légion d'honneur in 1894. 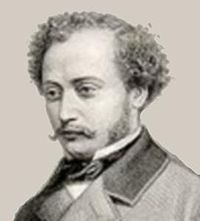 Alexandre Dumas (fils), in his youth 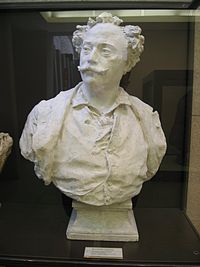 Dumas was born in Paris, France, the illegitimate child of Marie-Laure-Catherine Labay (1794–1868), a dressmaker, and novelist Alexandre Dumas. During 1831 his father legally recognized him and ensured that the young Dumas received the best education possible at the Institution Goubaux and the Collège Bourbon. At that time, the law allowed the elder Dumas to take the child away from his mother. Her agony inspired Dumas fils to write about tragic female characters. In almost all of his writings, he emphasized the moral purpose of literature and in his play The Illegitimate Son (1858) he espoused the belief that if a man fathers an illegitimate child, then he has an obligation to legitimize the child and marry the woman. In boarding schools, Dumas fils was constantly taunted by his classmates because of his family situation. These issues profoundly influenced his thoughts, behaviour, and writing.

Dumas' paternal great-grandparents were Marquis Alexandre-Antoine Davy de la Pailleterie, a French nobleman and Général commissaire in the Artillery in the colony of Saint-Domingue—now Haiti—and Marie-Cesette Dumas, an African slave.

In 1844, Dumas moved to Saint-Germain-en-Laye to live with his father. There, he met Marie Duplessis, a young courtesan who would be the inspiration for his romantic novel The Lady of the Camellias (La Dame aux camélias), wherein Duplessis was named Marguerite Gauthier. Adapted into a play, it was titled Camille in English and became the basis for Verdi's 1853 opera, La Traviata, Duplessis undergoing yet another name change, this time to Violetta Valéry.

Although he admitted that he had done the adaptation because he needed the money, he had great success with the play. Thus began the career of Dumas fils as a dramatist, which was not only more renowned than that of his father during his lifetime but also dominated the serious French stage for most of the second half of the 19th century. After this, he virtually abandoned writing novels (though his semi-autobiographical L'Affaire Clemenceau (1867) achieved some solid success).

On 31 December 1864, in Moscow, Dumas married Nadezhda von Knorring (1826 – April 1895), daughter of Johan Reinhold von Knorring and widow of Alexander Grigorievich Narishkin. The couple had two daughters: Marie-Alexandrine-Henriette Dumas, born 20 November 1860, who married Maurice Lippmann and was the mother of Serge Napoléon Lippmann (1886–1975) and Auguste Alexandre Lippmann (1881–1960); and Jeanine Dumas (3 May 1867 – 1943), who married Ernest Lecourt d'Hauterive (1864–1957), son of George Lecourt d'Hauterive and his wife Léontine de Leusse. After Nadezhda's death, Dumas married Henriette Régnier de La Brière (1851–1934) in June 1895, without issue. In 1874, he was admitted to the Académie française and in 1894 he was awarded the Légion d'honneur.

Alexandre Dumas fils died at Marly-le-Roi, Yvelines, on 27 November 1895, and was interred in the Cimetière de Montmartre in Paris. His grave is, perhaps coincidentally, only some 100 metres away from that of Marie Duplessis.