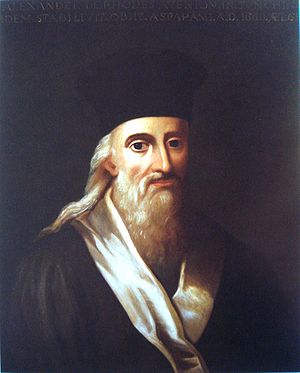 Alexandre de Rhodes, S.J. (Vietnamese: A-Lịch-Sơn Đắc-Lộ) (15 March 1591[1] – 5 November 1660) was a French Jesuit missionary and lexicographer who had a lasting impact on Christianity in Vietnam. He wrote the Dictionarium Annamiticum Lusitanum et Latinum, the first trilingual Vietnamese-Portuguese-Latin dictionary published in Rome in 1651.[2][3]

Alexandre de Rhodes was born in Avignon, now in France. He entered the novitiate of the Society of Jesus in Rome on 24 April 1612 to dedicate his life to missionary work. He arrived in Indochina about 1619. A Jesuit mission had been established in Hanoi in 1615; Rhodes arrived there in 1620. He spent ten years in and around the Court at Hanoi during the rule of Trịnh Tùng and Trịnh Tráng. While he was in Vietnam, he wrote the first Vietnamese Catechism and he published the first Portuguese-Latin-Vietnamese dictionary. This dictionary was later used widely by many Vietnamese scholars to create the new Vietnamese alphabet, using the Latin script – still used today and now called Quốc Ngữ (national language). Rhodes in his reports said he converted more than 6,000 Vietnamese, almost certainly an inflated number, but he nevertheless did win converts. 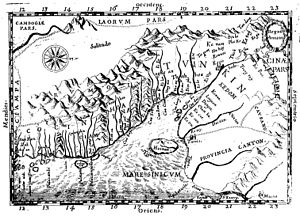 In 1624 he was sent to the East Indies starting in Cochin-China. In 1627 he travelled to Tongking, Vietnam where he worked until 1630, when he was forced to leave. He was expelled from Vietnam in 1630 as Trịnh Tráng became concerned about the dangers of the Catholic religion.

From Vietnam Rhodes went to Macau, where he spent ten years. He then returned to Vietnam, this time to the lands of the Nguyễn Lords, mainly around Huế. He spent six years in this part until he aroused the displeasure of lord Nguyễn Phúc Lan and was condemned to death. 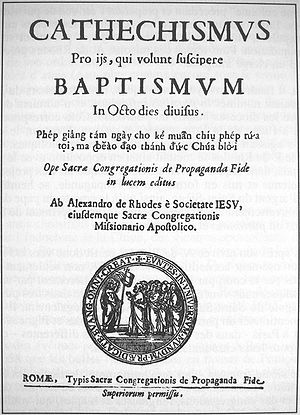 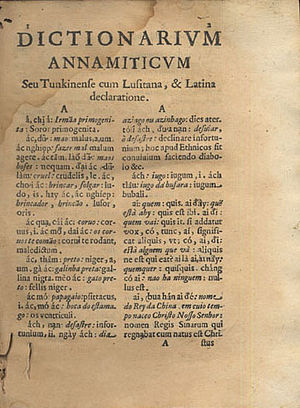 As his sentence was reduced to exile, Rhodes returned to Rome by 1649 and pleaded for increased funding for Catholic missions to Vietnam, telling somewhat exaggerated stories about the natural riches to be found in Vietnam. This plea by Alexandre de Rhodes is at the origin of the creation of the Paris Foreign Missions Society in 1659. As neither the Portuguese nor the Pope showed interest in the project, Alexandre de Rhodes, with Pope Alexander III's agreement, found secular volunteers in Paris in the persons of François Pallu and Pierre Lambert de la Motte, the first members of the Paris Foreign Missions Society, who were sent to the Far-East as Apostolic vicars.[4][5][6]

Alexandre de Rhodes himself was sent to Persia instead of back to Vietnam. Rhodes died in Isfahan, Persia in 1660 and was buried in the New Julfa Armenian Cemetery.

He wrote several books about Vietnam including:

In 1943, the French colony of Indochina issued a 30c postage stamp honoring him. In 2001 Vietnamese artist Nguyen Dinh Dang created a painting in homage to Alexandre de Rhodes and Nguyen Van Vinh.[8]