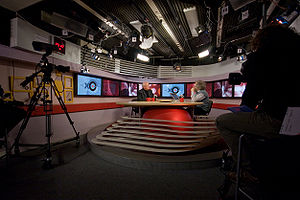 Venediktov graduated from the evening division of Moscow Pedagogical State University in 1978. After graduation, he worked for 20[citation needed] years as a history teacher at Moscow school №875.

In September 2006, Venediktov tried himself as a host on TV-channels Domashny, V kruge sveta.

Venediktov owns 18% of Echo of Moscow's shares, but resigned from the board in protest against Gazprom-Media announcement to change the board in February 2012.[2]