From Infogalactic: the planetary knowledge core
Jump to: navigation, search
For the topology of pointwise convergence, see Algebraic topology (object). 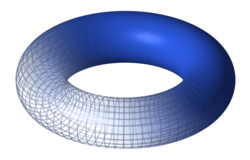 A torus, one of the most frequently studied objects in algebraic topology

Below are some of the main areas studied in algebraic topology:

In algebraic topology and abstract algebra, homology (in part from Greek ὁμός homos "identical") is a certain general procedure to associate a sequence of abelian groups or modules with a given mathematical object such as a topological space or a group.[1]

In homology theory and algebraic topology, cohomology is a general term for a sequence of abelian groups defined from a co-chain complex. That is, cohomology is defined as the abstract study of cochains, cocycles, and coboundaries. Cohomology can be viewed as a method of assigning algebraic invariants to a topological space that has a more refined algebraic structure than does homology. Cohomology arises from the algebraic dualization of the construction of homology. In less abstract language, cochains in the fundamental sense should assign 'quantities' to the chains of homology theory.

Knot theory is the study of mathematical knots. While inspired by knots that appear in daily life in shoelaces and rope, a mathematician's knot differs in that the ends are joined together so that it cannot be undone. In precise mathematical language, a knot is an embedding of a circle in 3-dimensional Euclidean space, R3. Two mathematical knots are equivalent if one can be transformed into the other via a deformation of R3 upon itself (known as an ambient isotopy); these transformations correspond to manipulations of a knotted string that do not involve cutting the string or passing the string through itself.

A CW complex is a type of topological space introduced by J. H. C. Whitehead to meet the needs of homotopy theory. This class of spaces is broader and has some better categorical properties than simplicial complexes, but still retains a combinatorial nature that allows for computation (often with a much smaller complex).

An older name for the subject was combinatorial topology, implying an emphasis on how a space X was constructed from simpler ones[2] (the modern standard tool for such construction is the CW-complex). In the 1920s and 1930s, there was growing emphasis on investigating topological spaces by finding correspondences from them to algebraic groups, which led to the change of name to algebraic topology.[3] The combinatorial topology name is still sometimes used to emphasize an algorithmic approach based on decomposition of spaces.[4]

In the algebraic approach, one finds a correspondence between spaces and groups that respects the relation of homeomorphism (or more general homotopy) of spaces. This allows one to recast statements about topological spaces into statements about groups, which have a great deal of manageable structure, often making these statement easier to prove. Two major ways in which this can be done are through fundamental groups, or more generally homotopy theory, and through homology and cohomology groups. The fundamental groups give us basic information about the structure of a topological space, but they are often nonabelian and can be difficult to work with. The fundamental group of a (finite) simplicial complex does have a finite presentation.

Homology and cohomology groups, on the other hand, are abelian and in many important cases finitely generated. Finitely generated abelian groups are completely classified and are particularly easy to work with.

In general, all constructions of algebraic topology are functorial; the notions of category, functor and natural transformation originated here. Fundamental groups and homology and cohomology groups are not only invariants of the underlying topological space, in the sense that two topological spaces which are homeomorphic have the same associated groups, but their associated morphisms also correspond — a continuous mapping of spaces induces a group homomorphism on the associated groups, and these homomorphisms can be used to show non-existence (or, much more deeply, existence) of mappings.

One of the first mathematicians to work with different types of cohomology was Georges de Rham. One can use the differential structure of smooth manifolds via de Rham cohomology, or Čech or sheaf cohomology to investigate the solvability of differential equations defined on the manifold in question. De Rham showed that all of these approaches were interrelated and that, for a closed, oriented manifold, the Betti numbers derived through simplicial homology were the same Betti numbers as those derived through de Rham cohomology. This was extended in the 1950s, when Eilenberg and Steenrod generalized this approach. They defined homology and cohomology as functors equipped with natural transformations subject to certain axioms (e.g., a weak equivalence of spaces passes to an isomorphism of homology groups), verified that all existing (co)homology theories satisfied these axioms, and then proved that such an axiomatization uniquely characterized the theory.

Classic applications of algebraic topology include: