Ali Akbar Rashad is a graduate of Tehran and Qom Islmaic seminaries; he completed his introductory and first grade (studies based on textbooks) of Islmaic seminary education under the supervision of Kamali, Mohammadzadeh Mazinâni, Ali Afkhami (Afkham Rezâyi), Ayatollah Zanjani Najafi, Ayatollah Abd-os-Samad Khooyi in Tehran between 1967 and 1970. Then, he went to Qom to further his education in 1970, and was admitted to Grand Ayatollah Golpayegani Islamic Seminary school, which was considered the first scheduled educational center conducted on the new seminary methodology.

Rashad is the founder and chair of IICT, which is considered one of the most prominent non-governmental religious and academic research institutes. The institute is composed of five research centers and five affiliate institutes as well as twenty scientific departments in the fields of philosophy, epistemology, mysticism, Quranic research, philosophy of religion, discourse, logic of Understanding Religion, ethics, jurisprudence, politics, economics, Islamic management, occidental studies, history and civilization, cultural studies, Islamic revolution, contemplative literature, and so forth.

IICT, having been established with the impetus towards contributing to the contemporary intellectual debates and towards attempts to criticize and theorize in the aforesaid fields and areas in the spring of 1994, and is currently publishing nine different scientific magazines with the following titles, in addition to eight hundred other publications all being the outgrowth of the researches and investigations carried out by its departments: ‘Qabasat’ (specialized in philosophy of religion/ ISI ranking), ‘Zehn’ [the Mind] (specialized in epistemology), ‘Eqtesad-e Eslami’ (Islamic Economics) (ISI ranking), ‘Hoqooq-e Eslami’ (Islamic Law) (ISI ranking), ‘Ketab-e Naqd’ (the Book of Criticism) (on thoughts and thoughts criticism), the International Journal of Philosophy of Religion (in English), ‘Qabasat’ International Journal on Islamic social systems (in Arabic), ‘Zamaneh’ [Era] monthly (specialized in contemporary history and political sociology of Iran), and ‘Hashieh’ [the Gloss] monthly (for seminary students and learned youth).

In the past ten years, IICT has compiled, or has been compiling, four different encyclopedias under professor Rashad’s supervision:

Dr. Rashad is currently a member of the Supreme Council of Cultural Revolution, chair of the Board of Supporting Theorizing Platforms, and chair of the council of the Islamic seminaries of the province of Tehran; in addition, he has founded the International Institute of the Islamic Philosophy, and is a founding member as well as the head of the Academic Association of the Principles of Jurisprudence at the Islamic Seminary.

Professor Rashad was entitled the eminent theorizer by Farabi International Festival in 2009, and was awarded prizes and certificates of appreciation by UNESCO, ISESCO, Islamic Republic of Iran’s Presidency, and Ministry of Science, Research and Technology (Iran). 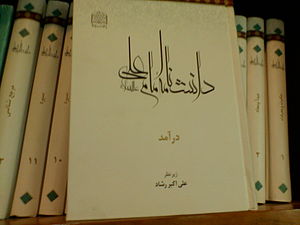 The Cover of the Book: Encyclopedia of Imam Ali in Persian Language; 13 volumes

The program set out in 1999 with its aim being designing and offering a “comprehensive logic of understanding religion” based on “Ibtina Theory”. The program includes:

The aim of the program, carried out cooperatively, is to infer humanism from the Holy Qoran

Ten philosophical questions on philosophy of religion will be asked of two hundred contemporary philosophers, and after their opinions and inputs have been categorized and analyzed, they will be codified and published in four different languages.