Ali Shariati (Persian: علی شریعتی‎‎,  23 November 1933 – 19 June 1977) was an Iranian revolutionary[1] and sociologist who focused on the sociology of religion. He is held as one of the most influential Iranian intellectuals of the 20th century[2] and has been called the 'ideologue of the Iranian Revolution'.[3]

Ali Shariati (Ali Mazinani) was born in 1933 in Kahak (a village in Mazinan), a suburb of Sabzevar, found in northeastern Iran.[4] His father's family were clerics.[5] His father, Mohammad-Taqi, was a teacher and Islamic scholar, who opened in 1947 the 'Centre for the Propagation of Islamic Truths' in Mashhad, in the Khorasan Province,[6] a social Islamic forum which became embroiled in the oil nationalisation movement of the 1950s.[7] Shariati's mother was from a small land-owning family.[5]

In his years at the Teacher's Training College in Mashhad, Shariati came into contact with young people who were from the less privileged economic classes of the society, and for the first time saw the poverty and hardship that existed in Iran during that period. At the same time he was exposed to many aspects of Western philosophical and political thought. He attempted to explain and provide solutions for the problems faced by Muslim societies through traditional Islamic principles interwoven with and understood from the point of view of modern sociology and philosophy. His articles from this period for the Mashhad daily newspaper, Khorasan, display his developing eclecticism and acquaintance with the ideas of modernist thinkers such as Jamal al-Din al-Afghani, Sir Allama Muhammad Iqbal of Pakistan, among Muslims and Sigmund Freud and Alexis Carrel.[8]

In 1952, he became a high-school teacher and founded the Islamic Students' Association, which led to his arrest after a demonstration. In 1953, the year of Mossadeq's overthrow, he became a member of the National Front. He received his bachelor's degree from the University of Mashhad in 1955. In 1957 he was arrested again by the police, along with 16 other members of the National Resistance Movement.

Shariati then managed to obtain a scholarship for France, where he continued his graduate studies at Sorbonne University in Paris. He worked towards earning his doctorate in sociology, leaving Paris after getting a PhD certificate in sociology in 1964 from Sorbonne University. During this period in Paris, Shariati started collaborating with the Algerian National Liberation Front (FLN) in 1959. The next year, he began to read Frantz Fanon and translated an anthology of his work into Persian.[9] Shariati would introduce Fanon's thought into Iranian revolutionary émigrée circles. He was arrested in Paris during a demonstration in honour of Patrice Lumumba, on 17 January 1961. 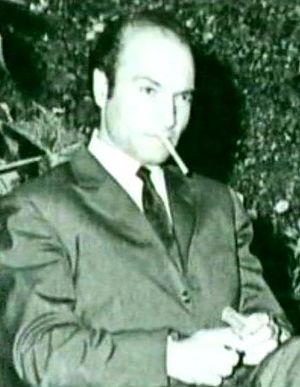 The same year he joined Ebrahim Yazdi, Mostafa Chamran and Sadegh Qotbzadeh in founding the Freedom Movement of Iran abroad. In 1962, he continued studying sociology and history of religions, and followed the courses of Islamic scholar Louis Massignon, Jacques Berque and the sociologist Georges Gurvitch. He also came to know the philosopher Jean-Paul Sartre that same year, and published in Iran Jalal Al-e Ahmad's book Gharbzadegi (or Occidentosis).

He then returned to Iran in 1964 where he was arrested and imprisoned for engaging in subversive political activities while in France. He was released after a few weeks, at which point he began teaching at the University of Mashhad.

Shariati then went to Tehran where he began lecturing at the Hosseiniye Ershad Institute. These lectures proved to be hugely popular among his students and were spread by word of mouth throughout all economic sectors of the society, including the middle and upper classes where interest in Shariati's teachings began to grow immensely.

Shariati's continued success again aroused the interest of the government, which arrested him, as well as many of his students. Widespread pressure from the populace and an international outcry eventually led to his release after eighteen months in solitary confinement, and he was released on 20 March 1975.

Shariati was allowed to leave the country for England. He died three weeks later in a Southampton hospital under 'mysterious circumstances' although in Ali Rahnema's biography of Shariati, he is said to have died of a fatal heart attack. Shariati is buried next to Sayyidah Zaynab, the granddaughter of the Islamic prophet Muhammad and the daughter of Hazrat Ali in Damascus, Syria, where Iranian pilgrims frequently visit. 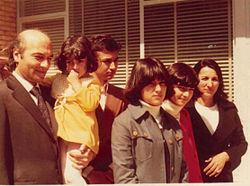 Ali Shariati and his family, one day after his release from prison.

Shariati developed a fully novel approach to Shiism and interpreted the religion in a revolutionary manner.[10] His interpretation of Shiism encouraged revolution in the world and promised salvation after death.[11] Shariati referred to his brand of Shiism as "red Shiism" which he contrasted with clerical-dominated, unrevolutionary "black Shiism" or Safavid Shiism.[12] His ideas have been compared to the Catholic Liberation Theology movement founded in South America by Peruvian Gustavo Gutierrez and Brazilian Leonardo Boff.[13]

Shariati was a prominent Islamist philosopher who argued that a good society would conform to Islamic values; he suggested that the role of government was to guide society in the best possible manner rather than manage society in the best possible manner.[14] Shariati believed that the most learned members of the Ulema (clergy) should play a leadership role in guiding society because they best understand how to administer an Islamic value system based on the teachings of the Prophets of God and the 12 Shia Twelver Imams.[15] He argued that the role of the clergy was to guide society in accordance with Islamic values to advance human beings towards reaching their highest potential—not to provide/serve the hedonistic desires of individuals as in the West.[15]

Shariati's works were highly influenced by the Third Worldism that he encountered as a student in Paris—ideas that class war and revolution would bring about a just and classless society—from one side, and the epistemic Decolonization thinking of his time from the other side. He is said to have adopted the idea of Gharbzadegi from Jalal Al-e Ahmad and given it "its most vibrant and influential second life."[16]

He sought to translate these ideas into cultural symbols of Shiism that Iranians could relate to. He believed Shia should not merely await the return of the 12th Imam but should actively work to hasten his return by fighting for social justice, "even to the point of embracing martyrdom", saying "everyday is Ashoura, every place is Karbala."[17] Shariati had a dynamic view about Islam. His ideology about Islam is closely related to Allama Iqbal's ideology; for example, according to both intellectuals, change is the greatest law of nature and Islam.

Shariati's most important books and speeches