Alliteration is a stylistic literary device identified by the repeated sound of the first consonant in a series of multiple words, or the repetition of the same sounds of the same kinds of sounds at the beginning of words or in stressed syllables of a phrase.[1] "Alliteration" from the Latin word “litera”, meaning “letters of the alphabet”, and the first known use of the word to refer to a literary device occurred around 1624.[2] Alliteration narrowly refers to the repetition of a consonant in any syllables that, according to the poem's meter, are stressed,[3][4][5] as in James Thomson's verse "Come…dragging the lazy languid Line along".[6] Another example is, "Peter Piper picked a peck of pickled peppers".

Consonance (ex: As the wind will bend) is another 'phonetic agreement' akin to alliteration. It refers to the repetition of consonant sounds. Alliteration is a special case of consonance where the repeated consonant sound is at the stressed syllable.[7] Alliteration may also include the use of different consonants with similar properties[8] such as alliterating z with s, as does the author of Sir Gawain and the Green Knight, or as Anglo-Saxon (Old English) poets would alliterate hard/fricative g with soft g (the latter exemplified in some courses as the letter yogh - ȝ - pronounced like the y in yarrow or the j in Jotunheim); this is known as license.[citation needed]

There is one specialised form of alliteration called Symmetrical Alliteration. That is, alliteration containing parallelism.[9] In this case, the phrase must have a pair of outside end words both starting with the same sound, and pairs of outside words also starting with matching sounds as one moves progressively closer to the centre. For example, "rust brown blazers rule", "purely and fundamentally for analytical purposes" or "fluoro colour co-ordination forever". Symmetrical alliteration is similar to palindromes in its use of symmetry. 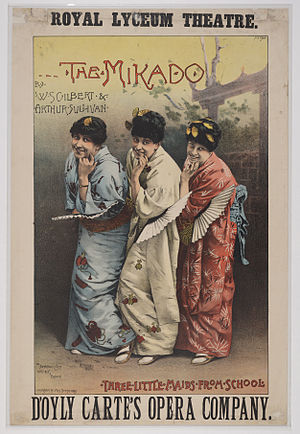 Gilbert and Sullivan's comic opera The Mikado is the source of a well known example of alliterative lyrics:[10]
"To sit in solemn silence in a dull, dark dock,
In a pestilential prison, with a lifelong lock,
Awaiting the sensation of a short, sharp shock,
From a cheap and chippy chopper on a big black block!"[11]

Alliteration is used in the alliterative verse of Old English, Old Norse, Old High German, Old Saxon, and Old Irish. It was an important ingredient of the Sanskrit shlokas.[12][13] Alliteration was used in Old English given names.[14] This is evidenced by the unbroken series of 9th century kings of Wessex named Æthelwulf, Æthelbald, Æthelberht, and Æthelred. These were followed in the 10th century by their direct descendants Æthelstan and Æthelred II, who ruled as kings of England.[15] The Anglo-Saxon saints Tancred, Torhtred and Tova provide a similar example, among siblings.[16]

In relation to English poetry, poets can call attention to certain words in a line of poetry by using alliteration. They can also use alliteration to create a pleasant, rhythmic effect. In the following poetic lines, notice how alliteration is used to emphasize words and to create rhythm:

“They all gazed and gazed upon this green stranger,/because everyone wondered what it could mean/ that a rider and his horse could be such a colour-/ green as grass, and greener it seemed/ than green enamel glowing bright against gold". (232-236) Sir Gawain and the Green Knight, translated by Bernard O'Donoghue

"Some papers like writers, some like wrappers. Are you a writer or a wrapper?" Carl Sandburg, "Paper I"

Alliteration can also add to the mood of a poem. If a poet repeat soft, melodious sounds, a calm or dignified mood can result. If harsh, hard sound are repeated, on the other hand, the mood can become tense or excited. In this poem, alliteration of the s, l, and f sound adds to a hushed, peaceful mood:

"Softer be they than slippered sleep the lean lithe deer the fleet flown deer." E. E. Cummings "All in green went my love riding" [17]

The term "alliteration" has many potential uses in the various spheres of public speaking and rhetoric as far as persuasion is concerned. Additionally the use of alliteration can be considered an artistic constraint that is used by the Rhetor in a rhetorical situation. An artistic constraint is one that the Rhetor creates out of his or her own need to sway the audience to feel some type of urgency, or perhaps even lack of urgency, in regards to a rhetorical situation being presented.[18] Such examples of Alliteration as an artistic constraint can be seen when it is used to create an emotional effect on the audience. For example: H or E sounds can sooth where as a P or a B sound can be percussive and attention grabbing. S sounds can imply danger or make the audience feel as if they are being deceived[19] Alliteration also serves as a linguistic rhetorical device more commonly used in persuasive public speaking. Rhetoric is broadly defined as the "Art of Persuasion", which has from earliest times been concerned with specific techniques for effective communication.[20] Alliteration serves to "intensify any attitude being signified".[20]:6–7 Its significance as a rhetorical device is that it adds a textural complexity to a speech, making it more engaging, moving, and memorable. The use of alliteration[21] in a speech captivates a person's auditory senses that assists in creating a mood for the speaker. The use of a repeating sound or letter forces an audience’s attention because of their distinct and noticeable nature. The auditory senses, hearing and listening, seem to perk up and pay attention with the constant sounds of alliteration. It also evokes emotion which is key in persuading an audience. The idea of pathos solidifies that playing to a person's emotions is key in persuading them and connecting them to the argument that is being made. For example, the use of a "H" sound can produce a feeling of calmness.[22] Other sounds can create feelings of happiness, discord, or anger, depending on the context of the alliteration. These feelings become memorable to a listener, which have been created by alliteration.

The most common example of this is in John F. Kennedy's Inaugural Address, where he uses alliteration twenty-one times throughout his speech. The last paragraph of his speech is given as an example here.

"Finally, whether you are citizens of America or citizens of the world, ask of us here the same high standards of strength and sacrifice (ALLITERATION) which we ask of you. With a good conscience our only sure reward, with history the final judge of our deeds, let us go forth to lead the land we love (ALLITERATION), asking His blessing and His help, but knowing that here on earth God's work must truly be our own." –JFK[23]

Other examples of alliteration in some famous speeches:

Alliteration is commonly used in modern music but is also seen in magazine article titles, advertisements, business names, comic strips, television shows, video games and in the dialogue and naming of cartoon characters.[27]

An example would be Tupac Shakur's "If I Die 2Nite" off his Me Against The World release.