From Infogalactic: the planetary knowledge core
Jump to: navigation, search
For the term for someone whose native language is not French or English, see Allophone (Quebec). 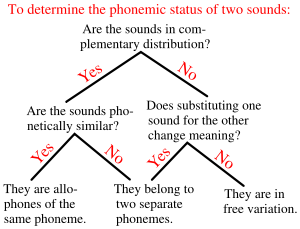 A simplified procedure for determining whether two sounds represent the same or different phonemes. The cases on the extreme left and extreme right are those in which the sounds are allophones.

In phonology, an allophone (/ˈæləfoʊn/; from the Greek: ἄλλος, állos, "other" and φωνή, phōnē, "voice, sound") is one of a set of multiple possible spoken sounds (or phones) or signs used to pronounce a single phoneme in a particular language.[1] For example, [pʰ] (as in pin) and [p] (as in spin) are allophones for the phoneme /p/ in the English language. The specific allophone selected in a given situation is often predictable from the phonetic context (such allophones are called positional variants), but sometimes allophones occur in free variation. Replacing a sound by another allophone of the same phoneme will usually not change the meaning of a word, although sometimes the result may sound non-native or even unintelligible. Native speakers of a given language usually perceive one phoneme in that language as a single distinctive sound, and are "both unaware of and even shocked by" the allophone variations used to pronounce single phonemes.[2][3]

The term "allophone" was coined by Benjamin Lee Whorf in the 1940s. In doing so, he placed a cornerstone in consolidating early phoneme theory.[4] The term was popularized by G. L. Trager and Bernard Bloch in a 1941 paper on English phonology[5] and went on to become part of standard usage within the American structuralist tradition.[6]

Every time a speech sound is produced for a given phoneme, it will be slightly different from other utterances, even for the same speaker. This has led to some debate over how real, and how universal, phonemes really are (see phoneme for details). Only some of the variation is significant (i.e., detectable or perceivable) to speakers. There are two types of allophones, based on whether a phoneme must be pronounced using a specific allophone in a specific situation, or whether the speaker has freedom to (unconsciously) choose which allophone to use.

In other cases, the speaker is able to select freely from free variant allophones, based on personal habit or preference.

A tonic allophone is sometimes called an allotone, for example in the neutral tone of Mandarin.

Because the choice of allophone is seldom under conscious control, people may not realize they exist. English speakers may be unaware of the differences among six allophones of the phoneme /t/, namely unreleased [ t̚] as in cat, aspirated [tʰ] as in top, glottalized [ʔ] as in button, flapped [ɾ] as in American English water, nasalized flapped as in winter, and none of the above [t] as in stop. However, they may become aware of the differences if, for example, they contrast the pronunciations of the following words:

If a flame is held before the lips while these words are spoken, it flickers more during aspirated nitrate than during unaspirated night rate. The difference can also be felt by holding the hand in front of the lips. For a Mandarin speaker, to whom /t/ and /tʰ/ are separate phonemes, the English distinction is much more obvious than it is to the English speaker who has learned since childhood to ignore it.

There are many examples for allophones in languages other than English. Typically, languages with a small phoneme inventory allow for quite a lot of allophonic variation. (See e.g. Hawaiian and Toki Pona.) Examples: (Links of language names go to the specific article or subsection on the phenomenon.)

Representing a phoneme with an allophone

Since phonemes are abstractions of speech sounds, not the sounds themselves, they have no direct phonetic transcription. When they are realized without much allophonic variation, a simple broad transcription is used. However, when there are complementary allophones of a phoneme, so that the allophony is significant, things become more complicated. Often, if only one of the allophones is simple to transcribe, in the sense of not requiring diacritics, then that representation is chosen for the phoneme.

However, there may be several such allophones, or the linguist may prefer greater precision than this allows. In such cases a common convention is to use the "elsewhere condition" to decide which allophone will stand for the phoneme. The "elsewhere" allophone is the one that remains once the conditions for the others are described by phonological rules. For example, English has both oral and nasal allophones of its vowels. The pattern is that vowels are nasal only when preceding a nasal consonant within the same syllable; elsewhere they're oral. Therefore, by the "elsewhere" convention, the oral allophones are considered basic; nasal vowels in English are considered to be allophones of oral phonemes.

In other cases, an allophone may be chosen to represent its phoneme because it is more common in the world's languages than the other allophones, because it reflects the historical origin of the phoneme, or because it gives a more balanced look to a chart of the phonemic inventory. Another alternative, commonly employed for archiphonemes, is the use of a capital letter, such as /N/ for [m], [n], [ŋ].

In rare cases a linguist may represent phonemes with abstract symbols, such as dingbats, so as not to privilege any one allophone.