The Almagest /ˈælmədʒɛst/ is a 2nd-century Greek-language mathematical and astronomical treatise on the apparent motions of the stars and planetary paths, written by Claudius Ptolemy (c. AD 100 – c. 170). One of the most influential scientific texts of all time, it canonized a geocentric model of the Universe that was accepted for more than 1200 years from its origin in Hellenistic Alexandria, in the medieval Byzantine and Islamic worlds, and in Western Europe through the Middle Ages and early Renaissance until Copernicus. It is also a key source of information about ancient Greek astronomy.

File:Claudius Ptolemaeus, Almagestum, 1515.djvu Ptolemy set up a public inscription at Canopus, Egypt, in 147 or 148. N. T. Hamilton found that the version of Ptolemy's models set out in the Canopic Inscription was earlier than the version in the Almagest. Hence the Almagest could not have been completed before about 150, a quarter-century after Ptolemy began observing.[1][pages needed][2]

The work was originally titled "Μαθηματικὴ Σύνταξις" (Mathēmatikē Syntaxis) in Ancient Greek, and also called Syntaxis Mathematica in Latin. The treatise was later titled Hē Megalē Syntaxis (Ἡ Μεγάλη Σύνταξις, "The Great Treatise"; Latin: Magna Syntaxis), and the superlative form of this (Ancient Greek: μεγίστη, megiste, "greatest") lies behind the Arabic name al-majisṭī (المجسطي), from which the English name Almagest derives. The Arabic name is important due to the popularity of a Latin translation known as Almagestum made in the 12th century from an Arabic translation, which would endure until original Greek copies resurfaced in the 15th century.

The Syntaxis Mathematica consists of thirteen sections, called books. As with many medieval manuscripts that were handcopied or, particularly, printed in the early years of printing, there were considerable differences between various editions of the same text, as the process of transcription was highly personal. An example illustrating how the Syntaxis was organized is given below. It is a Latin edition printed in 1515 at Venice by Petrus Lichtenstein.[3]

The cosmology of the Syntaxis includes five main points, each of which is the subject of a chapter in Book I. What follows is a close paraphrase of Ptolemy's own words from Toomer's translation.[5]

As mentioned, Ptolemy includes a star catalog containing 1022 stars. He says that he "observed as many stars as it was possible to perceive, even to the sixth magnitude", and that the ecliptic longitudes are for the beginning of the reign of Antoninus Pius (138 AD). But calculations show that his ecliptic longitudes correspond more closely to around 58 AD. He states that he found that the longitudes had increased by 2° 40′ since the time of Hipparchos. This is the amount of axial precession that occurred between the time of Hipparchos and 58 AD. It appears therefore that Ptolemy took a star catalog of Hipparchos and simply added 2° 40′ to the longitudes.[7] However, the figure he used seems to have been based on Hipparchos' own estimate for precession, which was 1° in 100 years, instead of the correct 1° in 72 years. Dating attempts through proper motion of the stars also appear to date the actual observation to Hipparchos' time instead of Ptolemy.[8]

Many of the longitudes and latitudes have been corrupted in the various manuscripts. Most of these errors can be explained by similarities in the symbols used for different numbers. For example, the Greek letters Α and Δ were used to mean 1 and 4 respectively, but because these look similar copyists sometimes wrote the wrong one. In Arabic manuscripts, there was confusion between for example 3 and 8 (ج and ح). (At least one translator also introduced errors. Gerard of Cremona, who translated an Arabic manuscript into Latin around 1175, put 300° for the latitude of several stars. He had apparently learned from Moors, who used the letter "sin" for 300 (like the Hebrew "shin"), but the manuscript he was translating came from the East, where "sin" was used for 60, like the Hebrew "samech".)[9]

Even without the errors introduced by copyists, and even accounting for the fact that the longitudes are more appropriate for 58 AD than for 137 AD, the latitudes and longitudes are not very accurate, with errors of large fractions of a degree. Some errors may be due to atmospheric refraction causing stars that are low in the sky to appear higher than where they really are.[10] A series of stars in Centaurus are off by a couple degrees, including the star we call Alpha Centauri. These were probably measured by a different person or persons from the others, and in an inaccurate way.[11] 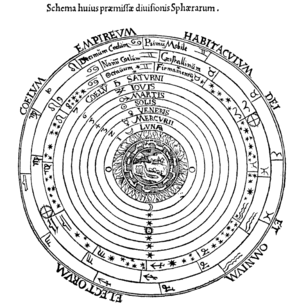 Ptolemy assigned the following order to the planetary spheres, beginning with the innermost:

Other classical writers suggested different sequences. Plato (c. 427 – c. 347 BC) placed the Sun second in order after the Moon. Martianus Capella (5th century AD) put Mercury and Venus in motion around the Sun. Ptolemy's authority was preferred by most medieval Islamic and late medieval European astronomers.

Ptolemy inherited from his Greek predecessors a geometrical toolbox and a partial set of models for predicting where the planets would appear in the sky. Apollonius of Perga (c. 262 – c. 190 BC) had introduced the deferent and epicycle and the eccentric deferent to astronomy. Hipparchus (2nd century BC) had crafted mathematical models of the motion of the Sun and Moon. Hipparchus had some knowledge of Mesopotamian astronomy, and he felt that Greek models should match those of the Babylonians in accuracy. He was unable to create accurate models for the remaining five planets.

The Syntaxis adopted Hipparchus' solar model, which consisted of a simple eccentric deferent. For the Moon, Ptolemy began with Hipparchus' epicycle-on-deferent, then added a device that historians of astronomy refer to as a "crank mechanism":[12] He succeeded in creating models for the other planets, where Hipparchus had failed, by introducing a third device called the equant.

Ptolemy wrote the Syntaxis as a textbook of mathematical astronomy. It explained geometrical models of the planets based on combinations of circles, which could be used to predict the motions of celestial objects. In a later book, the Planetary Hypotheses, Ptolemy explained how to transform his geometrical models into three-dimensional spheres or partial spheres. In contrast to the mathematical Syntaxis, the Planetary Hypotheses is sometimes described as a book of cosmology.

Ptolemy's comprehensive treatise of mathematical astronomy superseded most older texts of Greek astronomy. Some were more specialized and thus of less interest; others simply became outdated by the newer models. As a result, the older texts ceased to be copied and were gradually lost. Much of what we know about the work of astronomers like Hipparchus comes from references in the Syntaxis. 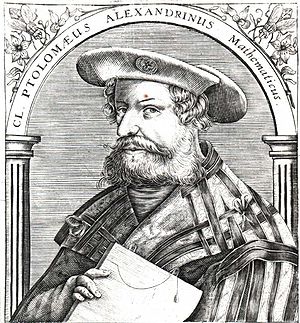 Ptolemy's Almagest became an authoritative work for many centuries.

The first translations into Arabic were made in the 9th century, with two separate efforts, one sponsored by the caliph Al-Ma'mun, who received a copy as a condition of peace with the Byzantine emperor.[13] Sahl ibn Bishr is thought to be the first Arabic translator.

No Latin translation was made in the Ancient Rome nor the Medieval West before the 12th century. Henry Aristippus made the first Latin translation directly from a Greek copy, but it was not as influential as a later translation into Latin made by Gerard of Cremona from the Arabic (finished in 1175).[14] Gerard translated the Arabic text while working at the Toledo School of Translators, although he was unable to translate many technical terms such as the Arabic Abrachir for Hipparchus. In the 12th century a Spanish version was produced, which was later translated under the patronage of Alfonso X. 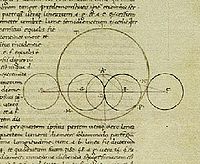 In the 15th century, a Greek version appeared in Western Europe. The German astronomer Johannes Müller (known, from his birthplace of Königsberg, as Regiomontanus) made an abridged Latin version at the instigation of the Greek churchman Johannes, Cardinal Bessarion. Around the same time, George of Trebizond made a full translation accompanied by a commentary that was as long as the original text. George's translation, done under the patronage of Pope Nicholas V, was intended to supplant the old translation. The new translation was a great improvement; the new commentary was not, and aroused criticism.[citation needed] The Pope declined the dedication of George's work,[citation needed] and Regiomontanus's translation had the upper hand for over 100 years.

During the 16th century, Guillaume Postel, who had been on an embassy to the Ottoman Empire, brought back Arabic disputations of the Almagest, such as the works of al-Kharaqī, Muntahā al-idrāk fī taqāsīm al-aflāk ("The Ultimate Grasp of the Divisions of Spheres", 1138/9).[15]

Commentaries on the Syntaxis were written by Theon of Alexandria (extant), Pappus of Alexandria (only fragments survive), and Ammonius Hermiae (lost).

Three translations of the Almagest into English have been published. The first, by R. Catesby Taliaferro of St. John's College in Annapolis, Maryland, was included in volume 16 of the Great Books of the Western World in 1952. The second, by G. J. Toomer, Ptolemy's Almagest in 1984, with a second edition in 1998.[5] The third was a partial translation by Bruce M. Perry in The Almagest: Introduction to the Mathematics of the Heavens in 2014.[16]

A direct French translation from the Greek text was published in two volumes in 1813 and 1816 by Nicholas Halma, including detailed historical comments in a 69-page preface. The scanned books are available in full at the Gallica French national library.[17][18]