From Infogalactic: the planetary knowledge core
(Redirected from Almanacs)
Jump to: navigation, search
For other uses, see Almanac (disambiguation). 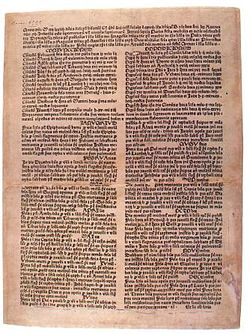 Calendarium cracoviense, an almanac for the year 1474

An almanac (also spelled almanack and almanach) is an annual publication that includes information such as weather forecasts, farmers' planting dates, tide tables, and tabular information often arranged according to the calendar. Astronomical data and various statistics are found in almanacs, such as the times of the rising and setting of the sun and moon, eclipses, hours of full tide, church festivals, and so on.

The etymology of the word is unclear, but there are several theories:

The reason why the proposed Arabic word is speculatively spelled al-manākh is that the spelling occurred as "almanach" as well as almanac (and Roger Bacon used both spellings). The earliest use of the word was in the context of astronomy calendars.

The prestige of the Tables of Toledo and other medieval Arabic astronomy works at the time of the word's emergence in the West, together with the absence of the word in Arabic, suggest it may have been invented in the West, and is pseudo-Arabic. At that time in the West, it would have been prestigious to attach an Arabic appellation to a set of astronomical tables. Also around that time, prompted by that motive, the Latin writer Pseudo-Geber wrote under an Arabic pseudonym. (The later alchemy word alkahest is known to be pseudo-Arabic.)

An almanac is text listing a set of events forthcoming in the next year. A calendar, which is a system for time keeping, in written form is usually produced as a most simple almanac: it includes additional information about the day of the week on which a particular day falls, major holidays, the phases of the moon etc. The set of events noted in an almanac are selected in view of a more or less specific group of readers e.g. farmers, sailors, astronomers or others.

The earlier texts considered to be almanacs have been found in the Near east, dating back to the middle of the second millennium BCE. They have been called generally hemerologies, from the Greek hēmerā, meaning 'day'. Among them is the so-called Babylonian Almanac, which lists favorable and unfavorable days with advice on what to do on each of them. Successive variants and versions aimed at different readership have been found.[5] Egyptians lists for good and bad moments, three times each day, have also been found. Many of these prognostics were connected with celestial events.[6][7] [8] The flooding of the Nile valley, a most important event in ancient Egypt, was expected to occur at the summer solstice but as the civil calendar had exactly 365 days, over the centuries the date was drifting in the calendar.[9] The first heliacal rising of Sirius was used for its prediction and this practice, the observation of some star and its connecting to some event apparently spread.

The Greek almanac, known as parapegma, has existed in the form an inscribed stone on which the days of the month were indicated by movable pegs inserted into bored holes, hence the name. There were also written texts and according to Diogenes Laërtius, Parapegma was the title of a book by Democritus.[10] Ptolemy, the Alexandrian astronomer (2nd century) wrote a treatise, Phaseis—"phases of fixed stars and collection of weather-changes" is the translation of its full title—the core of which is a parapegma, a list of dates of seasonally regular weather changes, first appearances and last appearances of stars or constellations at sunrise or sunset, and solar events such as solstices, all organized according to the solar year. With the astronomical computations were expected weather phenomena, composed as a digest of observations made by various authorities of the past. Parapegmata had been composed for centuries.

Ptolemy believed that astronomical phenomena caused the changes in seasonal weather; his explanation of why there was not an exact correlation of these events was that the physical influences of other heavenly bodies also came into play. Hence for him, weather prediction was a special division of astrology.[11]

The origins of the almanac can be connected to ancient Babylonian astronomy, when tables of planetary periods were produced in order to predict lunar and planetary phenomena.[12] Similar treatises called Zij were later composed in medieval Islamic astronomy. The modern almanac differs from Babylonian, Ptolemaic and Zij tables in the sense that "the entries found in the almanacs give directly the positions of the celestial bodies and need no further computation", in contrast to the more common "auxiliary astronomical tables" based on Ptolemy's Almagest. The earliest known almanac in this modern sense is the Almanac of Azarqueil written in 1088 by Abū Ishāq Ibrāhīm al-Zarqālī (Latinized as Arzachel) in Toledo, al-Andalus. The work provided the true daily positions of the sun, moon and planets for four years from 1088 to 1092, as well as many other related tables. A Latin translation and adaptation of the work appeared as the Tables of Toledo in the 12th century and the Alfonsine tables in the 13th century.[13][verification needed]

After almanacs were devised, people still saw little difference between predicting the movements of the stars and tides, and predicting the future in the divination sense. Early almanacs therefore contained general horoscopes, as well as the more concrete information. In 1150 Solomon Jarchus created such an almanac considered to be among the first modern almanacs. Copies of 12th century almanacs are found in the British Museum, and in the Universities of Oxford and Cambridge. In 1300, Petrus de Dacia created an almanac (Savilian Library, Oxford). This was the same year Roger Bacon, OFM, produced his as well. In 1327 Walter de Elvendene created an almanac and later on John Somers of Oxford, in 1380. In 1386 Nicholas de Lynne, Oxford produced an almanac. In 1457 the first printed almanac was published at Mainz, by Gutenberg (eight years before the famous Bible). Regio-Montanus produced an almanac in 1472 (Nuremberg, 1472), which was continued in print for several centuries in many editions. In 1497 the Sheapheard’s Kalendar, translated from French (Richard Pynson) became the first English printed almanac.

By the second half of the 16th century, yearly almanacs were being produced in England by men such as Anthony Askham, Thomas Buckminster, John Dade and Gabriel Frende. In the 17th century, English almanacs were bestsellers, second only to the Bible; by the middle of the century, 400,000 almanacs were being produced annually (a complete listing can be found in the English Short Title Catalogue). Until its deregulation in 1775, the Stationers' Company maintained a lucrative monopoly over almanac publication in England.[14] Richard Allestree (who is not the same as this Richard Allestree) wrote one of the more popular English almanacs, producing yearly volumes from 1617 to 1643, but his is by no means the earliest or the longest-running almanac.

In British America, William Pierce of Harvard College published the first American almanac entitled, An Almanac for New England for the year 1639 Cambridge, Massachusetts. Harvard became the first center for the annual publication of almanacs with various editors including Samuel Danforth, Oakes, Cheever, Chauncey, Dudley, Foster, et alia. An almanac maker going under the pseudonym of Poor Richard, Knight of the Burnt Island began to publish Poor Robin's Almanack one of the first comic almanacs that parodied these horoscopes in its 1664 issue, saying "This month we may expect to hear of the Death of some Man, Woman, or Child, either in Kent or Christendom." Other noteworthy comic almanacs include those published from 1687-1702 by John Tully of Saybrook, Connecticut.

Currently published almanacs such as Whitaker's Almanack have expanded their scope and contents beyond that of their historical counterparts. Modern almanacs include a comprehensive presentation of statistical and descriptive data covering the entire world. Contents also include discussions of topical developments and a summary of recent historical events. Other currently published almanacs (ca. 2006) include TIME Almanac with Information Please, World Almanac and Book of Facts, The Farmer's Almanac and The Old Farmer's Almanac and The Almanac for Farmers & City Folk. In 2007, Harrowsmith Country Life Magazine launched a Canadian Almanac, written in Canada, with all-Canadian content.

From 1985 to 1990, approximately 53% of all almanac sales sold in the United States were sold through the "Where in the World Is Carmen Sandiego? (1985)" computer game pack that included a complimentary World Almanac and Book of Facts.

The GPS almanac, as part of the data transmitted by each GPS satellite, contains coarse orbit and status information for all satellites in the constellation, an ionospheric model, and information to relate GPS derived time to Coordinated Universal Time (UTC). Hence the GPS almanac provide a similar goal as the ancient Babylonian almanac, to find celestial bodies.