Vašátko was born in Čelákovice on 25 August 1908. After graduating from a teachers' institute, he became a teacher in Litoměřice. A couple of months later he was drafted into the army. He finished his military service in 1929 and started studies at several army institutes. During 1937 he attended pilot training in Olomouc, and by September 1938 he was commanding officer of Letka C.14, equipped with the Letov Š-328 biplane.[2]

Following the first dissolution of Czechoslovakia and the annexation of Bohemia and Moravia by Nazi Germany, he fled the country. He travelled to France via Poland and after re-training at a fighter school at Chartres he joined Groupe de Chasse I/5. Flying a Curtiss 75, he shot down 3 aircraft solo, shared in 9 group kills and shared in two 'probables'. He became the most successful Czechoslovak fighter pilot in the Battle of France. 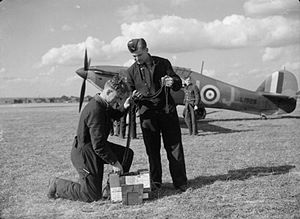 Armourers preparing ammunition belts, with Hurricane DU-J in which Vašátko helped shoot down a Junkers Ju 88 on 8 October 1940 in the background

After the retreat from France Vašátko took part in the Battle of Britain. As an RAF Pilot Officer he joined No. 312 (Czechoslovak) Squadron and, together with S/L Denys Gillam and Sgt. Josef Stehlík, scored its first victory, when they downed a Junkers Ju 88 of Kampfgruppe 806 above Liverpool on 8 October 1940.[3][4]

On 5 June 1941 he was promoted to Squadron Leader and on 30 May 1942 he became Wing Commander of the newly created Czechoslovak Fighter Wing. He was killed in action on 23 June 1942, when he crashed into the sea after a dogfight with Focke-Wulf Fw 190s, colliding with the aircraft of Unteroffizier Wilhelm Reuschling from 7 staffel, Jagdgeschwader 2. Having no known grave, he is commemorated on the Runnymede Memorial by the Commonwealth War Graves Commission.[5]

He had been awarded many Czechoslovak and Allied orders and medals, including French Legion d’honneur – Chevalier, Croix de Guerre with seven palms, two golden stars and one silver star and the British Distinguished Flying Cross (D.F.C.), which he received on the day of his death.