From Infogalactic: the planetary knowledge core
Jump to: navigation, search
For other people of the same name, see Louis Bertrand (disambiguation).

Louis Jacques Napoléon Bertrand, better known by his pen name Aloysius Bertrand (20 April 1807 — 29 April 1841), was a French Romantic poet, playwright and journalist. He is famous for having introduced prose poetry in French literature,[1] and is considered a forerunner of the Symbolist movement. His masterpiece is the collection of prose poems Gaspard de la Nuit published posthumously in 1842; three of its poems were adapted to a homonymous piano suite by Maurice Ravel in 1908.

Born in Ceva on 20 April 1807, Louis Jacques Napoléon Bertrand was the son of Georges and Laure (or Laurine-Marie) Bertrand, née Davico. Georges Bertrand was born on 22 July 1768 at Sorcy-Saint-Martin[2] (or Saulieu, according to other sources[3][4]) into a family of soldiers. A gendarmerie lieutenant, he married his second wife during his stay in the Department of Montenotte (now the Province of Cuneo), Laure Davico (born 2 August 1782), on 3 June 1806 in Ceva. After the birth of Louis, the eldest, in 1807, a second son, Jean Balthazar, was born on 17 July 1808.

On 15 March 1812 Georges was appointed as gendarmerie captain in Spoleto, whose mayor was at the time Pierre-Louis Roederer. There, on 23 December, the poet's sister Isabella-Caroline (or Elizabeth) was born. On 3 September 1814 he was assigned to Mont-de-Marsan, where he made the acquaintance of Charles Jean Harel, then-prefect of the Department of Landes. Retiring at the end of August 1815, he left Landes and moved to Dijon, where on 19 March 1816 his fourth child was born, Charles Frédéric (who later became a journalist).

While in Dijon Aloysius developed an interest in the Burgundian capital. His contributions to a local paper led to recognition by Victor Hugo and Sainte-Beuve. He lived in Paris for a short time. He returned to Dijon and continued writing for local newspapers. Gaspard was sold in 1836 but not published until 1842 after his death from tuberculosis. The book was rediscovered by Charles Baudelaire and Stéphane Mallarmé. It is now considered a classic of poetic and fantastic literature.[citation needed] He is also considered as a Poète maudit, like Petrus Borel or Alice de Chambrier. He died in Paris. 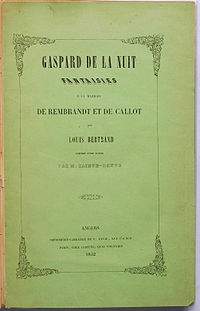