The American Independent Party (AIP) is a far right political party of the United States that was established in 1967 by Bill Shearer and his wife, Eileen Shearer of California. It is most notable for its nomination of former Governor George Wallace of Alabama, who carried five states in the 1968 presidential election running on a segregationist platform against Richard M. Nixon and Hubert H. Humphrey. The party split in 1976 into the modern American Independent Party and the American Party. From 1992 until 2008 the party was the California affiliate of the national Constitution Party, with its exit from the Constitution Party leading to a leadership dispute during the 2008 election.

In 1968, the AIP Party nominated George C. Wallace as its presidential candidate and retired U.S. Air Force General Curtis E. LeMay as the vice-presidential candidate. Wallace ran on every state ballot in the 1968 presidential election, though he did not represent the American Independent Party in all fifty states: in Connecticut, for instance, he was listed on the ballot as the nominee of the "George Wallace Party." The Wallace/LeMay ticket received 13.5 percent of the popular vote and 46 electoral votes from the states of Arkansas, Louisiana, Mississippi, Georgia, and Alabama. This is very notable considering that the 1968 election was the last time in American history where a 3rd party candidate actually won at least 1 state's Electoral votes. Although in later Presidential elections the 3rd party did still get some electoral votes but not those from entire states.

In 1969, representatives from forty states established the American Party as the successor to the American Independent Party. In some places, such as Connecticut, the American Party was constituted as the American Conservative Party. (The modern American Conservative Party, founded in 2008, is unrelated to the Wallace-era party.) In March 1969, the party ran a candidate in a special election in Tennessee's 8th congressional district in northwestern Tennessee, where Wallace had done well the previous November, to replace Congressman Robert "Fats" Everett, who had died in office. Their candidate, William J. Davis, out-polled Republican Leonard Dunavant, with 16,375 votes to Dunavant's 15,773; but the race was carried by moderate Democrat Ed Jones, with 33,028 votes (47% of the vote).

The party flag, adopted on August 30, 1970, depicts an eagle holding a group of arrows in its left talons, over a compass rose, with a banner which reads "The American Independent Party" at the eagle's base.

The American Party ran occasional congressional and gubernatorial candidates, but few made any real impact. In 1970, the AIP fielded a candidate for governor of South Carolina, Alfred W. Bethea, a former Democratic member of the South Carolina House of Representatives from Dillon County. Democrat John C. West defeated the Republican nominee, Albert Watson, an outgoing member of the United States House of Representatives. Bethea finished with only 2 percent of the votes cast.[2]In another 1970 gubernatorial race, the Arkansas American Party ran Walter L. Carruth (1931-2008), a justice of the peace from Phillips County in eastern Arkansas, against Republican Winthrop Rockefeller and Democrat Dale Bumpers. Carruth received 36,132 votes (5.9 percent), not enough to affect the outcome in which Bumpers handily unseated Rockefeller.[3]

In 1972, the American Party nominated Republican Congressman John G. Schmitz of California for president and Tennessee author Thomas Jefferson Anderson for vice president (they received well over a million votes). In that election, Hall Lyons, an oilman from Lafayette, Louisiana, and a former Republican, ran as the AP U.S. Senate nominee but finished last in a four-way race dominated by the Democratic nominee, J. Bennett Johnston, Jr.

The American Independent Party has had ballot status in the state of California since 1968 and is still active there. As of early 2008, AIP's registration total was 328,261.[4] Many political analysts have theorized that the party, which has received very few votes in recent California elections, maintains its state ballot status because people join the Party mistakenly believing that they are registering as an "independent," also known as a "non-partisan" or "decline-to-state" voter.[5] One such voter was Jennifer Siebel, fiancée of San Francisco's liberal Democratic mayor Gavin Newsom; in 2008, Siebel attempted to change her party affiliation from Republican to Non-Partisan, but "checked the American Independent box thinking that was what independent voters were supposed to do," according to the San Francisco Chronicle.[6]

A split in the American Independent Party occurred during the 2008 presidential campaign, one faction recognizing Jim King as chairman of the AIP with the other recognizing Ed Noonan as chairman. Noonan's faction claims the old AIP main website while the King organization claims the AIP's blog. King's group met in Los Angeles on June 28–29, elected King to state chair.[7] Ed Noonan's faction, which included 8 of the 17 AIP officers, held a convention in Sacramento on July 5, 2008. Issues in the split were US foreign policy and the influence of Constitution Party founder Howard Phillips on the state party.[8]

The King group elected to stay in the Constitution Party and supported its presidential candidate, Chuck Baldwin. It was not listed as the "Qualified Political Party" by the California Secretary of State and Baldwin's name was not printed in the state's ballots.[9] King's group sued for ballot access [10] and their case was dismissed without prejudice.[11]

The Noonan group voted to pull out of the Constitution Party and join a new party called America's Party, put together by perennial candidate Alan Keyes as a vehicle for his own presidential campaign.[8] Since Noonan was on record with the California Secretary of State as (outgoing) party chairman, Keyes was added to the state ballots as the AIP candidate.[12] This group elected Markham Robinson as its new chair at the convention.

The King faction website is now billed as the Constitution Party of California, stating "Vote Constitution Party--the only party fighting for a return to Constitutional government!" Its blog provides a list of "2010 California Candidates: We endorse the following candidates who are running under the "American Independent" banner in California for 2010!"[13] 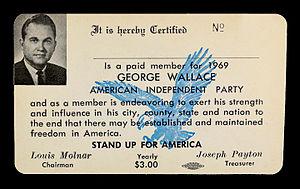 Since the fracture of the American Independent Party between the King and Noonan factions, control of the State Party, and thus the ballot line, has been in the hands of the Noonan faction. Attempts to nominate Chuck Baldwin (the 2008 Constitution nominee) or Virgil Goode (the 2012 Constitution nominee) were unsuccessful, as were their independent efforts to make it onto the California presidential ballot.