From Infogalactic: the planetary knowledge core
Jump to: navigation, search
Not to be confused with American patriotism.

The flag of the United States of America. 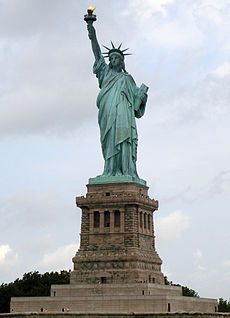 American nationalism is a form of nationalism found in the United States, which asserts that Americans are a nation and that promotes the cultural unity of Americans.[1]

American scholars such as Hans Kohn have claimed that the United States government institutionalized a civic nationalism based on legal and rational concepts of citizenship, and based on a common language and cultural traditions, rather than ethnic nationalism.[1] The founders of the United States founded the country upon classical liberal individualist principles rather than ethnic nationalist principles.[1] American nationalism since World War I and particularly since the 1960s has largely been based upon the civic nationalist culture of the country's founders.[2] However prior to 1914, American nationalism in practice had strong ethnic nationalist elements – including nativism and efforts to exclude immigrants, African Americans, and others from receiving political power as citizens.[1] American nativist ethnic nationalism found a basis in early leaders of the United States – such as George Washington who believed that immigration could have a deleterious effect on the country's national character, as well as John Adams and Thomas Jefferson who opposed immigration from absolute monarchies because they believed that such immigrants would bring the antidemocratic beliefs of their countries to the United States.[1] Discriminatory immigration policies by the U.S. government continued until 1965 with the Immigration and Nationality Act that abolished the existing ethnic quota system and replaced it with an ethnic-blind system.[3] The civil rights movement of the 1950s and 1960s resulted in American civic nationalism prevailing over ethnic nationalism, as legal barriers preventing African Americans from attaining full citizenship were removed, officially enfranchising African Americans as equal citizens as guaranteed by the U.S. Constitution.[3]

The United States traces its origins to some of the colonies founded by the Kingdom of England in northern America in the early 17th century. Each colony was independently governed and was under the authority of the British crown; a colonist had no duty to colonies other than their own. By 1732, the Kingdom of Great Britain had over 13 colonies established in British America, from Rupert's Land to the Province of Georgia. When the colonies faced a threat during the French and Indian War from 1754 to 1763, the Albany Plan proposed a union between the colonies in 1754. Although unsuccessful, it served as a reference for future discussions of independence.[4]

Soon after, the colonies faced several common grievances over acts passed by the British parliament, including taxation without representation. As the disputes escalated, some colonists started to view British rule as oppressive and hostile, and sought cooperation with other colonies in response. This cooperation led to the Continental Congress, which lasted from 1774 to 1789, the U.S. Declaration of Independence of 1776, the American Revolutionary War, which lasted from 1775 to 1783, and ultimately independence. Ties between the thirteen states strengthened with the ratification of the United States Constitution in 1788.

In an 1858 speech, future U.S. president Abraham Lincoln alluded to American civic nationalism, originating from the U.S. Declaration of Independence, as a force for national unity in the U.S., stating that it was a method for uniting people of different ancestries into a common nationality:

We have besides these men—descended by blood from our ancestors—among us perhaps half our people who are not descendants at all of these men, they are men who have come from Europe—German, Irish, French and Scandinavian—men that have come from Europe themselves, or whose ancestors have come hither and settled here, finding themselves our equals in all things. If they look back through this history to trace their connection with those days by blood, they find they have none, they cannot carry themselves back into that glorious epoch and make themselves feel that they are part of us, but when they look through that old Declaration of Independence they find that those old men say that 'We hold these truths to be self-evident, that all men are created equal,' and then they feel that that moral sentiment taught in that day evidences their relation to those men, that it is the father of all moral principle in them, and that they have a right to claim it as though they were blood of the blood, and flesh of the flesh of the men who wrote that Declaration, and so they are. That is the electric cord in that Declaration that links the hearts of patriotic and liberty-loving men together, that will link those patriotic hearts as long as the love of freedom exists in the minds of men throughout the world.

The American Civil War marked a significant transition in American national identity. The ratification of the Fourteenth and Fifteenth amendments settled the basic question of national identity, such as the criteria for becoming a citizen of the United States. Under these amendments, anyone born in the territorial boundaries of the United States or those areas subject to its jurisdiction was an American citizen, regardless of ethnicity or social status. However, Native Americans were not to gain citizenship under these amendments. In 1919, all Native Americans who had served in the U.S. military were granted full citizenship, but the remainder of Native Americans on reservations were not included as U.S. citizens until 1924, when the Indian Citizenship Act was passed by Congress.[6] Before the American Civil War, Americans would consider themselves loyal to a specific state. After the war, the people considered themselves American citizens.[citation needed][opinion]

Nationalism in the contemporary United States

Nationalism and Americanism remain topics in the modern United States. The Rutgers University professor Paul McCartney, for instance, argues that as a nation defined by a creed and sense of mission, Americans tend to equate their interests with those of humanity, which in turn informs their global posture.[7]

The September 11 attacks of 2001 led to a wave of nationalist expression in the United States. This was accompanied by a rise in military enlistment that included not only lower-income Americans, but also middle-class and upper-class citizens.[8]