From Infogalactic: the planetary knowledge core
Jump to: navigation, search
This article is about the Buddha. For other meanings, see Amitabha (disambiguation). 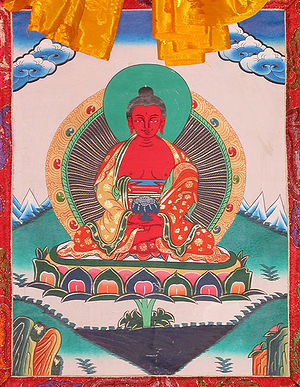 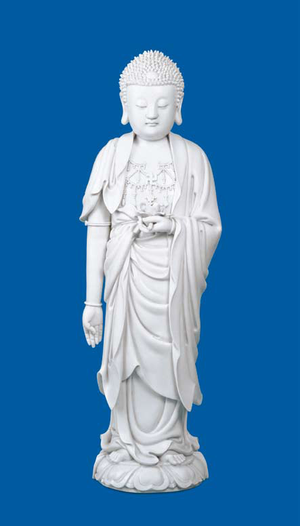 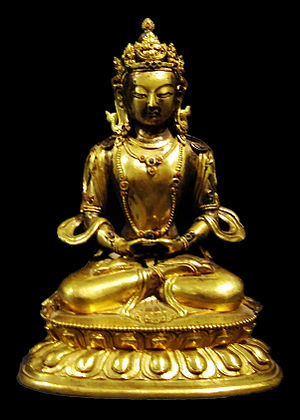 Amitābha[2] (Sanskrit pronunciation: [əmiˈt̪aːbʱə]), also Amida or Amitāyus, is a celestial buddha described in the scriptures of Mahāyāna Buddhism. Amitābha is the principal buddha in Pure Land Buddhism, a branch of East Asian Buddhism. In Vajrayana Buddhism, Amitābha is known for his longevity attribute, magnetising red fire element, the aggregate of discernment, pure perception and the deep awareness of emptiness of phenomena. According to these scriptures, Amitābha possesses infinite merits resulting from good deeds over countless past lives as a bodhisattva named Dharmakāra. "Amitābha" is translatable as "Infinite Light," hence Amitābha is also called "The Buddha of Immeasurable Life and Light".

According to the Larger Sūtra of Immeasurable Life, Amitābha was, in very ancient times and possibly in another system of worlds, a monk named Dharmakāra. In some versions of the sūtra, Dharmakāra is described as a former king who, having come into contact with Buddhist teachings through the buddha Lokeśvararāja, renounced his throne. He then resolved to become a buddha and so to come into possession of a buddhakṣetra ("buddha-field", a realm existing in the primordial universe outside of ordinary reality, produced by a buddha's merit) possessed of many perfections. These resolutions were expressed in his forty-eight vows, which set out the type of buddha-field Dharmakāra aspired to create, the conditions under which beings might be born into that world, and what kind of beings they would be when reborn there.

In the versions of the sutra widely known in China, Vietnam, Korea and Japan, Dharmakāra's eighteenth vow was that any being in any universe desiring to be born into Amitābha's pure land (Chinese: 净土; pinyin: jìngtŭ; Japanese pronunciation: jōdo; Korean: 정토; romaja: jeongto; Vietnamese: tịnh độ) and calling upon his name even as few as ten times will be guaranteed rebirth there. His nineteenth vow promises that he, together with his bodhisattvas and other blessed Buddhists, will appear before those who call upon him at the moment of death. This openness and acceptance of all kinds of people has made belief in pure lands one of the major influences in Mahāyāna Buddhism. Pure Land Buddhism seems to have first become popular in Gandhara, from where it spread to Central Asia and China.

The sutra goes on to explain that Amitābha, after accumulating great merit over countless lives, finally achieved buddhahood and is still residing in his land of Sukhāvatī, whose many virtues and joys are described.

The basic doctrines concerning Amitābha and his vows are found in three canonical Mahāyāna texts:[3]

Through his efforts, Amitābha created a pure land called Sukhāvatī (Sanskrit: "possessing happiness") . Sukhāvatī is situated in the uttermost west, beyond the bounds of our own world. By the power of his vows, Amitābha has made it possible for all who call upon him to be reborn into this land, there to undergo instruction by him in the dharma and ultimately become bodhisattvas and buddhas in their turn (the ultimate goal of Mahāyāna Buddhism). From there, these same bodhisattvas and buddhas return to our world to help yet more people.

Amitābha is the buddha of comprehensive love. He lives in the West (represented as a meditating Buddha) and works for the enlightenment of all beings (represented as a blessing Buddha). His most important enlightenment technique is the visualization of the surrounding world as a paradise. Who sees his world as a paradise, awakens his enlightenment energy. The world can be seen as a paradise by a corresponding positive thought (enlightenment thought) or by sending light to all beings (wish all beings to be happy). After the Amitabha doctrine, one can come to paradise (in the Pure Land of Amitābha), if they visualize at their death Amitābha in the heaven (sun) over their head (western horizon), think his name as a mantra and leave the body as a soul through the crown chakra. 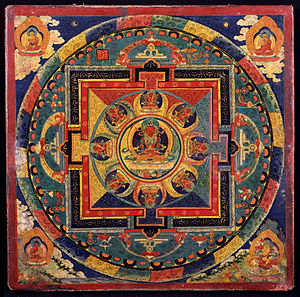 Amitābha is also known in Tibet, Mongolia, and other regions where Tibetan Buddhism is practiced. In the Highest Yoga Tantra class of the Tibetan Vajrayana Amitābha is considered one of the Five Dhyāni Buddhas (together with Akṣobhya, Amoghasiddhi, Ratnasambhava, and Vairocana), who is associated with the western direction and the skandha of saṃjñā, the aggregate of distinguishing (recognition) and the deep awareness of individualities. His consort is Pāṇḍaravāsinī.[4][5][6][7][8] His two main disciples (the same number as Gautama Buddha) are the bodhisattvas Vajrapani and Avalokiteśvara, the former to his left and the latter to his right. In Tibetan Buddhism, there exist a number of famous prayers for taking rebirth in Sukhāvatī (Dewachen). One of these was written by Je Tsongkhapa on the request of Manjushri; for a discussion and translation of the most important prayers in the Tibetan tradition see Halkias.[9]

The Panchen Lamas[10] and Shamarpas[11] are considered to be emanations of Amitābha.

In Shingon Buddhism, Amitābha is seen as one of the thirteen Buddhas to whom practitioners can pay homage. Shingon, like Tibetan Buddhism, also uses special devotional mantras for Amitābha, though the mantras used differ. Amitābha is also one of the Buddhas featured in the Womb Realm Mandala used in Shingon practices, and sits to the west, which is where the Pure Land of Amitābha is said to dwell.

Amitābha is the center of a number of mantras in Vajrayana practices. The Sanskrit form of the mantra of Amitābha is ॐ अमिताभ ह्रीः (Devanagari: oṃ amitābha hrīḥ), which is pronounced in its Tibetan version as Om ami dewa hri (Sanskrit: oṃ amideva hrīḥ). His mantra in Shingon Buddhism is On amirita teizei kara un which represents the underlying Indic form oṃ amṛta-teje hara hūṃ.

In addition to using the mantras listed above, many Buddhist schools invoke Amitābha's name in a practice known as nianfo 念佛 in Chinese and nembutsu in Japanese.

The proper form of Amitābha's name in Sanskrit is Amitābha, masculine, and the nominative singular is Amitābhaḥ. This is a compound of the Sanskrit words amita ("without bound, infinite") and ābhā ("light, splendor"). Consequently, the name is to be interpreted as "he who possesses light without bound, he whose splendor is infinite".

The name Amitāyus (nominative form Amitāyuḥ) is also used for the Sambhogakāya aspect of Amitabha, particularly associated with longevity.[12] He is mostly depicted sitting and holding in his hands a vessel containing the nectar of immortality. In Tibetan Buddhism, Amitayus is also one of the three deities of long life (Amitayus, White Tara and Uṣṇīṣavijayā) . Amitāyus being a compound of amita ("infinite") and āyus ("life"), and so means "he whose life is boundless".

In Chinese, 阿弥陀佛 ("Āmítuófó"), sometimes pronounced "Ēmítuófó", is the Chinese pronunciation for the Sanskrit name of the Amitābha Buddha (Amida Buddha). The "a mi tuo" is the transliteration of the Sanskrit word "Amida" which means "boundless" (无量, "wuliang"). "Fo" is the Chinese word for "Buddha".[13]

In Vietnamese, Korean, and Japanese, the same Chinese characters used for Amitabha are used to represent his name, though they are pronounced slightly differently:

In Japanese, he is also called Amida Nyorai (阿弥陀如来), meaning " the Tathāgata Amitābha". 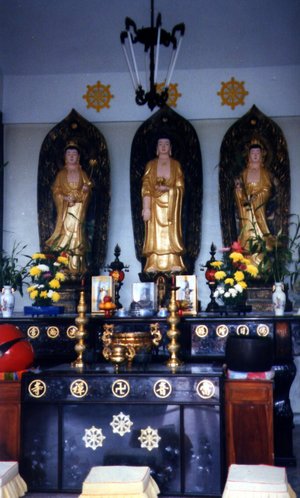 It can be difficult to distinguish Amitābha from Śākyamuni (and any buddhas in general) as both are portrayed as possessing all the attributes of a buddha but no distinguishing marks.[citation needed] Amitabha can, however, often be distinguished by his mudrā: Amitābha is often depicted, when shown seated, displaying the meditation mudrā (thumbs touching and fingers together (as in the Kamakura statue of Amitābha) or the exposition mudrā, while the earth-touching mudrā (right hand pointed downward over the right leg, palm inward) is reserved for a seated Śākyamuni alone. He can also be seen holding a lotus in his hands while displaying the meditation mudrā.

There is a difference between Amitayus and Amitabha. Amitayus—the Buddha of Infinite Life—and Amitabha—the Buddha of Infinite Light—are essentially identical, being reflective images of one another. Sutras in which Shakyamuni expounds the glories of Sukhavati, the Pure Lands, speak of the presiding Buddha sometimes as Amitabha and sometimes as Amitayus. When depicted as Amitayus he is depicted in fine clothes and jewels and as Amitabha in simple monk's clothing. They are also simply known as Amida in the Chinese and Japanese tradition. The image of the gold colored statue in the article is of Amitayus as he is wearing a five-pointed crown, which is the easiest way to distinguish them. Amitayus is an emanation of Amitabha. Amitabha is the head of the Lotus family, where as Amitayus is not the head of the Lotus Family.[14]

When standing, Amitābha is often shown with left arm bare and extended downward with thumb and forefinger touching, with the right hand facing outward also with thumb and forefinger touching. The meaning of this mudra is that wisdom (symbolized by the raised hand) is accessible to even the lowest beings, while the outstretched hand shows that Amitabha's compassion is directed at the lowest beings, who cannot save themselves.

When not depicted alone, Amitābha is often portrayed with two assistants: Avalokiteśvara on the right and Mahāsthāmaprāpta on the left.

In Vajrayana, Amitābha is the most ancient of among the Dhyani Buddhas. He is of red color originating from the red seed syllable hrīḥ. He represents the cosmic element of "Sanjana" (name). His vehicle is the peacock. He exhibits Samadhi Mudra his two palms folded face up, one on top of the other, lying on his lap. The lotus is his sign. When represented on the stupa, he always faces toward west. He is worshiped thinking that one can have salvation. 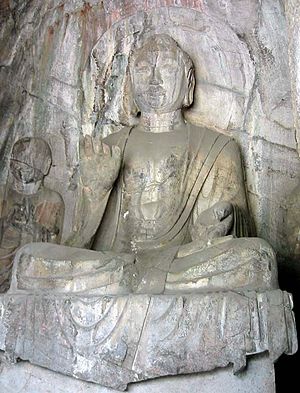 The first known epigraphic evidence for Amitābha is the bottom part of a statue found in Govindnagar, Pakistan and now located at Government Museum, Mathura. The statue is dated to "the 28th year of the reign of Huviṣka" i.e., sometime in the latter half of the second century during the Kushan Empire, and was apparently dedicated to "Amitābha Buddha" by a family of merchants.[15]

The first known sutra mentioning Amitābha is the translation into Chinese of the Pratyutpanna Samādhi Sūtra by the Kushan monk Lokakṣema around 180. This work is said to be at the origin of pure land practices in China.

The appearance of such literature and sculptural remains at the end of the second century suggests that the doctrine of Amitābha probably developed during the first and second centuries. Furthermore, there are sculptures of Amitabha in dhyani mudras as well as bronzes of Amitabha in abhaya mudra from the Gandhara era of the first century, suggesting the popularity of Amitabha during that time. One of the last prayer busts of Amitabha can be found in the trademark black stone of the Pala Empire, which was the last Buddhist empire of India and lost its influence in the twelfth century due to muslim conquests on the Indian subcontinent.