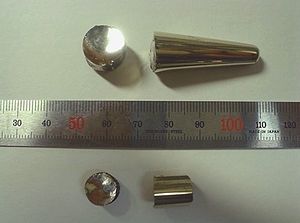 An amorphous metal (also known metallic glass or glassy metal) is a solid metallic material, usually an alloy, with a disordered atomic-scale structure. Most metals are crystalline in their solid state, which means they have a highly ordered arrangement of atoms. Amorphous metals are non-crystalline, and have a glass-like structure. But unlike common glasses, such as window glass, which are typically electrical insulators, amorphous metals have good electrical conductivity. There are several ways in which amorphous metals can be produced, including extremely rapid cooling, physical vapor deposition, solid-state reaction, ion irradiation, and mechanical alloying.[1][2]

In the past, small batches of amorphous metals have been produced through a variety of quick-cooling methods. For instance, amorphous metal ribbons have been produced by sputtering molten metal onto a spinning metal disk (melt spinning). The rapid cooling, on the order of millions of degrees a second, is too fast for crystals to form and the material is "locked" in a glassy state. More recently a number of alloys with critical cooling rates low enough to allow formation of amorphous structure in thick layers (over 1 millimeter) had been produced; these are known as bulk metallic glasses (BMG). Liquidmetal sells a number of titanium-based BMGs, developed in studies originally performed at Caltech. More recently, batches of amorphous steel have been produced that demonstrate strengths much greater than conventional steel alloys.

The first reported metallic glass was an alloy (Au75Si25) produced at Caltech by W. Klement (Jr.), Willens and Duwez in 1960.[3] This and other early glass-forming alloys had to be cooled extremely rapidly (on the order of one megakelvin per second, 106 K/s) to avoid crystallization. An important consequence of this was that metallic glasses could only be produced in a limited number of forms (typically ribbons, foils, or wires) in which one dimension was small so that heat could be extracted quickly enough to achieve the necessary cooling rate. As a result, metallic glass specimens (with a few exceptions) were limited to thicknesses of less than one hundred micrometers.

In 1976, H. Liebermann and C. Graham developed a new method of manufacturing thin ribbons of amorphous metal on a supercooled fast-spinning wheel.[4] This was an alloy of iron, nickel, phosphorus and boron. The material, known as Metglas, was commercialized in the early 1980s and is used for low-loss power distribution transformers (Amorphous metal transformer). Metglas-2605 is composed of 80% iron and 20% boron, has Curie temperature of 373 °C and a room temperature saturation magnetization of 1.56 teslas.[5]

In the early 1980s, glassy ingots with 5 mm diameter were produced from the alloy of 55% palladium, 22.5% lead, and 22.5% antimony, by surface etching followed with heating-cooling cycles. Using boron oxide flux, the achievable thickness was increased to a centimeter.[clarification needed]

In 1988, alloys of lanthanum, aluminium, and copper ore were found to be highly glass-forming. Al-based metallic glasses containing Scandium exhibited a record-type tensile mechanical strength of about 1500 MPa.[7]

In the 1990s new alloys were developed that form glasses at cooling rates as low as one kelvin per second. These cooling rates can be achieved by simple casting into metallic molds. These "bulk" amorphous alloys can be cast into parts of up to several centimeters in thickness (the maximum thickness depending on the alloy) while retaining an amorphous structure. The best glass-forming alloys are based on zirconium and palladium, but alloys based on iron, titanium, copper, magnesium, and other metals are also known. Many amorphous alloys are formed by exploiting a phenomenon called the "confusion" effect. Such alloys contain so many different elements (often four or more) that upon cooling at sufficiently fast rates, the constituent atoms simply cannot coordinate themselves into the equilibrium crystalline state before their mobility is stopped. In this way, the random disordered state of the atoms is "locked in".

In 2004, two groups succeeded in producing bulk amorphous steel (actually rather cast iron owing to high C content), one at Oak Ridge National Laboratory, the other at University of Virginia. The Oak Ridge group refers to their product as "glassy steel," while the University of Virginia group referred to theirs as "DARVA-Glass 101".[8][9] The product is non-magnetic at room temperature and significantly stronger than conventional steel, though a long research and development process remains before the introduction of the material into public or military use.[10][11]

Amorphous metal is usually an alloy rather than a pure metal. The alloys contain atoms of significantly different sizes, leading to low free volume (and therefore up to orders of magnitude higher viscosity than other metals and alloys) in molten state. The viscosity prevents the atoms moving enough to form an ordered lattice. The material structure also results in low shrinkage during cooling, and resistance to plastic deformation. The absence of grain boundaries, the weak spots of crystalline materials, leads to better resistance to wear[citation needed] and corrosion. Amorphous metals, while technically glasses, are also much tougher and less brittle than oxide glasses and ceramics.

To achieve formation of amorphous structure even during slower cooling, the alloy has to be made of three or more components, leading to complex crystal units with higher potential energy and lower chance of formation. The atomic radius of the components has to be significantly different (over 12%), to achieve high packing density and low free volume. The combination of components should have negative heat of mixing, inhibiting crystal nucleation and prolonging the time the molten metal stays in supercooled state.

The alloys of boron, silicon, phosphorus, and other glass formers with magnetic metals (iron, cobalt, nickel) have high magnetic susceptibility, with low coercivity and high electrical resistance. Usually the conductivity of a metallic glass is of the same low order of magnitude as of a molten metal just above the melting point. The high resistance leads to low losses by eddy currents when subjected to alternating magnetic fields, a property useful for e.g. transformer magnetic cores. Their low coercivity also contributes to low loss.

Amorphous metals have higher tensile yield strengths and higher elastic strain limits than polycrystalline metal alloys, but their ductilities and fatigue strengths are lower.[12] Amorphous alloys have a variety of potentially useful properties. In particular, they tend to be stronger than crystalline alloys of similar chemical composition, and they can sustain larger reversible ("elastic") deformations than crystalline alloys. Amorphous metals derive their strength directly from their non-crystalline structure, which does not have any of the defects (such as dislocations) that limit the strength of crystalline alloys. One modern amorphous metal, known as Vitreloy, has a tensile strength that is almost twice that of high-grade titanium. However, metallic glasses at room temperature are not ductile and tend to fail suddenly when loaded in tension, which limits the material applicability in reliability-critical applications, as the impending failure is not evident. Therefore, there is considerable interest in producing metal matrix composite materials consisting of a metallic glass matrix containing dendritic particles or fibers of a ductile crystalline metal.

Perhaps the most useful property of bulk amorphous alloys is that they are true glasses, which means that they soften and flow upon heating. This allows for easy processing, such as by injection molding, in much the same way as polymers. As a result, amorphous alloys have been commercialized for use in sports equipment, medical devices, and as cases for electronic equipment.[citation needed]

Currently the most important application is due to the special magnetic properties of some ferromagnetic metallic glasses. The low magnetization loss is used in high efficiency transformers (amorphous metal transformer) at line frequency and some higher frequency transformers. Amorphous steel is a very brittle material which makes it difficult to punch into motor laminations.[13] Also electronic article surveillance (such as theft control passive ID tags,) often uses metallic glasses because of these magnetic properties.

Amorphous metals (metallic glasses) exhibit unique softening behavior above their glass transition and this softening has been increasingly explored for thermoplastic forming of metallic glasses.[14] It has been shown that metallic glasses can be patterned on extremely small length scales ranging from 10 nm to several millimeters.[15] It has been suggested that this may solve the problems of nanoimprint lithography where expensive nano-molds made of silicon break easily. Nano-molds made from metallic glasses are easy to fabricate and more durable than silicon molds. Such low softening temperature allows for developing simple methods for making composites of nanoparticles (e.g. carbon nanotubes) and BMGs. The superior electronic, thermal and mechanical properties of BMGs compared to polymers make them a good option for developing nanocomposites for electronic application such as field electron emission devices.[16]

Ti40Cu36Pd14Zr10 is believed to be noncarcinogenic, is about three times stronger than titanium, and its elastic modulus nearly matches bones. It has a high wear resistance and does not produce abrasion powder. The alloy does not undergo shrinkage on solidification. A surface structure can be generated that is biologically attachable by surface modification using laser pulses, allowing better joining with bone.[17]

Mg60Zn35Ca5, rapidly cooled to achieve amorphous structure, is being investigated as a biomaterial for implantation into bones as screws, pins, or plates, to fix fractures. Unlike traditional steel or titanium, this material dissolves in organisms at a rate of roughly 1 millimeter per month and is replaced with bone tissue. This speed can be adjusted by varying the content of zinc.[18]

Bulk metallic glasses (BMGs) have now been modeled using atomic scale simulations (within the density functional theory framework) in a similar manner to high entropy alloys.[19][20] This has allowed predictions to be made about their behavior, stability and many more properties. As such, new BMG systems can be tested, and tailored systems; fit for a specific purpose (e.g. bone replacement or aero-engine component) without as much empirical searching of the phase space and experimental trial and error.