Amos Tappan Akerman (February 23, 1821 – December 21, 1880) served as United States Attorney General under President Ulysses S. Grant from 1870 to 1871. A native of New Hampshire, Akerman graduated from Dartmouth College in 1842. Upon graduation Akerman worked with young boys as Headmaster in North Carolina and as a tutor in Georgia. Having become interested in law Akerman studied and passed the bar in Georgia in 1850; where he and an associate practiced law. In a dual role as an attorney and a farmer making a living; Akerman owned eleven slaves. When the Civil War started in 1861, Akerman joined the Confederate Army and achieved the rank of Colonel.

After the Civil War ended in 1865, Akerman joined the Republican Party during Reconstruction and became an outspoken attorney advocate for African American civil rights in Georgia. Akerman, upon President Grant's appointment as his U.S. Attorney General, vigorously prosecuted the Klan in the South under the Enforcement Acts. Akerman was assisted by Sol. Gen. Benjamin Bristow in the newly established Department of Justice. Att. Gen. Akerman decided important land grant cases that concerned railroads in a rapidly expanding West. Akerman also ruled on the United States first federal Civil Service Reform law implemented by President Grant and the U.S. Congress. After he resigned office, Akerman continued in his thriving law practice in Georgia and was highly popular in the state.

Akerman was born on February 23, 1821, in Portsmouth, New Hampshire, as the ninth of Benjamin Akerman's twelve children.[1] He attended Phillips Exeter Academy high school, and then attended Dartmouth College located in Hanover, graduating as a member of the class of 1842 with Phi Beta Kappa honors.[1] 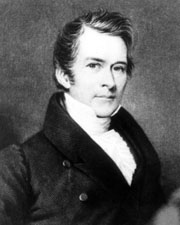 Upon graduation, a lung condition forced Akerman to move south. Akerman quickly got a job as a headmaster instructor of a boy's academy in Murfreesboro, North Carolina, at that time part of Richmond county.[1] Akerman was known as a strict teacher. In 1846, Akerman was hired as a tutor for John M. Berrien's, children in Savannah, Georgia.[1] Berrien had been President Andrew Jackson's Attorney General and was a prominent Whig.[2] Akerman took advantage of Berrien's extensive law library and became fascinated with the field.[1] Akerman passed the Georgia Bar in 1850, moved to Peoria, Illinois where his sister resided, and briefly practiced law.[2] Akerman returned to Georgia and practiced law in Clarksville.[1][2] Eventually, Akerman opened a law practice in Elberton, Georgia, with Robert Heston.[1] In addition to practicing law, Akerman also started a farm and owned eleven slaves.[2] In terms of politics Akerman was a Whig.[2]

Although he was against secession as a solution to the North–South conflicts, Akerman stayed loyal to his adopted state and joined the Confederate States Army in the spring of 1864. Akerman first served in General Robert Toombs' brigade and later in the quartermaster's department where it was his job to procure and dispense uniforms, weapons and other supplies to the soldiers. Akerman was put into active service against the Union during Sherman's 1864 march through Georgia.[3]

Akerman joined the Republican Party in the campaign for black-American citizenship and suffrage, and was an outspoken proponent of Reconstruction as a member of Georgia's 1868 state constitutional convention and as U.S. district attorney for Georgia (1869). Akerman was soon appointment as the federal district attorney of Georgia. His appointment was blocked for some time by Congress and Akerman was only able to serve in the position for a total period of six months.[3] Amos Akerman also strongly advocated Georgia's readmission into the Union and therefore fought for stability and federal compliance in the South.

During the 1868 Presidential election there was concern that Akerman supported presidential candidate Horatio Seymour over Grant.[4] To stop the rumor, in a letter from Elberton, Akerman published his full endorsement for Ulysses S. Grant and would serve as the Republican presidential state elector from Georgia.[4] Akerman believed Grant would restore order and peace to the violence-plagued South.[4] Akerman believed Grant would respect the "rights of the laborer as a freeman, citizen and voter".[4] Akerman wrote that violence in the South against blacks was motivated by revenge after being defeated by the North, slaves having been taken away, and were dissenfranchised politically.[4] Akerman believed that Congressional Reconstruction had been the better plan for the Southern states, opposed to President Andrew Johnson's Reconstruction plan.[4] Akerman believed that freedmen deserved federal protection from the law and that he endorsed their enfranchisement at the ballot.[4] Akerman admitted he was initially strongly opposed to blacks voting, however, his opinion changed as he viewed the only way blacks could gain protection was through suffrage.[4]

In 1869 President Grant appointed Akerman as U.S. Attorney in Georgia. President Grant, initially, attempted to protect African American voters by the use of State courts.

In June 1869, Akerman argued in defense of Richard W. White, a mulatto who had won the state election for Superior Court county clerk.[5] White's opponent, William James Clement, represented by Sol. Gen. Alfred B. Smith of the Eastern Georgia Circuit court, stated White was ineligible to hold office since White was a black man.[5] A lower court had ruled that if the Clement could prove White was a black man, he could not hold office.[6] The case went to the Georgia's Supreme Court where Akerman defended White's election and his color did not deny him the right to hold office.[6] Akerman argued that the old laws originating from slavery in the South did not apply anymore since the Reconstruction Act of 1867 stated that Georgia had no civilian government.[7] Akerman argued that since blacks had a right to vote in Georgia, that they had the right to hold public office.[7] Akerman argued that blacks had participated in the Georgia's new constitutional government in 1868 without distinction of color.[7] Akerman argued that both President Andrew Johnson and Ulysses S. Grant had appointed black men to public office and that the current U.S. Constitution did not recognize a person's color.[7] The Supreme Court reversed the lower courts decision and stated that White had the right to hold public office regardless of his race.[6] 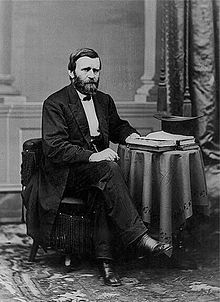 On June 23, 1870, he was appointed as Attorney General by President Ulysses S. Grant. Interestingly, Akerman was the "only person from the Confederacy to reach cabinet rank during Reconstruction". Having become attorney general shortly after the creation of the new Justice Department, Akerman dealt with legal issues from the Department of the Interior, such as the question of whether competing railroad companies deserved more land in the West in return for expanding the country's transportation system. He also dealt with the Crédit Mobilier of America scandal and led massive campaigns against the Ku Klux Klan (KKK), whose violence he had experienced first-hand. Akerman resigned in 1871 because of the beginning of corruption that plagued Grant's administration. His opposition to the Klan and nonpartisan interpretation of the United States Constitution, such as in the case of the railroad magnates, led advisors to pressure President Grant into asking for Akerman's resignation.

On September 7, 1871 Att. Gen. Akerman ruled on the newly formed Civil Service Commission passed by Congress on March 3, 1871 and signed into law by President Grant on March 4.[10] In the United States first ever Civil Service Reform legislation a commission was set up to establish rules, testing, and regulations, authorized by the President, for the best possible candidates to be appointed civil service positions.[10] The funding for the Commission only lasted for one year until June 30, 1872.[10] Akerman ruled that the Commission, run by a chairman appointed by the President, was legal, since Congress and the President had every right in their constitutional power to put in the best candidates to serve in the United States Government.[10] Akerman believed this was the original intent of the framers of the U.S. Constitution.[10] Akerman, however, ruled that the Commission did not constitutionally have the power to forbid an appointment; only to aid the President and Congress to put in the best person qualified for the job.[10] Akerman also ruled that the competitive testing need not be overly restrictive as to take away the appointment powers given to the President and Congress under the U.S. Constitution.[10]

Having lived in Georgia, Att. Gen. Akerman was well aware of the widespread violent tactics known as "outrages" of the Ku Klux Klan primarily against African American voters.[11] Upon his assumption to office, his primary duty was to stop the violence against blacks in the South and prosecute the perpetrators.[11] His appointment by Grant in November 1870 was well timed; having had the strong enforcement powers of the newly created U.S. Department of Justice and the assistance of the newly created office of the U.S. Solicitor General.[11] Having the Department of Justice and the first Sol. Gen. Benjamin Bristow, Att. Gen. Akerman was ready to federally prosecute the Klan.[11][12] Akerman, expanding the powers of the Department of Justice, started an investigating division that looked into the organization of the Klan in the South.[1] Akerman also had the legal authority to prosecute under the Ku Klux Klan Act, passed by Congress and signed into law by President Grant on April 20, 1871.[11] Akerman and Bristow acted quickly and efficiently.[12] After Grant had suspended habeas corpus in nine South Carolina counties on October 17, 1871 Akerman, who was in the state, personally led U.S. Marshals and the U.S. Army into the country side and made hundreds of arrests, while 2000 Klansmen fled the state.[11][12] With the assistance of Sol. Gen. Benjamin Bristow there were 3000 indictments of Klansmen throughout the South, and there were 600 convictions.[12] Sixty-five of the Klansmen convicted were put in federal prison for five years.[12] The result of Akerman and Bristows prosecutions and President Grant's willingness to enforce the law to stop the Klan, led to massive African American voting turnouts in 1872.[12]

During December, while Akerman was busy prosecuting the Klan he was unexpectedly asked to resign by President Grant.[9][13] Rumor was that Presidient Grant was pressured by Secretary of Interior Columbus Delano, who sympathized with Collis P. Huntington and Jay Gould, had demanded Akerman's resignation.[13] Akerman ruled against giving federal land grants and government bonds to the Union Pacific Railroad.[13] Akerman denied that Delano was the reason for his departure from office.[13] Grant, uneasy concerning Akerman's prosecution zeal against the Klan, did not want to appear as a military dictator grinding the South into submission.[13][14] Grant's replacement, George H. Williams, however, continued to prosecute the Klan in the South.[9] After Akerman resigned he did not have any hard feelings towards President Grant.[13] According to historian William S. McFeely, with Akerman's resignation "went any hope that the Republican party would develop as a national party of true racial equality".[13] Akerman supported Grant's renomination in 1872 and believed that Grant would continue to enforce anti-terrorist laws.[15]

Return to Georgia and death

Although he was offered another government job, he returned to Georgia, where he continued to practice law until his death in Cartersville, on December 21, 1880.

Days before he entered active Confederate Army service in 1864 during the Civil War, Akerman married Martha Rebecca Galloway. The couple had eight children; one child had died.[1] His son was Alexander Akerman.[1]