An amphidromic point is a point of zero amplitude of one harmonic constituent of the tide.[1] The tidal range (the amplitude, or height difference between high tide and low tide) for that harmonic constituent increases with distance from this point.[2] These points are sometimes called tidal nodes.

The term amphidromic point derives from the Greek words amphi (around) and dromos (running), referring to the rotary tides running around them.[3] 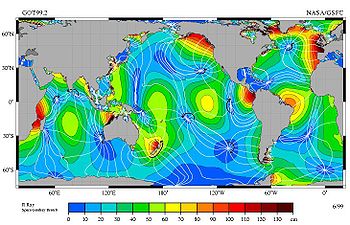 The M2 tidal constituent, the amplitude indicated by color. The white lines are cotidal lines spaced at phase intervals of 30° (a bit over 1 hr).[4] The amphidromic points are the dark blue areas where the lines come together. 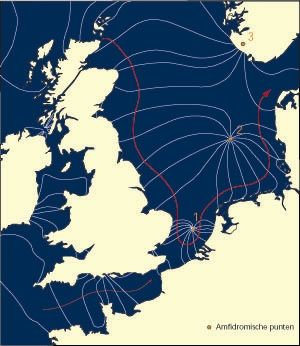 Amphidromic system of the M2 constituent in the North Sea. The light-blue lines are lines of equal tidal phase for the vertical tide (surface elevation) along such a line, and the amphidromic points are denoted by 1, 2 and 3.

In most locations M2 is the largest (semidiurnal) tidal constituent, with an amplitude of roughly half of the full tidal range. Having cotidal points means they reach high tide at the same time and low tide at the same time. In the accompanying figure, the low tide lags or leads by 1 hr 2 min from its neighboring lines. Where the lines meet are amphidromes, and the tide rotates around them; for example, along the Chilean coast, and from southern Mexico to Peru, the tide propagates southward, while from Baja California to Alaska the tide propagates northward.

Based on the accompanying figure, the set of clockwise amphidromic points includes:

The islands of Madagascar and New Zealand are amphidromic points in the sense that the tide goes around them (counterclockwise in both cases) in about 12 and a half hours, but the amplitude of the tides on their coasts is in some places large.