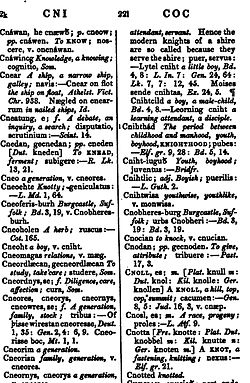 A page from the 1838 edition of Bosworth's Dictionary

An Anglo-Saxon Dictionary is a dictionary of Old English, a language that is also known as Anglo-Saxon. Four editions of the dictionary were published. It has often (especially in earlier times) been considered the definitive lexicon for Old English. A more comprehensive and exhaustive dictionary appeared over many years, beginning in 1970: this was the Toronto Dictionary of Old English, founding editors Angus Cameron and Christopher Ball. It is often referred to by the names of its compilers, for example Bosworth or Bosworth & Toller.

While being attributed to "J. Bosworth & T. N. Toller", this was a revision by Thomas Northcote Toller, based on Bosworth's 1838 dictionary, Bosworth's papers, and additions by Toller.

Alistair Campbell issued an edition with "enlarged addenda and corrigenda" in 1972.