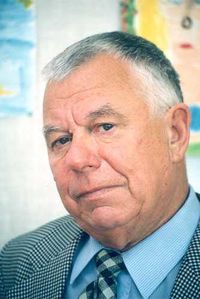 His mother died when he was nine and his father died in World War II, leaving Anatoly orphan. After spending several years in Soviet orphanages, Anatoly Pristavkin had to start working from the age of 14 onwards, and had various jobs. He started a career as a writer in 1961 and later became a lecturer at a university. Pristavkin became famous in the USSR for his novel «Ночевала тучка золотая…» translated into English as "The Inseparable Twins", which describes the miserable conditions of orphans' life in an orphanage near Moscow during the years of World War II and the re-settlement to Chechnya in 1944, as Chechens had been deported. The book became part of school curriculum in the Perestroika-era USSR. Books by Pristavkin were translated to many languages.

Pristavkin took part in Soviet opposition movement. In 1988 Pristavkin joined the writers association Aprel' («Апрель»), a pro-Perestroika organization of Russian writers. On 4 November 1989 he took part in the Alexanderplatz demonstration in East Berlin against the regime in East Germany. In 1991 he supported Latvian independence movement, stood at barricades in Riga and appealed to Soviet soldiers via regional television, urging them not to shoot at civilians. In 1995 and 1996 he visited Chechnya and encountered assaults on civilian population and later criticised Russia's Chechnya policies in media.

In 1990s, Anatoly Pristavkin headed the Pardon Commission of the Russian Federation. In 1993, he signed the Letter of Forty-Two.[1]