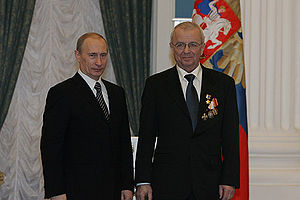 Anatoly Mikhailovich Sagalevich (Russian: Анатолий Михайлович Сагалевич) (born September 5, 1938[1]) is a Russian explorer, who works at the Shirshov Institute of Oceanology of the Russian Academy of Sciences (USSR Academy of Sciences until 1991) since 1965.

Since 1979 he has been the director of the Russian (former Soviet) Deepwater Submersibles Laboratory. He received Doctor of Sciences degree in 1985. Sagalevich took part in the construction of Pisces VIII, Pisces IX and MIR Deep Submergence Vehicles (DSV) and completed more than 300 submersions as the chief pilot of DSVs. Between 1989 and 2005 he led 28 expeditions on MIR DSV. He was the pilot of MIR during expeditions to RMS Titanic, Bismarck, Soviet submarine K-278 Komsomolets, I-52,[2] Russian submarine K-141 Kursk.

On August 2, 2007 Sagalevich was the pilot of MIR-1 DSV, that reached the seabed at the North Pole during Arktika 2007 expedition.

On January 10, 2008 Anatoly Sagalevich was awarded the title Hero of the Russian Federation for "courage and heroism showed in extremal conditions and successful completion of High-Latitude Arctic Deep-Water Expedition." [4]