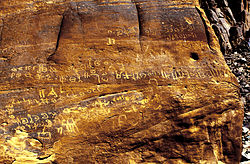 Ancient North Arabian is any of a number of extinct languages and dialects known from fragmentary inscriptions in modern-day Iraq, Jordan, Syria and Saudi Arabia, dating to between roughly the 8th century BC and the 6th century AD, all written in scripts derived from Epigraphic South Arabian. Pre-classical Arabic (or Old Arabic), the predecessor of Classical Arabic, seems to have coexisted with these languages in central and north Arabia.[2] However, Arabic remained exclusively a spoken language until it was first attested in an inscription in Qaryat al-Faw (formerly Qaryat Dhat Kahil, near Sulayyil, Saudi Arabia) in the 1st century BC.[2][3]

It is provisionally considered an Ancient North Arabian dialect but unlike the others it used the Ancient South Arabian alphabet with minor adaptations.

Taymanitic had twenty-six or twenty-seven letters while the other alphabets generally used twenty-eight letters. All the letters represent consonants. Vowels were not indicated although some Dadanitic texts make limited use of matres lectionis to mark long vowels.

The Ancient North Arabian alphabets were added to the Unicode Standard in June, 2014 with the release of version 7.0.

Note that U+10A9D OLD NORTH ARABIAN NUMBER ONE (𐪝) represents both the numeral one and a word divider.[8]