The Andalusian varieties of Spanish (Spanish: andaluz [andaˈluθ, -ˈlus]; Andalusian: [ãndaˈluʰ, -ˈlʊ]). are spoken in Andalusia, Ceuta, Melilla, and Gibraltar. They include perhaps the most distinct of the southern variants of peninsular Spanish, differing in many respects from northern varieties, and also from Standard Spanish. Due to the large population of Andalusia, the Andalusian dialect is the second most spoken dialect in Spain, after the transitional variants between Castilian and Andalusian (for example the one from Madrid).

Due to massive emigration from Andalusia to the Spanish colonies in the Americas and elsewhere, most American Spanish dialects share some fundamental characteristics with Western Andalusian Spanish, such as the use of ustedes instead of vosotros for the second person plural, and seseo. Many varieties of Spanish, such as Canarian Spanish, Caribbean Spanish and other Latin American Spanish dialects, including their standard dialects, are considered by most to be based on Andalusian Spanish. 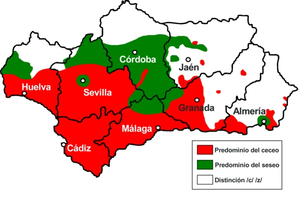 Areas of Andalusia in which seseo (green), ceceo (red), or the distinction of c/z and s (white) predominate

In still other areas, the distinction is retained (distinción /distinˈθjon/). Ceceo predominates in more southerly parts of Andalusia, including the provinces of Cádiz, southern Huelva, most of Málaga and Seville (except the northern parts of both provinces and the city of Seville) and south-western Granada. A common stereotype about ceceo is that it is mostly found in backward rural areas, but the predominance of ceceo in major cities such as Málaga, Huelva and Granada (where, on the other hand one can also find distinción, depending on the neighbourhood) are enough proof to refute this.

Seseo predominates in Córdoba, northern Seville and Málaga and western Huelva. Interestingly, the cities of Seville and Cádiz are seseante, but entirely surrounded by ceceo areas; the city of Cádiz is the only area in the entire province of Cádiz, along with San Fernando (La Isla de León), that is not ceceante. Distinción is mostly found in the provinces of Almería, eastern Granada, Jaén, and the northern parts of Córdoba and Huelva. See map above for a detailed description of these zones. Outside Andalusia, seseo also existed in parts of Extremadura and Murcia up to at least 1940. The standard distinction which predominates in Eastern Andalusia is now to be heard in many cultivated speakers of the West, especially among younger speakers in urban areas or in monitored speech. The influence of media and school is now strong in Andalusia and this is eroding traditional seseo and ceceo.

As a result, these varieties have five vowel phonemes, each with a tense allophone (roughly the same as the normal realization in northern Spanish; [a], [e̞], [i], [o̞], [u]) and a lax allophone ([æ̞], [ɛ], [i̞], [ɔ], [u̞]). In addition to this, a process of vowel harmony may take place where tense vowels that precede a lax vowel may become lax themselves; e.g. trébol [ˈtɾe̞βo̞l] ('clover, club') vs tréboles [ˈtɾɛβɔlɛ] ('clovers, clubs').[1] S-aspiration is general in all of the southern half of Spain, and now becoming common in the northern half too.[citation needed]

Many Western Andalusian speakers replace the informal second person plural vosotros with the formal ustedes (without the formal connotation, as happens in other parts of Spain). For example, the standard second person plural verb forms for ir ('to go') are vosotros vais (informal) and ustedes van (formal), but in Western Andalusian one often hears ustedes vais for the informal version.

Although mass media have generalised the use of le as a pronoun for the substitution of direct objects, many Andalusians still use the normative lo, as in lo quiero mucho (instead of le quiero mucho). Laísmo (the substitution of indirect pronoun le with la, as in the incorrect sentence *la pegó una bofetada) does not exist. Though not correct, it is frequently heard on Radio and TV programmes.

The standard form of imperative, second person plural with a reflexive pronoun (vosotros) is -aos, or -aros in informal speech, whereas in Andalusian, and other dialects, too, -se is used instead, so ¡callaos ya! / ¡callaros ya! ('shut up!') becomes ¡callarse ya! and ¡sentaos! / ¡sentaros! ('sit down!') becomes ¡sentarse!.

The gender of some words may not match that of Standard Spanish, e.g. la calor not el calor ('the heat'), el chinche not la chinche ('the bedbug'). La mar is also more frequently used than el mar. La mar de and tela de are lexicalised expressions to mean a lot of....

Many words of Mozarabic, Romani and Old Castilian origin occur in Andalusian which are not found in other dialects in Spain (but many of these may occur in South American and, especially, in Caribbean Spanish dialects due to the greater influence of Andalusian there). For example: chispenear instead of standard lloviznar or chispear ('to drizzle'), babucha instead of zapatilla ('slipper'), chavea or antié for anteayer ('the day before yesterday'). A few words of Andalusi Arabic origin that have become archaisms or unknown in general Spanish can be found, together with multitude of sayings: e.g. haciendo morisquetas (from the word morisco, meaning pulling faces and gesticulating, historically associated with Muslim prayers). These can be found in older texts of Andalusi. There are some doublets of Arabic-Latinate synonyms with the Arabic form being more common in Andalusian like Andalusian alcoba for standard habitación or dormitorio ('bedroom') or alhaja for standard joya ('jewel').

Some words pronounced in the Andalusian way have entered general Spanish with a specific meaning. One examples is juerga,[2] ("debauchery", or "partying") the Andalusian pronunciation of huelga[3] (originally "period without work", now "work strike"). The Flamenco lexicon incorporates many Andalusisms, for example, cantaor, tocaor, and bailaor, which are examples of the dropped "d"; in standard spelling these would be cantador, tocador, and bailador, while the same terms in more general Spanish may be cantante, músico, and bailarín. Note that, when referring to the Flamenco terms, the correct spelling drops the "d"; a Flamenco cantaor is written this way, not cantador. In other cases, the dropped "d" may be used in standard Spanish for terms closely associated with Andalusian culture. For example, pescaíto frito ("little fried fish") is a popular dish in Andalusia, and this spelling is used in many parts of Spain when referring to this dish. For general usage, the spelling would be pescadito frito.

Llanito, the vernacular of the British overseas territory of Gibraltar, mainly originates from British English and Andalusian, among others.