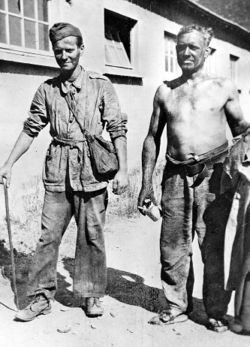 Anders' Army was the informal yet common name of the Polish Armed Forces in the East in the period 1941–42, in recognition of its commander Władysław Anders. The army was created in the Soviet Union but in March 1942 the army evacuated the Soviet Union and made its way through Iran to Palestine. There it passed under British command and provided the bulk of the units and troops of the Polish II Corps of the Polish Armed Forces in the West, which took part in fighting in the Italian Campaign.

After the Soviet invasion of Poland in 1939 the Soviets effectively broke off diplomatic relations when they withdrew recognition of the Polish government at the start of the invasion.[1] Up to 1.5 million Polish citizens, including over 200,000 Polish prisoners of war, were deported from Soviet-occupied Poland by the NKVD to the Gulags. Polish-Soviet diplomatic relations were re-established in 1941 after the German invasion of the Soviet Union forced Joseph Stalin to look for allies. Thus the military agreement from August 14 and subsequent Sikorski-Mayski Agreement from August 17, 1941, resulted in Stalin agreeing to declare all previous pacts he had with Nazi Germany null and void, invalidate the September 1939 Soviet-German partition of Poland and release tens of thousands of Polish prisoners-of-war held in Soviet camps. Pursuant to an agreement between the Polish government-in-exile and Stalin, the Soviets granted "amnesty" to many Polish citizens, from whom a military force was formed. Stalin also agreed that this military force would be subordinate to the Polish government-in-exile. A Polish Army on Soviet soil was born.

On August 4 the Polish military leader, General Władysław Sikorski, nominated General Władysław Anders, who had been just released from the Lubyanka prison in Moscow, as leader of the army. Meanwhile, another commander, General Michał Tokarzewski, had already begun the task of forming the army in the Soviet town of Totskoye on August 17. Anders issued his first orders and announced his appointment as commander on August 22.

The formation began organizing in the Buzuluk area, and recruitment began in the NKVD camps for Polish POWs. By the end of 1941 25,000 soldiers (including 1,000 officers) were recruited, forming three infantry divisions: 5th, 6th and 7th. Later Prime Minister of Israel, Nobel peace prize winner and leader of the anti-British resistance group Irgun Menachem Begin was among those who joined. In the spring of 1942 the organizing formation was moved to the area of Tashkent, and the 8th was also formed. 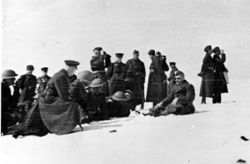 Officers of Polish and Red Armies during exercises in winter of 1941. Władysław Anders is sitting on the right.

The recruitment process met several obstacles, particularly the case of significant numbers of missing Polish officers (a result of the Katyn massacre), the dispute with the Soviets over whether non-ethnic Poles and citizens of the Second Polish Republic (Jews, Belarusians, Ukrainians) were eligible for recruitment, the Soviets assigning low priorities to the logistics of this project and their refusal to allow volunteers to leave USSR and join already existing and fighting Polish Armed Forces in the West. Another problem was that some administrators of Soviet labour camps and Gulag officials were not too willing to release the Poles as they required the slave labour to meet their own production quotas.[citation needed]

On March 18, 1942, due to the Soviet authorities inability to provide adequate rations for the growing Polish Army, which was even then sharing its limited food with an also growing group of Polish civilians,[2] Stalin agreed to evacuate part of the Polish formation as a military force to Iran after the Anglo-Soviet invasion of Iran; and the unit was transferred across the Caspian Sea to the port of Pahlavi (known today as Bandar-e Anzali), Iran. 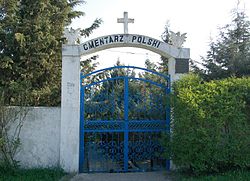 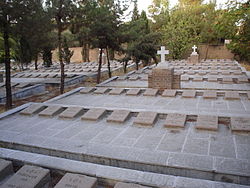 After the March–April arrival in Iran of the first evacuation wave, more military and civilian men, women and children were transferred later that summer, to the end of August, again by ship and by the overland route from Ashkhabad, Turkmenistan (then part of the USSR) to the railhead in Mashhad, Iran. As such, the unit passed from the Soviet control to that of the British government, and as the Polish Second Corps joined the Polish Armed Forces in the West. About 41 000 combatants and 74 000 civilians – Polish citizens – were able to leave the USSR with Anders' Army, joining the British High Command in the Middle East, traveling through Iran, Iraq and Palestine. Even though Stalin released many Polish prisoners from the Gulags, he did not transport them to British hands in Iran. Thousands of Polish prisoners were forced to walk from the southern border of the USSR, which is now Turkmenistan, to British hands in Iran. Many prisoners died from the long walk due to the cold weather conditions, hunger, and lack of physical ability to continue the journey. Troops from Anders's army fought at Tobruk (North Africa) and at Monte Cassino (Italy). This is commemorated today in Poland in streets and squares etc. given these names - for example there is a street named after Monte Cassino in most Polish cities.

When Anders' Army reached Palestine about 4,000 Jewish Polish soldiers left the army. While some deserted, others, including Menachem Begin, obtained permission from Anders to depart their formations. Both groups joined the veteran settlements in the region. Despite calls from British authorities, the Polish army had not pursued Jewish deserters. 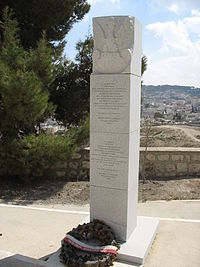 The memorial in Jerusalem.

The Polish Jews in Anders' Army had additional goals besides fighting the Nazis. When Anders' Army left the Soviet Union on its journey towards the Middle East, families of the soldiers and groups of Jewish children, war orphans, joined the Jewish soldiers. After arriving in Tehran, Iran, the children were transferred into the hands of the emissaries who brought them to Palestine. 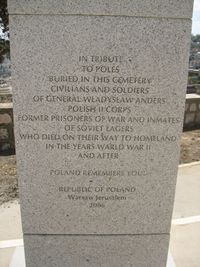 The English inscription on the memorial.

In the year 2006, a memorial to Anders' Army was erected in the orthodox cemetery on Mount Zion in Jerusalem.[citation needed]