Amalrik was best known in the Western world for his essay, Will the Soviet Union Survive Until 1984?

Amalrik was born in Moscow, during the time of Joseph Stalin's purges.

When the Soviet revolution broke out, Andrei's father, then a young man, volunteered for the Red Army. After the war he went into the film industry. Andrei's father fought in World War II in the Northern Fleet. He was overheard uttering negative views about Stalin's qualities as a military leader, which led to his arrest and imprisonment; he feared for his life, but shortly afterward was released to rejoin the army. In 1942 he was wounded at Stalingrad and invalided out of the service. Andrei's father's hardships explain Andrei's decision to become a historian. For his father, after climbing the educational ladder, was after the war refused permission to study at the Academy of Sciences' Institute of History on account of what authorities felt was his own compromised political past.[citation needed] But as Historian John Keep wrote: "Andrei has gone one better by not only writing history but by securing a place in it."[1][2]

Andrei's father developed a serious heart condition which required constant nursing. This care was provided first by his wife, and on her death from cancer in 1959 by his son Andrei, until Andrei's arrest prevented him from ministering to his father's needs. He died when Andrei was in prison.[2]

In high school, Andrei Amalrik was a restless student and truant. He was expelled a year before graduation. Despite this, he won admission to the history department at Moscow State University in 1959.[1]

In 1963, he angered the university with a dissertation suggesting that Scandinavian warrior-traders and Greeks, rather than Slavs, played the principal role in developing the early Russian state in the ninth century. Amalrik refused to modify his views and was expelled from Moscow University.[1][2][3]

Without a degree, Amalrik did odd jobs and wrote five unpublished plays but was soon under the gaze of the security police for an attempt to contact a Danish scholar through the Danish Embassy.[1] These plays and an interest in modern non-representational art led to Amalrik's first arrest in May 1965. A charge of spreading pornography failed because the expert witnesses called by the prosecution refused to give the correct testimony. However, the authorities then accused Amalrik of "parasitism," and he was sentenced by an administrative tribunal to banishment in western Siberia for a two-and-a-half-year term.[2]

He was freed briefly and then rearrested and sent to exile in a farm village near Tomsk, in Siberia. Allowed to make a brief trip to Moscow after the death of his father, Amalrik persuaded Tatar expressionist artist, Gyuzel Makudinova, to marry him and share his exile.[1][4]

It was this exile he described in Involuntary Journey to Siberia (1970). Thanks to the efforts of his lawyer, his sentence was overturned in 1966 and Amalrik returned to Moscow, moving with Gyuzel into a crowded communal apartment with one bath, one kitchen, and one telephone.[1][2]

During the trial of writers Andrei Sinyavsky and Yuli Daniel in February 1966, Amalrik and other dissenters stood outside of the trial to protest.[5]

Amalrik often met with foreign correspondents to relay protests, took part in vigils outside courthouses and even gave an interview to an American television reporter.[1]

After the invasion of Czechoslovakia in 1968, pressure on Russia's intellectuals was stepped up by the authorities. Amalrik's apartment was twice searched, in May 1969 and February 1970.[2]

Will the Soviet Union Survive Until 1984?

Amalrik was best known in the Western world for his essay Will the Soviet Union Survive Until 1984?, published in 1970. The book predicts the country's eventual breakup under the weight of social and ethnic antagonisms and a disastrous war with China.

Writing in 1969, Amalrik originally wanted to make 1980 as the date of the Soviet downfall, because 1980 was a round number, but Amalrik was persuaded by a friend to change it to the Orwellian inspired year of 1984.[6] Amalrik predicted the collapse of the regime would occur between 1980 and 1985.[7]

Amalrik said in his book:

I must emphasize that my essay is based not on scholarly research but only on observation. From an academic point of view, it may appear to be only empty chatter. But for Western students of the Soviet Union, at any rate, this discussion should have the same interest that a fish would have for an ichthyologist if it suddenly began to talk.[8]

Amalrik was incorrect in some of his predictions, such as a coming military collision with China, and the collapse of the Soviet Union occurred in 1991, not 1984. He also failed to predict that he himself would not survive 1980.[6] Correct was his argument that:

If...one views the present "liberalization" as the growing decrepitude of the regime rather than its regeneration, then the logical result will be its death, which will be followed by anarchy."[8]

Amalrik predicted that when the breakup of the Soviet empire came, it would take one of two forms. Either power would pass to extremist elements and the country would "disintegrate into anarchy, violence, and intense national hatred," or the end would come peacefully and lead to a federation like the British Commonwealth or the European Common Market.[9]

As 1984 drew nearer, Amalrik revised the timetable but still predicted that the Soviet Union would eventually collapse.[3]

Predictions of the Soviet Union's impending demise were discounted by many, if not most, Western academic specialists,[10] and had little impact on mainstream Sovietology.[11] "Amalrik's essay was welcomed as a piece of brilliant literature in the West" but "[v]irtually no one tended to take it at face value as a piece of political prediction."[6]

Soviet dissident Natan Sharansky described that "in 1984 KGB officials, on coming to me in prison" when Amalrik's essay was mentioned, "laughed at this prediction. 'Amalrik is long dead', they said, 'but we are still very much present.'"[12]

Of those few who foresaw the fall of the Soviet Union, including Andrei Amalrik, author Walter Laqueur argued in 1995 that they were largely accidental prophets, possessors of both brilliant insight into the regime's weaknesses and even more brilliant luck.[13]

For several months after the publication of Will the Soviet Union Survive Until 1984? (1970) and Involuntary Journey to Siberia (August 1970), abroad, a criminal offense under Soviet law, Amalrik remained free to walk the streets of Moscow and to associate with foreigners.

Inevitably, for "defaming the Soviet state", Amalrik was arrested in November 1970[2] and sentenced to three years in a labor camp in Kolyma. At the end of his term, he was given three more years, but because of his poor health (he almost died of meningitis) and protests from the West, the sentence was commuted after one year to exile in the same region. After serving a five-year term, he returned to Moscow in 1975. Although they were not Jewish, the authorities tried to persuade Amalrik and his wife to apply for visas to Israel, the common channel for emigration from the Soviet Union; they refused. On September 13, 1975, Amalrik was arrested again. The police captain told his wife that he was arrested for not having permission to live in Moscow; he could have faced a fine or up to 1 year in prison for violating Soviet passport regulations.[1][3][14]

In the early 1976 Amalrik and other dissidents conceived idea of the Moscow Helsinki Group; it was formed in May 1976. 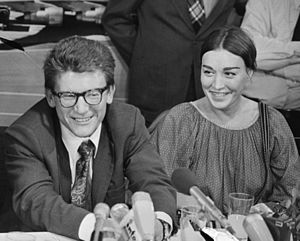 The KGB gave Amalrik an ultimatum: to emigrate or face another sentence. In 1976 his family got visas to go to the Netherlands. He made a farewell tour of Russia before emigrating.[1][3]

Amalrik worked in the Netherlands at the Utrecht University, then moved to the United States to study and lecture. Later, he and Gyuzel bought a villa in France, near the Swiss border, where he worked on his book, Notebooks of a Revolutionary.[1]

On November 12, 1980, Amalrik, his wife, and two other Soviet exiles, Vladimir Borisov and Viktor Fainberg, were on their way to Madrid to attend an East-West conference called to review the Helsinki Accords of 1975. "Spanish police stated that Amalrik, coming from southern France, swerved out of his lane on a wet road near the city of Guadalajara and his car struck an oncoming truck. Mr. Amalrik was instantly killed by a piece of metal, probably from the steering column, which was embedded in his throat, according to the police. His widow, Gyuzel, received only slight injuries," as did the two other passengers.[1][3]

Quotes from Will the Soviet Union Survive Until 1984?

Quote from "Notes of a Revolutionary"