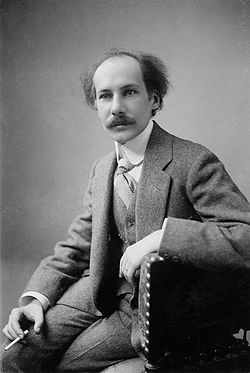 Boris Bugaev was born in Moscow, into a prominent intellectual family. His father, Nikolai Bugaev, was a leading mathematician who is regarded as a founder of the Moscow school of mathematics. His mother was not only highly intelligent but a famous society beauty, and the focus of considerable gossip. Young Boris was a polymath whose interests included mathematics, music, philosophy, and literature. He would go on to take part in both the Symbolist movement and the Russian school of neo-Kantianism.

Nikolai Bugaev was well known for his influential philosophical essays, in which he decried geometry and probability and trumpeted the virtues of hard analysis. Despite—or because of—his father's mathematical tastes, Boris Bugaev was fascinated by probability and particularly by entropy, a notion to which he frequently refers in works such as Kotik Letaev.[citation needed]

As a young man, Bely was strongly influenced by his acquaintance with the family of philosopher Vladimir Solovyov, especially Vladimir's younger brother Mikhail, described in his long autobiographical poem The First Encounter (1921); the title is a reflection of Vladimir Solovyov's Three Encounters. 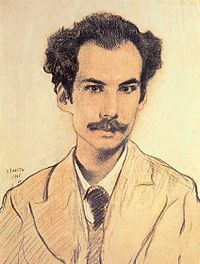 Bely's symbolist novel Petersburg (1916; 1922) is generally considered to be his masterpiece. The book employs a striking prose method in which sounds often evoke colors. The novel is set in the somewhat hysterical atmosphere of turn-of-the-century Petersburg and the Russian Revolution of 1905. To the extent that the book can be said to possess a plot, this can be summarized as the story of the hapless Nikolai Apollonovich, a ne'er-do-well who is caught up in revolutionary politics and assigned the task of assassinating a certain government official—his own father. At one point, Nikolai is pursued through the Petersburg mists by the ringing hooves of the famous bronze statue of Peter the Great.[citation needed]

In his later years Bely was influenced by Rudolf Steiner’s anthroposophy[3][4] and became a personal friend of Steiner's. He spent time between Switzerland, Germany, and Russia, during its revolution. He supported the Bolshevik rise to power and later dedicated his efforts to Soviet culture, serving on the Organizational Committee of the Union of Soviet Writers.[5] He died, aged 53, in Moscow.

Bely was one of the major influences on the theater of Vsevolod Meyerhold.[citation needed]

The Andrei Bely Prize (Russian: Премия Андрея Белого), one of the most important prizes in Russian literature, was named after him. His poems were set on music and frequently performed by Russian singer-songwriters[6]

Research on rhythm in poems

Bely's essay Rhythm as Dialectic in The Bronze Horseman is cited in Nabokov's novel The Gift, where it is mentioned as "monumental research on rhythm".[7] Fyodor, poet and main character, praises the system Bely created for graphically marking off and calculating the 'half-stresses' in the iambs. Bely found that the diagrams plotted over the compositions of the great poets frequently had the shapes of rectangles and trapeziums. Fyodor, after discovering Bely's work, re-read all his old iambic tetrameters from the new point of view, and was terribly pained to find out that the diagrams for his poems were instead plain and gappy.[7] Nabokov's essay Notes on Prosody follows for the large part Bely's essay Description of the Russian iambic tetrameter (published in the collection of essays Symbolism, Moscow, 1910).

In the Kingdom of Shadows