Card announced his resignation as Chief of Staff on March 28, 2006, effective April 14, 2006. Card was temporarily the Acting Dean of The Bush School of Government and Public Service, at Texas A&M University, while Ryan Crocker fulfilled his U.S. Ambassador to Afghanistan responsibilities before stepping down in July 2012.

He is currently the President of Franklin Pierce University in Rindge, New Hampshire.

Card was born on May 10, 1947 in Brockton, Massachusetts,[1] the son of Joyce (née Whitaker) and Andrew Hill Card, Sr.[2] He was active in the Boy Scouts of America's Old Colony Council and earned the rank of Life Scout. Later, he graduated from the University of South Carolina with a Bachelor of Science degree in engineering. He also attended the United States Merchant Marine Academy and the John F. Kennedy School of Government at Harvard University.[3] Card served as a United States Merchant Marine from 1966 to 1967.

Card got his start in politics serving in the Massachusetts House of Representatives from 1975–1983. He ran unsuccessfully for the Republican nomination for Governor of Massachusetts in 1982.

From 1993 to 1998, Card was President and chief executive officer of the American Automobile Manufacturers Association (AAMA), the trade association whose members were Chrysler Corporation, Ford Motor Company and General Motors Corporation. The AAMA dissolved in December 1998. From 1999 until his selection as President Bush's Chief of Staff, Card was General Motors' Vice President of Government Relations. Card directed the company's international, national, state and local government affairs activities and represented GM on matters of public policy before Congress and the Administration.

He serves on the Board of Directors of Union Pacific Railroad. The railroad announced on July 27, 2006 that Card was elected to the board, increasing the board's size to 10 members.[4] He is also a senior counselor at public relations firm Fleishman-Hillard.[5]

In 2000, Card was asked by Texas Governor George W. Bush to run the Republican National Convention in Philadelphia.

On November 26, 2000, Card was appointed to be chief of staff for President-elect George W. Bush upon Bush's January 20, 2001 inauguration.

On September 11, 2001, it was Card who famously approached Bush as he was visiting Emma E. Booker Elementary School in Sarasota, Florida, and whispered in his ear the news that a second plane had hit the World Trade Center, confirming that a terrorist attack was underway.[6] Card later recounted his story, saying that he whispered "A second plane has hit the second tower. America is under attack."[7]

On March 28, 2006, the White House announced that Card would resign as Chief of Staff and be replaced by United States Office of Management and Budget director Joshua B. Bolten.[8] Card's resignation was effective April 14, 2006.[9] 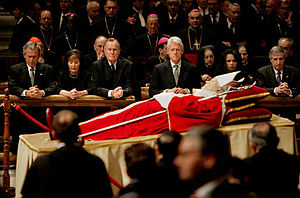 Card received an honorary degree from the University of Massachusetts Amherst on May 25, 2007. While accepting the degree, Card was booed loudly by students and faculty who disapproved of him receiving the honor.[10]

Card considered running in the 2010 special election to fill the United States Senate seat held by Ted Kennedy, who had died in office. State Senator Scott Brown, who considered entering the race, promised to drop out if Card decided to run.[11] Card announced on September 11, 2009 that he would not enter the race and that he was throwing his support to Brown, who went on to win the election.[12]

On July 5, 2011, Card was named acting dean of The Bush School of Government and Public Service at Texas A&M University.[13]

It was announced on November 25, 2014 that Card had been selected as the fifth president of Franklin Pierce University in Rindge, New Hampshire.[14] He began his tenure in December 2014.

Card is a native of Holbrook, Massachusetts, where he lives with his wife Kathy, who is an ordained United Methodist minister. The couple has three children and six grandchildren.