Andrey Nikolayevich Tikhonov (Russian: Андре́й Никола́евич Ти́хонов; October 17, 1906 – October 7, 1993) was a Soviet and Russian mathematician and geophysicist known for important contributions to topology, functional analysis, mathematical physics, and ill-posed problems. He was also one of the inventors of the magnetotellurics method in geophysics. Other transliterations of his surname include "Tychonoff", "Tychonov", "Tihonov", "Tichonov."

Tikhonov worked in a number of different fields in mathematics. He made important contributions to topology, functional analysis, mathematical physics, and certain classes of ill-posed problems. Tikhonov regularization, one of the most widely used methods to solve ill-posed inverse problems, is named in his honor. He is best known for his work on topology, including the metrization theorem he proved in 1926, and the Tychonoff's theorem, which states that every product of arbitrarily many compact topological spaces is again compact. In his honor, completely regular topological spaces are also named Tychonoff spaces.

In mathematical physics, he proved the fundamental uniqueness theorems for the heat equation[2] and studied Volterra integral equations.

He founded the theory of asymptotic analysis for differential equations with small parameter in the leading derivative.[3]

Tikhonov played the leading role in founding the Faculty of Computational Mathematics and Cybernetics of Moscow State University and served as its first dean during the period of 1970–1990. 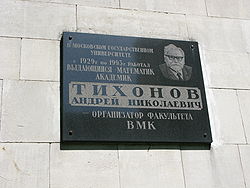 Memorial board of A.N. Tikhonov on the MSU Second Humanities Building where the Faculty of Computational Mathematics and Cybernetics is located

Tikhonov received numerous honors and awards for his work, including the Lenin Prize (1966) and the Hero of Socialist Labor (1954, 1986).