From Infogalactic: the planetary knowledge core
Jump to: navigation, search
For celestial being in Hindu mythology, see Angiris. 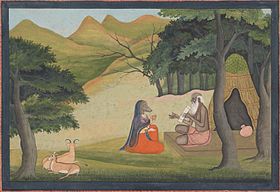 Angiras (अंगिरस्, pronounced [əŋɡirəs]; nominative singular Angirā, अंगिरा [əŋɡirɑː]) is a rishi (or sage) who, along with sage Atharvan, is credited with having formulated ("heard") most of the fourth Veda called Atharvaveda. He is also mentioned in the other three Vedas. Sometimes he is reckoned as one of the Seven Great Sages, or saptarishis of the first Manvantara, with others being, Marichi, Atri, Pulaha, Kratu, Pulastya, and Vashishtha [1] Bharadwaja maharshis was his descendant.

His wife is Surūpa and his sons are Utathya, Samvartana and Bṛhaspati.[2] He is one of the ten manasputras (wish-born-son) of Lord Brahma. Other accounts say that he married Smriti (memory), the daughter of Daksha and later married Svadha (oblation).[3]

The name Angirasas is applied generically to several Puranic individuals and things; a class of Pitris, the ancestors of man according to Hindu Vedic writings, and probably descended from the sage Angiras. In the Rigveda, Agni is sometimes referred to as Angiras or as a descendant of Angiras (RV 1.1). In the Rigveda, Indra drives out cows from where they had been imprisoned by either a demon (Vala) or multiple demons (the Panis) and gifts them to the Angirasas (RV 3.31, 10.108 and a reference in 8.14). Mandala 6 of the Rigveda is attributed to a family of Angirasas.[3]

In order to assist him in the process of Creation, Brahma the Creator, created his first sons: the “Manasa putras”, and “Prajapatis”. After some time, by his will (ichha), he again gave birth to another son from his “Budhhi” (higher intellect) (and thus called a Manasa putra - child borne out of divine intellect). He is Angirasa. Brahma granted him great divine glow (Tejas – not a physical glow but an inner spiritual capacity that emanates wisdom, power, and divinity) enough to fill the three universes.

Thus spoke Brahma to him “O Angirasa, you are my third “manasa putra” (the one born out of divine intellect). My creation is multiplying with several worlds and species. Humans and other species are growing in numbers and generations. And welfare of this creation is your purpose. Your mission is to come to me whenever I remember or recall you and fulfill my word from time to time. Whatever I design as your duty for the welfare the creation, you must do. You must now go on a very long and unbroken penance and bequeath its fruit to the welfare of all beings in the creation. You must remain so till I order you again, to take up family life (Grihasta Ashrama)”. Angirasa then replied, “You are the reason for my birth and of all this creation. And therefore, you are my almighty Lord. You create us with infinite and unconditional love. You are all knowing. You are omnipotent. You created me with a purpose in mind. Though you do not need anybody’s assistance, you are asking me to do this penance. I shall consider it as your grace and opportunity to serve you. I will obey your every word”, and went on to perform intense penance.

Angirasa turned his senses inwards and meditated on Para-Brahman, the creator of the creator, for several years. The great Tejas he got by birth had multiplied infinitely by his penance. He attained many divine qualities, powers, and riches, and control over many worlds. But he was oblivious of all the worldly attainments and did not stop his penance. Due to this penance he became one with the Para-Brahman and thus attained the state of “Brahmarshi”. He had visions of many Vedic Mantras and brought them to this earthly world. He is credited as being the source of great number of Vedic Hymns and mantras and also believed to have introduced fire-worship along with sage Bhrigu.[3] The whole creation was blessed by the wisdom from his word.

Over the course of time, upon Lord Brahma’s grace and will, there came the moment for Angirasa’s marriage. Besides Angirasa, there were eight other “Brahmarshi”s –namely, Marichi, Atri, Pulaha, Pulastya, Kratu, Bhrigu, Vashishta and Adharva . They were called the “Nava Brahmas” – the nine Brahmas. Kardama Prajapati, together with his wife Devahooti, performed great penance over the banks of River Saraswati and by the grace of Lord Vishnu begot nine daughters – Kala, Anasuya, Sradha, Harbhivu, Gati, Kriya, Khyati, Arundhati, Shanti - and a son called Kapilacharya. He wished to give his daughters to worthy sages. He then went to the Nava Brahmas and prayed them to accept his daughters as spouses. He gave Kala to Marichi, Anasuya to Atri, Shraddha to Angirasa, Havribhuvu to Pulaha, Gati to Pulastya, Kriya to Kratu, Khyati to Bhrigu, Arundhati to Vashishta, and Shanti to Adharva and performed their marriages. They transcended all physical desires and conducted divine lives. They used the marriage life as vehicle for penance and devotion. Their five senses, limbs, and mind were all dedicated to the service and worship of God.

Upon Brahma’s desire Angirasa begot seven sons: Brihat Keerti (a.k.a. Utathya), Brihat Jyoti (a.k.a. Samvarta), Brihat Brahma, Brihan Manas, Brihan Mantra, Brihat Bhanu, Brihaspati. He also had seven daughters: Bhanumati, Raka, Cinee Vali, Ekaneka, Archishamati, Mahishmati, Mahamati. It’s in the lore that Samvarta is still in his physical body and is living as a wandering naked monk in Varanasi and small forests around it in a state of total “Vairagya” and absolute union with “Para Brahman”. He is of intense nature. He is known to shun the company of humans and would curse and throw stones at people who try to see him. But if anybody perseveres and gets his darshan, he would bless them with liberation. All of the sages in his lineage are known to have “Angirasa” or “Angir” as their last name. Sage “Ayaasa” was born in this lineage and attained great fame after he envisioned new Vedic Mantras.