Anglican Marian theology is the summation of the doctrines and beliefs of Anglicanism concerning the Blessed Virgin Mary. As Anglicans believe that Jesus was both human and God the Son, the second Person of the Trinity, within the Anglican Communion and Continuing Anglican churches, Mary is accorded honour as the theotokos, literally the "God-bearer" or "one who gives birth to God".

Anglicans of evangelical or low church tradition tend to avoid honouring Mary. Other Anglicans respect and honour Mary because of the special religious significance that she has within Christianity as the mother of Jesus Christ. This honour and respect is termed veneration.

Mary always held a place of honour within the English Church, but many of the doctrines surrounding her have been called into question over the centuries, most as the result of the Protestant Reformation. While Protestantism is based upon interpretation of scripture by a variety of 16th century reformers, who mostly rejected the practice of speaking directly to Mary and other saints (except in certain hymns, e.g. Ye Watchers and Ye Holy Ones, canticles, e.g. the Benedicite, and psalms, e.g. Psalm 148), Anglicanism has allowed for Mary and the saints to be addressed.

In the 12th-century legends surrounding King Lucius, the apostles Fagan and Duvian were said to have erected the St Mary's at Glastonbury as the oldest church in Britain in the mid-2nd century.[1] Later accounts pushed its origin still farther back and credited its foundation to a visit by Joseph of Arimathea in AD 65.[citation needed] Both legends are now held to have been pious forgeries.

The British church generally preferred to dedicate parish churches to local saints credited with founding the llan and introducing Christianity to the area. Replacing these native foundations with more generic dedications to St Peter, St Paul, and the Virgin Mary was a common aspect of the Saxon and Norman invasions, in some cases leading to oddities like the village near Cardiff still known as St Fagans despite having had a parish church dedicated to St Mary, the Blessed Virgin, since the 12th century. By the High Middle Ages, Marian piety was so widespread throughout the country that England had become known as the Dowry of Mary. England was the first country to celebrate the Feast of the Assumption, in 1060.[citation needed]

Many of the great English saints were devoted to Mary and wrote prayers about her. The Carmelite Saint Simon Stock is said to have received the Brown Scapular from her in the city of Cambridge on Sunday, July 16, 1251. Saint Edmund of Canterbury wrote many prayers addressed to her. Saint Richard of Chichester and Saint Thomas Becket were also especially devoted to Mary, but the English saint best known for his devotion was Saint Anselm of Canterbury, who wrote many prayers and books about and dedicated to "the spotless Ever-Virgin Mother of Christ".

One aspect of the English Reformation was a widespread reaction against Mary as a mediatrix alongside Christ, or sometimes even in his place. Such exaggerated devotions, in part inspired by presentations of Christ as an inaccessible Judge as well as Redeemer, were criticized by Erasmus and Thomas More and rejected by the Church of England. Together with a new emphasis on Scripture as the fundamental standard of faith, there was a renewed devotion by the Reformers to the belief that Jesus Christ is the only mediator between God the Father and humanity. This rejected any overt devotion to Mary and diminished her place in the life of the Church.

The English Reformers' positive teaching about Mary concentrated on her role in the Incarnation. It is summed up in their acceptance of her as the Mother of God, because this was seen to be both scriptural and traditional. Following the traditions of the Early Church and other Reformers like Martin Luther and John Calvin, the English Reformers such as Hugh Latimer, Thomas Cranmer and John Jewel accepted the perpetual virginity of Mary. They neither affirmed nor denied the possibility of Mary having been preserved by grace from participation in original sin. The Book of Common Prayer in the Christmas collect and preface refers to Mary as "a pure Virgin".

From 1561, the calendar of the Church of England contained five feasts associated with Mary: The Conception of Mary, Nativity of Mary, Annunciation, Visitation, and Purification. There was, however, no longer a feast of the Assumption (August 15): not only was it not found in the Bible, but was also seen as exalting Mary to a level above Christ. Scottish and Canadian revisions of the Prayer Book restored August 15 as the Falling Asleep of the Blessed Virgin Mary. 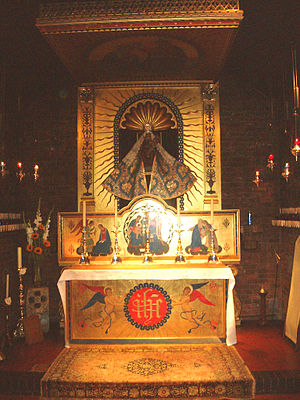 The Holy House in the Anglican Shrine of Our Lady of Walsingham.

Despite the novel lack of devotion to Mary, starting in the 16th century, reverence for her continued in the use of the Magnificat in Evening Prayer, and the naming and dedication of ancient churches and Lady Chapels. In the 17th century writers such as Lancelot Andrewes, Jeremy Taylor, and Thomas Ken took from catholic tradition a fuller appreciation of the place of Mary in the prayers of the Church. Andrewes in his Preces Privatae borrowed from Eastern liturgies to deepen his Marian devotion. This re-appropriation can be traced into the next century, and into the Oxford Movement of the 19th century.

In 1922 the creation of a new statue of Our Lady of Walsingham under the aegis of Father Alfred Hope Patten, reignited Anglican interest in a revival of the pre-Reformation pilgrimage. From the early 1930s Walsingham became a centre of Anglican as well as Catholic Marian pilgrimage.

Mary has a new prominence in Anglicanism through the liturgical renewals of the 20th century. In most Anglican prayer books, Mary is again mentioned by name in the liturgical prayers. Further, August 15 has come to be widely celebrated as a principal feast in honour of Saint Mary the Virgin with Scripture readings, collect, and proper preface. Other ancient feasts associated with Mary have also been renewed, and liturgical resources offered for use on these festivals. Marian devotions such as the Rosary, Angelus, and Regina Coeli are most commonly associated with the Anglo-Catholic and High Church movements within Anglicanism.

An Anglo-Catholic manual, Saint Augustine's Prayer Book: A Book of Devotion for members of the Episcopal Church, first published in 1947, includes a section containing devotions to the Blessed Virgin Mary. This includes the Rosary, the four seasonal Marian antiphons, the Memorare, and litanies of the Blessed Virgin and Our Lady of Sorrows. A Revised Edition was published in 1967, and the book remains in print with Holy Cross Publications. The Anglo-Catholic Prayer book, a classic, was published in an entirely new edition in 2000, and it also includes a section of prayers to the Blessed Virgin, including to her Immaculate Conception and Assumption.

Anglican theologian Hugh Montefiore, former Bishop of Birmingham, while denying the immaculate conception and the bodily assumption of Mary into heaven, says "Christians rightly honour and venerate her as one of the great saints of God. God had signally honoured her by choosing her to be the mother of Jesus."[2]

Some of the most famous chapels dedicated to Mary have been Lady chapels. Since the end of the 6th century Lady Chapels have existed in most English cathedrals, where they often form part of the apse. Traditionally, a Lady chapel is the largest chapel of a cathedral. Generally, the chapel was built east of the high altar and formed a projection from the main building.

The earliest Lady Chapel of certain historicity was that in the Anglo-Saxon cathedral at Canterbury. Unusually, at Ely the Lady Chapel is an almost separate building to the north of the Choir. The Lady Chapels at Norwich and Peterborough (in a similar position to Ely's) cathedrals were destroyed during the English Reformation.

Probably the most famous Lady-chapel was the Chapel of Our Lady of the Pew, built by Henry III in 1220 at Westminster Abbey. The Abbey also contains Henry VII's Lady Chapel.

To encourage ecumenical cooperation despite differences over other matters, the Roman Catholic and Anglican churches issued a joint statement, "Mary: Grace and Hope in Christ" (also known as the Seattle Statement) on the role of the Virgin Mary in Christianity. The document was released May 16, 2005 in Seattle, Washington, by Alexander Brunett, the local Catholic Archbishop, and Peter Carnley, Anglican Archbishop of Perth, Western Australia, co-chairmen of the Anglican-Roman Catholic International Commission (ARCIC).[3]

Much has been made of the difference between the Mariology of Anglicans and that of Roman Catholics. Because Anglicanism does not have an official view about these doctrines, it can be difficult to say with precision what Anglicans believe. The description here attempts to sketch out the areas where Anglicans are in agreement that there is no official binding doctrine.

Roman Catholic Mariology contends that a veneration (hyperdulia) should be given to Mary that is higher than the dulia given to the other saints. Worship (latria) is properly given only to God. While Anglicans can agree that God alone is to be worshipped, many do not agree that Mary should receive a degree of veneration above the other saints. Some Anglicans agree with the Eastern Orthodox that Mary is simply the greatest of all the Saints, and that she should be venerated as such.

Anglicanism also does not accept the doctrines of the Assumption or the Immaculate Conception as binding, though some Anglicans do accept these doctrines, particularly the former.[citation needed] Even then, they are not held to the particular forms used by the Roman Catholic Church to define them. Many[citation needed] agree with the Eastern Orthodox rejection of the Immaculate Conception, while agreeing that Mary was without actual sin during her life. Many also are more in agreement with the Dormition of Mary as understood by the Orthodox.