From Infogalactic: the planetary knowledge core
Jump to: navigation, search
For other uses, see Angst (disambiguation). 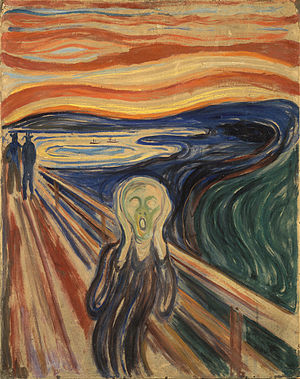 Edvard Munch tried to represent "an infinite scream passing through nature" in The Scream (1893).

Angst means fear or anxiety (anguish is its Latinate equivalent, and anxious, anxiety are of similar origin). The word angst was introduced into English from the Danish, Norwegian and Dutch word angst and the German word Angst. It is attested since the 19th century in English translations of the works of Kierkegaard and Freud.[1][2][3] It is used in English to describe an intense feeling of apprehension, anxiety, or inner turmoil.

In German, the technical terminology of psychology and philosophy distinguishes between Angst and Furcht in that Furcht is a negative anticipation regarding a concrete threat, while Angst is a non-directional and unmotivated emotion. In common language, however, Angst is the normal word for "fear", while Furcht is an elevated synonym.[4]

In other languages having the meaning of the Latin word pavor for "fear", the derived words differ in meaning, e.g. as in the French anxiété and peur. The word Angst has existed since the 8th century, from the Proto-Indo-European root *anghu-, "restraint" from which Old High German angust developed.[5] It is pre-cognate with the Latin angustia, "tensity, tightness" and angor, "choking, clogging"; compare to the Ancient Greek ἄγχω (ankho) "strangle".

In Existentialist philosophy the term angst carries a specific conceptual meaning. The use of the term was first attributed to Danish philosopher Søren Kierkegaard (1813–1855). In The Concept of Anxiety (also known as The Concept of Dread, depending on the translation), Kierkegaard used the word Angest (in common Danish, angst, meaning "dread" or "anxiety") to describe a profound and deep-seated condition. Where animals are guided solely by instinct, said Kierkegaard, human beings enjoy a freedom of choice that we find both appealing and terrifying.[5][6] Kierkegaard's concept of angst reappeared in the works of existentialist philosophers who followed, such as Friedrich Nietzsche, Jean-Paul Sartre and Martin Heidegger, each of whom developed the idea further in individual ways. While Kierkegaard's angst referred mainly to ambiguous feelings about moral freedom within a religious personal belief system, later existentialists discussed conflicts of personal principles, cultural norms, and existential despair.

Existential angst makes its appearance in classical musical composition in the early twentieth century as a result of both philosophical developments and as a reflection of the war-torn times. Notable composers whose works are often linked with the concept include Gustav Mahler, Richard Strauss (operas Elektra and Salome), Claude-Achille Debussy (opera Pelleas et Melisande, ballet Jeux, other works), Jean Sibelius (especially the Fourth Symphony), Arnold Schoenberg (A Survivor from Warsaw, other works), Alban Berg, Francis Poulenc (opera Dialogues of the Carmelites), Dmitri Shostakovich (opera Lady Macbeth of the Mtsensk District, symphonies and chamber music), Béla Bartók (opera Bluebeard's Castle, other works), and Krzysztof Penderecki (especially Threnody to the Victims of Hiroshima).

Angst began to be discussed in reference to popular music in the mid- to late 1950s amid widespread concerns over international tensions and nuclear proliferation. Jeff Nuttall's book Bomb Culture (1968) traced angst in popular culture to Hiroshima. Dread was expressed in works of folk rock such as Bob Dylan's Masters of War (1963) and A Hard Rain's a-Gonna Fall. The term often makes an appearance in reference to punk rock, grunge, nu metal, and works of emo where expressions of melancholy, existential despair or nihilism predominate.