Anna Marly (Russian: Анна Юрьевна Смирнова-Марли), (30 October 1917 – 15 February 2006), was a Russian-born French singer-songwriter. Born into a wealthy Russian noble family, Marly came to France very young, just after her father was killed in the aftermath of the October Revolution. She is best remembered as the composer of the Chant des Partisans, a song that was used as the unofficial anthem of the Free French Forces during World War II; the popularity of the Chant des Partisans was such that it was proposed as a new national anthem after the conclusion of the war.

Marly (born Anna Yurievna Betulinskaya) was born into a Russian noble family living in Saint Petersburg during the October Revolution. Her father belonged to an aristocratic family connected by family ties to tsarist prime minister Pyotr Stolypin, poet Mikhail Lermontov and philosopher Nicholas Berdyaev. Her mother (Maria Mikhailovna Alferaki) was a descendant of the Greek-Russian noble family of Alferaki who lived in Taganrog in the Alferaki Palace before moving to Saint Petersburg. Yuriy Betulinski was arrested and executed before Marly's first birthday. The rest of the family, along with a number of other White Russian refugees, fled across the Finnish border shortly after this, eventually settling in the French town of Menton.

In her youth Marly had worked as a ballet dancer in Monte Carlo, and been taught by the Russian composer Sergei Prokofiev. By the age of 17 she was performing her own compositions in the cabaret clubs of Paris, it was at this time that she adopted the name "Marly", supposedly selecting it from a telephone directory, her original name, "Betoulinsky", being too difficult for French speakers to pronounce.

After the fall of France in 1940 Marly fled to London with her Dutch husband. It was while she was in London that she made contact with the Free French rebels. Emmanuel d'Astier de La Vigerie, a prominent figure in the resistance, heard Marly sing the Chant des Partisans in Russian when he visited London in 1943. He asked the writers Joseph Kessel and Maurice Druon, both of whom had travelled with him, to translate the song into French. D'Astier asked for the translation with the intention of using the song as a replacement for La Marseillaise, which had been banned by the Nazi party. Following this translation, the song quickly established itself as the surrogate anthem of the supporters of the French resistance both in France and Britain. Kessel and Druon, however, took the credit for writing the song; it was not until some years later that she gained the recognition she deserved for writing the original song.

Towards the end of the war Marly joined the Entertainments National Service Association, performing her songs to the Allied forces across Europe. She divorced her husband after the war, shortly afterwards marrying a fellow Russian White emigre refugee. They originally moved to South America before finally settling in Lazy Mountain, Alaska, she and her husband eventually becoming US citizens. 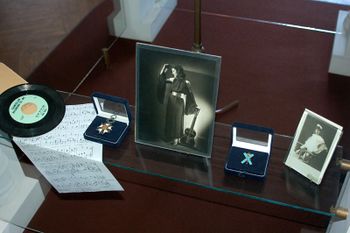 Anna Marly memorabilia (incl. authentic Légion d'Honneur (1985) and a golden medal (1988)) offered by the French singer to the Alferaki Palace in 2002.

Anna Marly also wrote "A Song in Triple Time" ("Une chanson à trois temps") for Édith Piaf and "La complainte du partisan" (known as "The Partisan"). In the United States, "The Partisan" gained popularity when Leonard Cohen released it in 1969 and Joan Baez in 1972.

Many French singers have recorded "Chant des partisans", including Yves Montand in 1955.

In recognition of the importance of "Le chant des partisans" Marly was named a chevalier de La Légion d'Honneur by François Mitterrand in 1985, the fortieth anniversary of the liberation of France.