From Infogalactic: the planetary knowledge core
Jump to: navigation, search
Not to be confused with Anorthite.

Anorthosite /ænˈɔːrθəsaɪt/ is a phaneritic, intrusive igneous rock characterized by a predominance of plagioclase feldspar (90–100%), and a minimal mafic component (0–10%). Pyroxene, ilmenite, magnetite, and olivine are the mafic minerals most commonly present.

Anorthosite on Earth can be divided into two types: Proterozoic anorthosite (also known as massif or massif-type anorthosite) and Archean anorthosite. These two types of anorthosite have different modes of occurrence, appear to be restricted to different periods in Earth's history, and are thought to have had different origins.

Lunar anorthosites constitute the light-coloured areas of the Moon's surface and have been the subject of much research.[1]

Proterozoic anorthosites were emplaced during the Proterozoic Eon (ca. 2,500–542 Ma).

Many Proterozoic anorthosites occur in spatial association with other highly distinctive, contemporaneous rock types (the so-called 'anorthosite suite' or 'anorthosite-mangerite-charnockite complex'). These rock types include iron-rich diorite, gabbro, and norite; leucocratic mafic rocks such as leucotroctolite and leuconorite; and iron-rich felsic rocks, including monzonite and rapakivi granite. Importantly, large volumes of ultramafic rocks are not found in association with Proterozoic anorthosites.

Occurrences of Proterozoic anorthosites are commonly referred to as 'massifs'. However, there is some question as to what name would best describe any occurrence of anorthosite together with the rock types mentioned above. Early works used the term 'complex' The term 'plutonic suite' has been applied to some large occurrences in northern Labrador, Canada; however, it has been suggested (in 2004–2005) that 'batholith' would be a better term. 'Batholith' is used to describe such occurrences for the remainder of this article.

The areal extent of anorthosite batholiths ranges from relatively small (dozens or hundreds of square kilometres) to nearly 20,000 km2 (7,700 sq mi), in the instance of the Nain Plutonic Suite in northern Labrador, Canada.

Major occurrences of Proterozoic anorthosite are found in the southwest U.S., the Appalachian Mountains, eastern Canada, across southern Scandinavia and eastern Europe. Mapped onto the Pangaean continental configuration of that eon, these occurrences are all contained in a single straight belt, and must all have been emplaced intracratonally. The conditions and constraints of this pattern of origin and distribution are not clear. However, see the Origins section below. 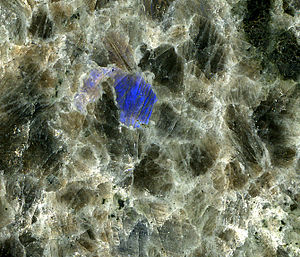 Since they are primarily composed of plagioclase feldspar, most of Proterozoic anorthosites appear, in outcrop, to be grey or bluish. Individual plagioclase crystals may be black, white, blue, or grey, and may exhibit an iridescence known as labradorescence on fresh surfaces. The feldspar variety labradorite is commonly present in anorthosites. Mineralogically, labradorite is a compositional term for any calcium-rich plagioclase feldspar containing 50–70 molecular percent anorthite (An 50–70), regardless of whether it shows labradorescence. The mafic mineral in Proterozoic anorthosite may be clinopyroxene, orthopyroxene, olivine, or, more rarely, amphibole. Oxides, such as magnetite or ilmenite, are also common.

While many Proterozoic anorthosite plutons appear to have no large-scale relict igneous structures (having instead post-emplacement deformational structures), some do have igneous layering, which may be defined by crystal size, mafic content, or chemical characteristics. Such layering clearly has origins with a rheologically liquid-state magma.

The trace-element chemistry of Proterozoic anorthosites, and the associated rock types, has been examined in some detail by researchers with the aim of arriving at a plausible genetic theory. However, there is still little agreement on just what the results mean for anorthosite genesis; see the 'Origins' section below. A very short list of results, including results for rocks thought to be related to Proterozoic anorthosites,[4][clarification needed]

The origins of Proterozoic anorthosites have been a subject of theoretical debate for many decades. A brief synopsis of this problem is as follows. The problem begins with the generation of magma, the necessary precursor of any igneous rock.

Magma generated by small amounts of partial melting of the mantle is generally of basaltic composition. Under normal conditions, the composition of basaltic magma requires it to crystallize between 50 and 70% plagioclase, with the bulk of the remainder of the magma crystallizing as mafic minerals. However, anorthosites are defined by a high plagioclase content (90–100% plagioclase), and are not found in association with contemporaneous ultramafic rocks. This is now known as 'the anorthosite problem'. Proposed solutions to the anorthosite problem have been diverse, with many of the proposals drawing on different geological subdisciplines.

The discovery, in the late 1970s, of anorthositic dykes in the Nain Plutonic Suite, suggested that the possibility of anorthositic magmas existing at crustal temperatures needed to be reexamined. However, the dykes were later shown to be more complex than was originally thought. In summary, though liquid-state processes clearly operate in some anorthosite plutons, the plutons are probably not derived from anorthositic magmas.

This theory has many appealing features, of which one is the capacity to explain the chemical composition of high-alumina orthopyroxene megacrysts (HAOM). This is detailed below in the section devoted to the HAOM. However, on its own, this hypothesis cannot coherently explain the origins of anorthosites, because it does not fit with, among other things, some important isotopic measurements made on anorthositic rocks in the Nain Plutonic Suite. The Nd and Sr isotopic data show the magma which produced the anorthosites cannot have been derived only from the mantle. Instead, the magma that gave rise to the Nain Plutonic Suite anorthosites must have had a significant crustal component. This discovery led to a slightly more complicated version of the previous hypothesis: Large amounts of basaltic magma form a magma chamber at the base of the crust, and, while crystallizing, assimilating large amounts of crust.[5]

This small addendum explains both the isotopic characteristics and certain other chemical niceties of Proterozoic anorthosite. However, at least one researcher has cogently argued, on the basis of geochemical data, that the mantle's role in production of anorthosites must actually be very limited: the mantle provides only the impetus (heat) for crustal melting, and a small amount of partial melt in the form of basaltic magma. Thus anorthosites are, in this view, derived almost entirely from lower crustal melts.[6]

The high-alumina orthopyroxene megacrysts (HAOM) have, like Proterozoic anorthosites, been the subject of great debate, although a tentative consensus about their origin appears to have emerged. The peculiar characteristic worthy of such debate is reflected in their name. Normal orthopyroxene has chemical composition (Fe,Mg)2Si2O6, whereas the HAOM have anomalously large amounts of aluminium (up to about 9%) in their atomic structure.

Because the solubility of aluminium in orthopyroxene increases with increasing pressure, many researchers,[7] have suggested that the HAOM crystallized at depth, near the base of the Earth's crust. The maximum amounts of aluminium correspond to a 30–35 km (19–22 mi) depth.

Other researchers consider the chemical compositions of the HAOM to be the product of rapid crystallization at moderate or low pressures.[8]

Smaller amounts of anorthosite were emplaced during the Archaean eon (ca 3,800-2,400 Ma), although most have been dated between 3,200 and 2,800 Ma. They are distinct texturally and mineralogically from Proterozoic anorthosite bodies. Their most characteristic feature is the presence of equant megacrysts of plagioclase surrounded by a fine-grained mafic groundmass.

Anorthosite was prominently represented in rock samples brought back from the Moon, and is important in investigations of Mars, Venus, and meteorites.