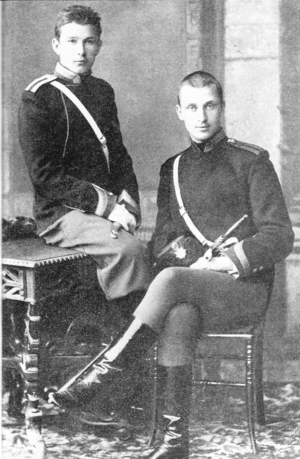 Considered to be of French origin, Druvė was born in the Pavirvytis country-estate area, which previously belonged to the szlachta of the Grand Duchy of Lithuania. After Napoleon's march on Russia, the only person who remained at the country-estate was Drovė's grandfather. During the years 1887 to 1889, Druvė studied at Tsar Nikolai's cavalry school. He later went on to finish at the Academy of Petersburg General's Academy. While at the cavalry school, he was a friend of future Finnish president, Gustaf Mannerheim. During the Russian-Japanese War of 1905, Druvė was seriously wounded. During World War I, in the autumn of 1915, Druvė led the 43rd Regiment of the Russian Cavalry, where he was noted for his fighting against the Germans near the River Daugava. Later he served as an officer in the North-Western front, as a member of staff for operations personnel.

In 1919, with encouragement of Povilas Plechavičius, he secretly returned to Lithuania. He organized anti-Soviet national partisan squads in the towns of Eigirdžiai, Raudėnai, Tryškiai and Ubiškė. Drovė was killed in his home town during an ambush by the Red Army.