Antecedent-contained deletion (= antecedent-contained ellipsis, ACD) is a phenomenon found in contexts containing verb phrase ellipsis and a quantifier. The ellipsis appears to be contained inside its antecedent, which should result in an infinite regress and thus ungrammaticality. The problem arises in phrase structure grammars that take the constituent to be the fundamental unit of syntactic analysis.[1] It does not arise if the catena is taken to be the fundamental unit.[2] The catena is associated with dependency grammars (DGs).[3]

The problem in phrase structure grammars

To understand the issue involved, it is necessary to understand how VP-ellipsis works. Consider the following examples, where the expected, but elided, VP is represented with a smaller font and subscripts and the antecedent to the ellipsis is in bold:

In both of these sentences, the VP has been elided in the second half of the sentence. In both cases, the elided VP should be essentially identical to the antecedent in the first clause. That is, the missing VP in the first sentence can only mean wash the dishes, and in the second sentence, the missing VP can only mean wash the dishes on Tuesday. Assuming that the missing VP must be essentially identical to an antecedent VP leads to a problem, first noticed by Bouton (1970):

Since the elided VP must be essentially identical to its antecedent and assuming that the antecedent is a full VP, an infinite regress occurs, as indicated by the subscripted material, which would continue to repeat itself ad infinitum. That is, if we substitute in the antecedent VP into the position of the ellipsis, we must repeat the substitution process ad infinitum. The difficulty is illustrated further with the tree for the sentence:

Now the reference for the elided VP is simply the following:

The analysis can now assume that the elided VP in the example corresponds to just read, since after QR, the antecedent VP no longer contains the object raised NP. The result is the following analysis:

[every book that Mary did read] John read.

The infinite regress is now avoided because after QR, the antecedent VP contains just the verb read.

An analysis of VP-ellipsis that takes the catena to be the fundamental unit of syntactic analysis (as opposed to the constituent) is not confronted with the antecedent containment problem. The ellipsis can correspond to a non-constituent catena, which means a movement analysis in terms of QR is not needed.[5] The catena is a concrete unit of syntactic analysis associated with dependency grammar (DG); it is defined as any word or any word combination that is continuous with respect to dominance. The subscripted material in the examples above all qualify as catenae. The point is illustrated with the following further examples: 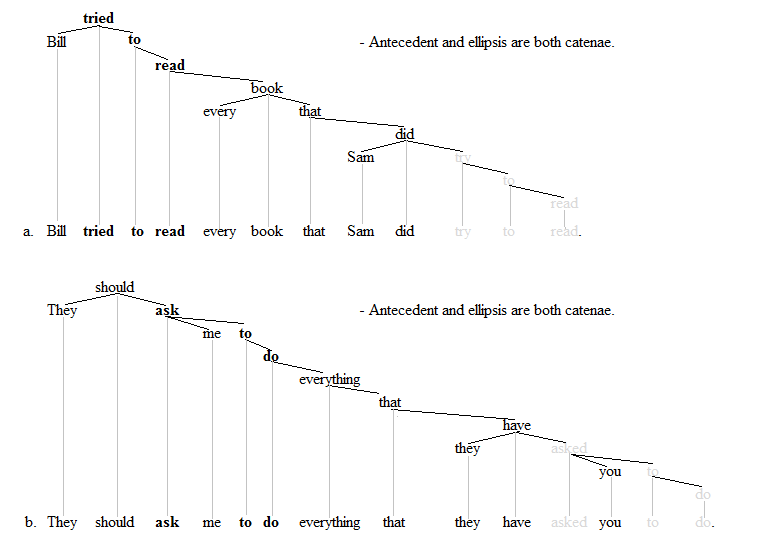 Both the elided material (in light grey) and the antecedent (in bold) to the elided material qualify as catenae. As catenae, both are concrete units of syntactic analysis. The need for a movement-type analysis (in terms of QR or otherwise) does not occur. One can note that the second of the two examples is an instance of pseudogapping, pseudogapping being a particular manifestation of VP-ellipsis.