Many drug preparations used in anthroposophic medicine are ultra-diluted substances, similar to those used in homeopathy. Homeopathic remedies are not medically effective and are generally considered harmless, except when used as a substitute for a scientifically proven and effective cure.[4] In certain European countries, people with cancer are sometimes prescribed remedies made from specially-harvested mistletoe, but research has found no convincing evidence of clinical benefit.[5][6] Some anthroposophic doctors oppose childhood vaccination, and this has led to preventable outbreaks of disease.[7] Professor of complementary medicine Edzard Ernst and other critics have characterized anthroposophic medicine as having no basis in science,[8] pseudoscientific,[9] and quackery.[10]

Anthroposophic medicine departs from fundamental biological principles in several respects. For example, it claims that the heart does not pump blood but that blood propels itself along.[11] Anthroposophic medicine also proposes that a patient's past lives may influence their illness[12] and that the course of an illness is subject to karmic destiny.[13] 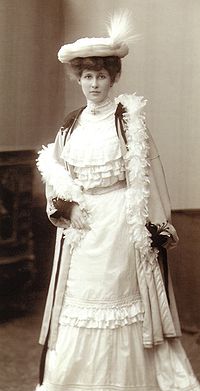 Ita Wegman, co-founder of the medical approach, before 1900 in Berlin.

At Wegman's request, Steiner regularly visited the clinic and suggested treatment regimes for particular patients. Between 1920 and 1925, he also gave several series of lectures on medicine. In 1925, Wegman and Steiner wrote the first book on the anthroposophic approach to medicine, Fundamentals of Therapy.

The clinic expanded and soon opened a branch in Ascona. Wegman lectured widely, visiting the Netherlands and England particularly frequently, and an increasing number of doctors began to include the anthroposophic approach in their practices. A cancer clinic, the Lukas Clinic, opened in Arlesheim in 1963.[15]

In the 1990s the Witten/Herdecke University in Germany established a chair in anthroposophical medicine. The press described the appointment as a "death sentence" and the perception that pseudoscience was being taught damaged the university's reputation, bringing it close to financial collapse. It was ultimately saved by a cash injection from Software AG, a technology corporation with a history of funding anthroposophic projects.[8]

In 2006, anthroposophical medicine was practised in 80 countries.[17][unreliable source?]

In 2012 the University of Aberdeen considered establishing a chair in holistic health jointly funded by Software AG, and by the Anthroposophic Health, Education, and Social Care Movement, each of which would provide £1.5 million of endowment.[8] Edzard Ernst commented "that any decent university should even consider an anthroposophical medicine unit seems incomprehensible. The fact that it would be backed by people who have a financial interest in this bogus approach makes it even worse."[8] The University's governance and nominations committee eventually decided not to proceed with the appointment.[10]

Ernst writes that Steiner used imagination and insight as a basis for his ideas, drawing mystical knowledge from the occult Akashic Records, a work which is supposedly situated on the astral plane, and which Steiner said was accessible to him via his intuitive powers.[4] On this basis, Steiner proposed "associations between four postulated dimensions of the human body (physical body, etheric body, astral body, and ego), plants, minerals, and the cosmos".[3] Steiner also proposed a connection betweens planets, metals and organs so that, for example, the planet Mercury, the element mercury and the lung were all somehow associated. These propositions form the basis of anthroposophical medicine.[4]

Ernst has said that anthroposophical medicine "includes some of the least plausible theories one could possibly imagine",[18] categorized it as "pure quackery",[10] and said that it "has no basis in science".[8] According to Quackwatch, anthroposophical medicine practitioners regard illness as a "rite of passage" necessary to purge spiritual impurities carried over from past lives, according to the precepts of "karmic destiny".[12]

In anthroposophic pharmacy drugs are prepared according to ancient notions of alchemy and homeopathy which are not related to the science underlying modern pharmacology.[3] During the preparation process, patterns formed by crystallization are interpreted to see which "etheric force" they most closely resemble.[9] Most anthroposophic preparations are highly diluted, like homeopathic remedies, and while this means they are completely harmless in themselves, using them in place of conventional medicine to treat serious illness risks severe adverse consequences.[4]

To select an anthroposophic substance for a particular illness, practitioners consider the source of the substances used. The character of a mineral, plant or animal is hypothesised to have been formed by the substances that are most active within it in the belief that this character may also influence what the substance will accomplish when given to treat another organism. This is related to Samuel Hahnemann's Doctrine of signatures. Willow, for example, is considered to have an unusual character:

... plants that grow near water are usually heavy, with big, dark green leaves that wilt and break easily. An exception is... the white willow, a tree that always grows near water and loves light. However, unlike other "watery" plants, the willow has fine, almost dry leaves and looks very light... Its branches are unbelievably tough. They are elastic and cannot be broken. They bend easily and form "joints" rather than break. These few signatures can give us the clue to what salix can be used for therapeutically: arthritis, deformation of joints, swollen joints...[21]

There is no scientific evidence that the shape of plants has ever caused a new medical property to be discovered.[22]

Steiner described the heart not as a pump, but as a regulator of flow, such that the heartbeat itself can be distinguished from the circulation of blood.[11][23] Anthroposophic medicine claims the flow in the blood of the circulatory system is, as Marinelli put it, "propelled with its own biological momentum, as can be seen in the embryo, and boosts itself with induced momenta from the heart".[11][24]

This view of the heart is not based on any scientific theory and has been characterized as "crank science".[23] 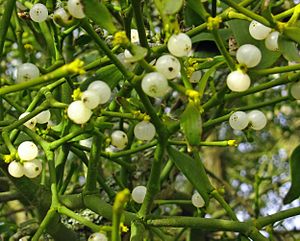 Rudolf Steiner hypothesised that mistletoe could cure cancer based on the observation that the plant was a parasite which eventually killed its host, a process which he claimed paralleled the progression of cancer.[3] Steiner believed the plant's medical potential was influenced by the position of the sun, moon and planets and that it therefore was important to harvest the plant at the right time.[25] Some mistletoe preparations are ultra-diluted; others are made from fermented mistletoe.[3] The most commonly used trade names for mistletoe drugs are Iscador and Helixor.[5]

Although laboratory and animal experiments have suggested that mistletoe extract may affect the immune system and be able to kill some kinds of cancer cells, there is little evidence of its benefit to people with cancer.[26][6] Most of the clinical research claiming that mistletoe therapy is effective is published in Germany, and it is generally considered unreliable because of major lapses in quality.[27][26] Edzard Ernst wrote that research by anthroposophic doctors often reached positive conclusions on mistletoe therapy because it drew on unreliable material; independent researchers tended instead to find no evidence of benefit.[3] The American Cancer Society say that "available evidence from well-designed clinical trials does not support claims that mistletoe can improve length or quality of life".[5]

Mistletoe-based cancer drugs are widely used in Europe, especially in German-speaking countries.[27] In 2002 nearly half a million prescriptions were paid for by German health insurance and in 2006 there were reportedly around 30 types of mistletoe extract on the market.[27][3] Mistletoe extracts have been used as an unconventional treatment for cancer patients in the Netherlands, and in Germany the treatment has been approved as palliative therapy to treat the symptoms of patients with malignant tumors.[5] In Sweden, controversially, mistletoe therapy has been approved for use in the treatment of cancer symptoms.[28]

In other countries mistletoe therapy is virtually unknown.[27] The United States Food and Drug Administration has not approved mistletoe-based drugs for any purpose; mistletoe extracts may not be distributed in or imported into the USA except for research purposes.[26] As of 2015[update] no mistletoe-based drugs are licensed for use in the United Kingdom.[29]

A 2013 article on mistletoe in Lancet Oncology invoked Ben Goldacre's observation that a geographical preference for certain therapies was a hallmark of quackery, and proposed that the continuing use of this "apparently ineffectual therapy" in a small cluster of countries was based on sociological rather than medical reasons, indicating a need for better-informed consent from patients.[27]

In 2008 anthroposophic medicines which are not homeopathic have been required in the Netherlands to get marketing certification as any other ordinary medicines.[30] This means that these will be unavailable until such certification is obtained.[31][32]

A 2003 report of a widespread measles outbreak around Coburg, Germany identified an anthroposophical school as the origin.[4] At the time the town's mayor had condemned homeopathic doctors who had discouraged vaccination, saying "Their stronghold is the Waldorf School, which actively encourages people not to have their children vaccinated. Now we have an epidemic."[33]

Paul Offit writes that Steiner believed that vaccination "interferes with karmic development and the cycles of reincarnation", and that adherence to this belief has led to a 2008 pertussis outbreak in a Californian Waldorf school, causing its temporary closure.[13]