From Infogalactic: the planetary knowledge core
(Redirected from Anti-Revisionism)
Jump to: navigation, search

In the communist lexicon, anti-revisionism is opposition to attempts to revise, modify, or abandon the fundamentals of revolutionary theory and practice. In this view, reformism within communism is rejected as representing dangerous concessions to communism's adversaries.

Because different political trends trace the historical roots of revisionism to different eras and leaders, there is significant disagreement today as to what constitutes anti-revisionism. Therefore, modern groups which describe themselves as anti-revisionist fall into several categories. They universally tend to oppose Trotskyism and de-Stalinization; however, some uphold the works of Marx, Engels, Lenin, Stalin, and Mao (Maoism or Marxism–Leninism–Maoism), and some the works of Marx, Engels, Lenin and Stalin while rejecting Mao (Marxism–Leninism). In addition, other groups uphold various less well-known historical leaders, such as Enver Hoxha (Hoxhaism).

Historically, anti-revisionists presented a critique of the official Communist Parties "from the left" for having abandoned orthodox Marxism–Leninism (becoming "revisionist" and insufficiently revolutionary). The terminological disagreement can be confusing because different versions of a left-right political spectrum are used. Anti-revisionists consider themselves the ultimate leftists on a spectrum from communism on the left to imperialist capitalism on the right. But Stalinism is often labeled rightist within the communist spectrum and left communism leftist. In the wake of Khrushchev's speech to the 20th Congress of the C.P.S.U, the defense of Stalin and his legacy became a hallmark of anti-revisionism. In the 1970s the anti-revisionist movement expanded and diversified to encompass those communists who rejected a pro-Soviet orientation for one aligned either with Chinese or Albanian positions.

Anti-revisionism enjoyed its moment of greatest size and influence with numerous Marxist–Leninist and Maoist parties, groups and publications springing up around the world in the period which began with the Sino-Soviet split of the early 1960s. Its growth was greatly accelerated by international enthusiasm for the Cultural Revolution in China, but it began to decline in response to controversial Chinese foreign policy decisions in the last years of Mao Zedong's life, his death and the subsequent defeat of the Gang of Four. Some anti-revisionists responded to these events with little change to their theoretical orientation, others adjusted their orientation based on world events, while still remaining in the greater anti-revisionist milieu, while yet others took up a non-Trotskyist "left-wing" communism, independent of allegiance to foreign authorities or models, usually abandoning their claim to anti-revisionism in the process. 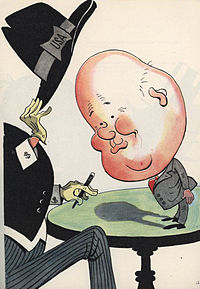 Self-proclaimed anti-revisionists firmly oppose the reforms initiated in Communist countries by leaders like Nikita Khrushchev in the Soviet Union and Deng Xiaoping in China. They generally refer to such reforms and states as state capitalist and social-imperialist. They also reject Trotskyism and its "Permanent Revolution" as "hypocritical" by arguing that Leon Trotsky had at one time thought it acceptable that socialism could work in a single country as long as that country was industrialized, but that Trotsky had considered Russia too backward to achieve such industrialization – what it later in fact did achieve, mostly through his archenemy Joseph Stalin's Five Year Plans.

In their own right, anti-revisionists also acknowledge that the Soviet Union contained a "new class" or "'red' bourgeoisie," but they generally place the blame for the formation of that class on Khrushchev and his successors, and not on Stalin. Therefore, in anti-revisionist circles, there is very little talk of class conflict in the Soviet Union before 1956, except when talking about specific contexts such as the Russian Civil War (when some agents of the former feudal ruling class tried to retake state power from the Bolsheviks) and World War II (fought principally between communists and fascists, representing the interests of the proletariat and the bourgeoisie respectively).

During the Sino-Soviet split, the governments of the People's Republic of China under Mao Zedong and the People's Republic of Albania under Enver Hoxha proclaimed themselves to be taking an anti-revisionist line and denounced Khrushchev's policies in the Soviet Union. In the United States, those who supported China or Albania at the time were expelled from the United States Communist Party under orders from Moscow, and in 1961 they formed the Progressive Labor Movement and other "new communist movement" communist parties. A short time later, anti-revisionist groups were further divided by the Sino-Albanian split, with those following Albania being loosely described as Hoxhaist.

On the whole, the original 1960s-era anti-revisionists tended to take a careful, selective approach to the Cuban Revolution and the way it soon aligned itself with Soviet ideas and practice, criticizing the latter action, while simultaneously acknowledging some aspects of Cuban self-described socialism as genuinely revolutionary—in particular the writing and thinking of Che Guevara. Anti-revisionists also took a hopeful approach towards the Vietnamese communists, expressing confidence that they too were genuinely revolutionary-communist in their aspirations, and supported their struggle against the United States in the Vietnam War—a side which, ironically, got a lot of support from the Soviet Union, anti-revisionists' "state capitalist" enemy.

Several present-day communist parties worldwide still see themselves as explicitly anti-revisionist, but not every such party adhering to elements of anti-revisionism necessarily adopts the label "anti-revisionist". Many such organizations may call themselves Maoist, Marxist–Leninist or even just simply "revolutionary communist".

The Workers Party of Korea still claims an anti-revisionist political line, but the communist movement as a whole and anti-revisionists from the Maoist and Hoxhaist camps in particular tend to insist North Korea is a revisionist state, however many if not most Hoxhaists and Maoists are critically supportive of North Korea on grounds of Anti-imperialism.

Anti-revisionists aligned with Enver Hoxha and the line of the Albanian party of labor argue that Mao Zedong thought is itself a form of revisionism. Hoxhaists insist that Mao's Three Worlds Theory contradicted Marxism–Leninism and existed only to justify Mao's alliance with the United States that began in the early 1970s and his meeting with Nixon during the Sino-Soviet split that Enver Hoxha and the Hoxhaists opposed. Hoxhaists also argue that the theory of New Democracy and People's War were revisionist and anti-scientific. The Hoxhaist camp came into existence during the Sino-Albanian split. 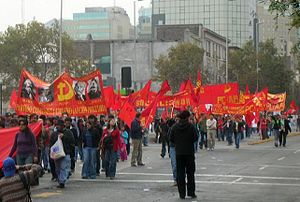 Supporters of the Chilean Communist Party (Proletarian Action), an anti-revisionist party, march during the May Day 2007 manifestations in Santiago, Chile, carrying a banner with the portraits of Marx, Engels, Lenin and Stalin.