From Infogalactic: the planetary knowledge core
(Redirected from Anti-Soviet)
Jump to: navigation, search
For the opposition to communism, see Anti-communism. 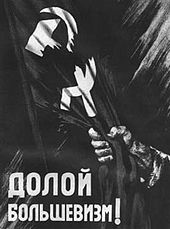 "Down with the Bolshevism!" Nazi propaganda poster in Russian for occupied Soviet territories 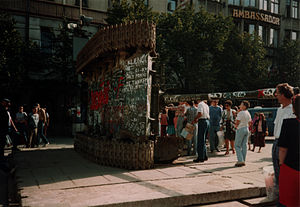 After the Velvet Revolution, the city of Prague placed a Soviet-era T-55, a symbol of the Soviet invasion of 1968, on its central square as a target for public ridicule.

Three different flavors of the usage of the term may be distinguished.

During the Russian Civil War that followed the October Revolution of 1917, the anti-Soviet side was the White movement. Between the wars, some resistance movement, particularly in the 1920s, was cultivated by Polish intelligence in the form of the Promethean project. After Nazi Germany's attack on the USSR, anti-Soviet forces were created and led primarily by Nazi Germany (see Russian Liberation Movement).

In the time of the Russian Civil War, whole categories of people, such as clergy, kulaks, former Imperial Russian police, etc. were automatically considered anti-Soviet. More categories are listed in the article "Enemy of the people".

For many people the major evidence of their guilt was their social status rather than actual deeds. Martin Latsis, chief of the Ukrainian Cheka, explained in a newspaper:

"Do not look in the file of incriminating evidence to see whether or not the accused rose up against the Soviets with arms or words. Ask him instead to which class he belongs, what is his background, his education, his profession. These are the questions that will determine the fate of the accused."[2]

Later in the Soviet Union, being anti-Soviet was a criminal offense. The epithet "antisoviet" was synonymous with "counter-revolutionary". The noun "antisovietism" was rarely used and the noun "antisovietist" (Russian: антисоветчик, antisovetčik) was used in a derogatory sense. Anti-Soviet agitation and activities were political crimes handled by the Article 58 and later Article 70 of the RSFSR penal code, and similar articles in other Soviet republics. In February 1930, there was an anti-Soviet insurgency in the Kazak Autonomous Socialist Soviet Republic village of Sozak.[3]