The anti-Stalinist left comprises various kinds of left-wing politics critical of Joseph Stalin, of Stalinism as a political philosophy, and of the actual system of governance Stalin implemented as dictator of the Soviet Union. 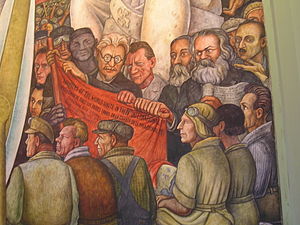 A Diego Rivera mural (Man, Controller of the Universe) depicts Trotsky with Marx and Engels as a true champion of the workers' struggle.

Associates and followers of Leon Trotsky were organised in the Left Opposition within the Communist parties before they were purged in the Moscow Trials in the 1930s. Subsequently, his followers formed the Fourth International in opposition to the Stalinist Third International. Trotsky saw the Stalinist states as deformed workers states, where a political structure gave most workers very little power in decision making.[1]

Trotsky and his followers were very critical of the lack of internal debate among Stalinist organizations and societies and political repression enacted by Stalinist governments (i.e., The Great Purge); nationalist elements of Stalinist theory (the Socialism in One Country thesis, for example, adopted by Stalin as state policy), that led to a very poor revolutionary strategy in an international contest (and breaking with the internationalist traditions of Marxism); and its dictatorial, bureaucratic, obscurantist, personalistic, and high repressive methods (which Trotsky called "inquisitorial", in a speech that was read and broadcast in English). Less orthodox Trotskyists and other critics of Stalin have seen it as a new form of class state, called bureaucratic collectivism (James Burnham, Milovan Đilas, and Max Shachtman) or as state capitalist (Tony Cliff and C. L. R. James).

The communist left was initially enthusiastic about the Bolshevik revolution, but lines of tension between the communist left and the leadership of the Communist International opened up very soon. Left communists such as Sylvia Pankhurst and Rosa Luxemburg were among the first left-wing critics of Bolshevism. Left communists see communism as something that can only be achieved by the proletariat itself, and not through the dictatorship of a vanguard party acting on its behalf. (See also council communism, Marxist humanism, ultra-left, luxemburgism.)

Anarchists like Emma Goldman were initially enthusiastic about the Bolsheviks, particularly after dissemination of Vladimir Lenin's pamphlet State and Revolution, which had painted Bolshevism in a libertarian light. However, the relations between the anarchists and the Bolsheviks soured in Soviet Russia (e.g. in the suppression of the Kronstadt rebellion and the Makhnovist movement). Anarchists and Stalinist Communists were also in armed conflict during the Spanish civil war. Anarchists are critical of the statist, totalitarian nature of Stalinism (and Marxism-Leninism in general), as well as its cult of personality around Stalin (and subsequent leaders seen by anarchists as Stalinists, such as Kim Il Sung or Mao Zedong).

A significant current of the democratic socialist movement has defined itself in opposition to Stalinism. This includes George Orwell, H. N. Brailsford,[2] Fenner Brockway,[3][4] and the Independent Labour Party in Britain (particularly after World War II). There were also a number of anti-Stalinist socialists in France, including writers such as Simone Weil[5] and Albert Camus[6] as well as the group around Marceau Pivert. In America, the New York Intellectuals around the journals Partisan Review and Dissent saw Soviet Communism as a form of totalitarianism in some ways mirroring fascism.

Another major split in the international Communist movement was that between Stalin and the Right Opposition. In several countries parallel Communist parties were formed that either were rejected by the Comintern or distanced themselves from it. Their criticism did in some ways become similar to positions raised by the Trotskyists, but as a tendency they were far less coherent. The Right Opposition developed contacts with other groups that did not fit into either the international Social democracy or Comintern, such as the Independent Labour Party in Britain. This tendency largely died out at the time of the Second World War. In other cases dissident Marxist trends developed outside of the established Communist movement, such as the Anushlian Marxists in India.

At first, the Communist Party of Yugoslavia and the regime it established through the successful war of liberation against the Axis invaders by the partizans was modeled on that of Soviet Union, and Tito was considered to be "Stalin's most faithful pupil". However, in 1948, the two leaders broke apart and Tito's aides (most notably Edvard Kardelj, Milovan Đilas, and Moša Pijade) began a theoretical effort to develop a new brand of Socialism that would be both Marxist–Leninist in nature and anti-Stalinist in practice. The result was the Yugoslav system of socialist workers' self-management, also known as Titoism, based on the organizing of every productive activities of society into "self-managed units".

Đilas, particularly, wrote extensively against Stalinism and was radically critical of the bureaucratic apparatus built by Bolshevism in the Soviet Union. He later grew critical of his own regime as well and became a dissident in Yugoslavia. He was imprisoned but later pardoned.

"Non-Communist Left", or NCL, was a designation used in the U.S. State Department and Central Intelligence Agency (CIA) referring mainly to leftist intellectuals who had become disillusioned by Stalin.[7] Arthur Schlesinger, Jr. highlighted the group's growing power in a popular 1948 essay titled "Not Right, Not Left, But a Vital Center", making a case for a permanent end to the Left as a unified bloc.[8] Another key publication was The God that Failed (1948), a compilation of essays from six former communists. 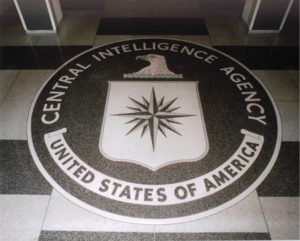 Winning over and harnessing the power of the NCL became central to the US propaganda struggle against the USSR during the early Cold War.[9] This strategy directly inspired the creation of the Congress for Cultural Freedom (CCF), as well as international journals like Der Monat and Encounter; it also influenced existing publications such as the Partisan Review.[10]

The NCL began to lose its cohesion and its appeal to the CIA during the radicalism of the late 1960s. Opposition to the Vietnam War fractured the coalition, and 1967 revelations of CIA funding (by Ramparts and others) were embarrassing for many of the intellectuals involved. Soon after the story broke, Braden (with tacit support from the CIA) wrote an article in the Saturday Evening Post which exposed CIA involvement with the Non-Communist Left and organized labor.[15][16] Some argued that this article represented an intentional and final break of the CIA with the NCL.[17]

The emergence of the New Left and the new social movements in the 1950s and 1960s led to a revival of interest in alternative forms of Marxism. Figures associated with British cultural studies (e.g., Raymond Williams), Italian autonomism and workerism (e.g., Antonio Negri), French groups like the Situationist International (e.g., Guy Debord) and Socialisme ou Barbarie (e.g., Cornelius Castoriadis) as well as the magazine Telos in America, were examples of this.

Notable figures in the anti-Stalinist left