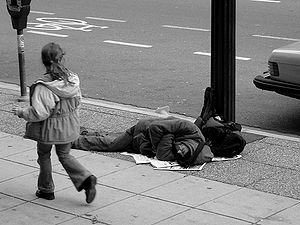 Man sleeps on the street, something anti-homelessness legislation seeks to regulate.

Since the publication of the Universal Declaration of Human Rights (Charter of the United Nations — UN) in 1948, the public perception has been increasingly changing to a focus on the human right to housing, travel and migration as a part of individual self-determination rather than the human condition. The Declaration, an international law reinforcement of the Nuremberg Trial Judgements, upholds the rights of one nation to intervene in the affairs of another if said nation is abusing its citizens, and rose out of a 1939–1945 World War II Atlantic environment of extreme split between "haves" and "have nots." Article 6 of the 1998 Declaration of Human Duties and Responsibilities declares that members of the global community have individual and collective duties and responsibilities to take appropriate action to prevent the commission gross or systematic human rights abuses.[1] The modern study of homeless phenomena is most frequently seen in this historical context.

The Scottish parliament passed the Homelessness etc. (Scotland) Act 2003 which has an aim of ensuring that by 2012 everyone assessed as being unintentionally homeless will be entitled to permanent accommodation. In addition, the Homeless Persons (Unsuitable Accommodation) (Scotland) Order 2004 requires councils to ensure that pregnant women and households with children are not placed in unsuitable temporary accommodation, unless there are exceptional circumstances.[2]

Laws criminalizing behaviors engaged in by the homeless

Use of the law that criminalizes the homeless generally takes on one of five forms:[4]

Further information: Criminalization of homelessness in the United States

The National Coalition for the Homeless reports that there is a growing trend in the United States towards criminalizing the state of being homeless.[7] Proponents of this approach believe that punitive measures will deter people from choosing to be homeless. To this end, cities across the country increasingly outlaw activities such as sleeping, eating, sitting, and begging in public spaces, and selectively enforce more neutral laws—such as those prohibiting open containers or loitering—against homeless populations.[7] Violators of such laws typically incur criminal penalties, which result in fines and/or incarceration.

In Jones v. City of Los Angeles,[8] the United States Court of Appeals for the Ninth Circuit held that "the Eighth Amendment prohibits the City from punishing involuntary sitting, lying, or sleeping on public sidewalks that is an unavoidable consequence of being human and homeless without shelter in the City of Los Angeles". However on October 15, 2007, the Court vacated its opinion after the parties settled the case and sought withdrawal of the Opinion.[9]

Critics of homeless criminalization claim that such measures do nothing to actually solve homelessness and in fact make matters worse. Homeless people find it harder to secure employment, housing, or federal benefits with a criminal record, and therefore penalizing the act of being homeless makes exiting such a situation much more difficult.[4] Although the court's opinion in Jones v. City of Los Angeles (see above) was vacated, the result suggests that criminalizing homelessness may be unconstitutional. Similarly, in response to growing reports of hate crimes, some state governments have proposed the addition of "people experiencing homelessness" to their hate-crimes statutes.[citation needed]