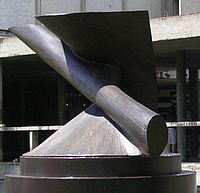 Antoine Pevsner (30 January [O.S. 18 January] 1886 – 12 April 1962) was a Russian-born sculptor and the older brother of Alexii Pevsner and Naum Gabo. Both Antoine and Naum are considered pioneers of twentieth-century sculpture.

Pevsner was born in Klimavichy, Russian Empire (now Belarus), into a Jewish family. Among the originators of and having coined the term, Constructivism, and pioneers of Kinetic Art, they discovered a new use for metals and welding and made a new marriage of art and mathematics. Pevsner said: "Art must be inspiration controlled by mathematics. I have a need for peace, symphony, orchestration.". Pevsner's studio was on the outskirts of Paris and housed his sculptures. He was one of the first to use the blowtorch in sculpture, welding copper rods onto sculptural forms[1] and along with his brother, Naum, he issued the Realist Manifesto in 1920.