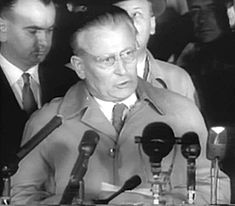 Antonín Josef Novotný (10 December 1904 – 28 January 1975) was General Secretary of the Communist Party of Czechoslovakia from 1953 to 1968, and also held the post of President of Czechoslovakia from 1957 to 1968. A hardline supporter of Stalinism[citation needed] before and after the death of the Soviet leader, Novotný was forced to yield the reins of power to Alexander Dubček during the short-lived reform movement of 1968.

Antonín Novotný was born in Letňany, Austria Hungary, now part of Prague, Czech Republic. The Novotný family was working class in social origin and he worked from an early age as a blacksmith.[1]

In 1935, Novotný was selected as a delegate to the 7th World Congress of Comintern.[1] He was made a regional party secretary in Prague in 1937 and made secretary and editor of the CPC's newspaper in the South Moravian Region in 1938.[1]

With the coming of World War II and occupation of Czechoslovakia by Nazi Germany in 1939, the CCP was outlawed and forced into an underground existence.[1] Novotný served as one of the leaders of the CCP in the underground movement in Prague.[1] Novotný was finally arrested by the German secret police, the Gestapo, in September 1941 and was immediately deported to the Mauthausen concentration camp.[1]

Novotný managed to survive his concentration camp experience and was liberated by American troops on 5 May 1945.

After the war, Novotný returned to Czechoslovakia and resumed his activity in the Czech Communist Party. He was elected a member of the governing Central Committee of the CPC in 1946.[1] He was promoted to the Secretariat of the Central Committee in September 1951 and became one of the party's top leaders on the CPC's Politburo following the arrest of Rudolf Slánský for alleged "Titoism" in November of that same year.[1]

Novotný was formally appointed as Deputy Prime Minister in February 1953.[1] After the death of party leader Klement Gottwald in March 1953, Novotný became a leading candidate in the succession struggle, ultimately winning out in September 1953 when he was named First Secretary of the party—effectively making him the leader of Czechoslovakia.[1]

While President Antonín Zápotocký wanted a less repressive way of governing, the hardliner Novotný was able to outflank them because he had the backing of the Soviet Union. In late 1953, at a meeting in Moscow, Zápotocký and Široký were told to adhere to the principles of "collective leadership" — in other words, abandon power to Novotný.

In the Czechoslovakia of Novotný, people continued to face strict government regulations in the arts and media, although they had loosened dramatically since Stalin's death in 1953 and the subsequent De-Stalinisation programmes of 1956. His quasi-authoritarian practices led to mounting calls for a new form of socialism over the unsatisfactory pace of change that would include the accountability, proper elections, and responsibility of leaders to society. Novotný's administration, however, still remained centralised for 10 years. But during these years evolved e.g. Czechoslovak film miracle. Following the death of Zápotocký in 1957, Novotný was named as President of the republic, further consolidating his grip on power.[1] Three years later, he replaced the superficially democratic Ninth-of-May Constitution with a new constitution that was a fully Communist document.

While Novotný was forced to adopt some reforms due to popular pressure in the 1960s, these efforts were half-hearted at best. Growing public dissatisfaction caused Novotný to lose his grip on power. He was forced to resign as party leader in January 1968 and was replaced by a reformer, Alexander Dubček. In March 1968, he was ousted as president and in May he resigned from the Central Committee of CPC.

In 1971, during the period of normalization, he was reelected to the Central Committee. However, his political influence was minimal and he was too ill to be a strong force in the Gustáv Husák administration.