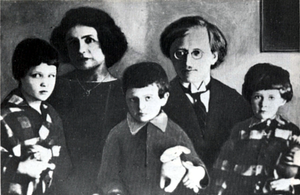 Anton Vladimirovich Antonov-Ovseyenko (in centre) as a child with his siblings and parents during their stay in Prague, Czechoslovakia.

Born on 23 February 1920, he was the son of a Bolshevik military leader Vladimir Antonov-Ovseyenko.[3] In 1935, he joined the historical faculty of the Moscow State Pedagogical Institute. In 1938, he was expelled from Komsomol and the institute wherein, however, he was reinstated in the same year.[1]

Antonov-Ovseyenko is best known for his biography of Lavrentiy Beria and he also wrote several books.

Antonov-Ovseyenko operated a state museum on the Gulag, for which the Moscow administration provided a building in August 2001.[4][5]

When he died in 2013, he was still working two full days a week to continue documenting what he called "the evils of the Soviet era" and to help with plans for a new, larger space.[6]