Babchuk was a first round selection, 21st overall, of the Chicago Blackhawks at the 2002 NHL Entry Draft, and has played for the Blackhawks, Carolina Hurricanes, and Calgary Flames in his NHL career. He has also played with Ak Bars Kazan, SKA Saint Petersburg, Avangard Omsk, HC Donbass, Salavat Yulaev Ufa and Torpedo Nizhny Novgorod of the Kontinental Hockey League (formerly the Russian Super League).

Originally from Kyiv, Ukraine, Babchuk began playing hockey at the age of three.[1] He began his training with the Sokil Kyiv junior hockey affiliate, a team which included fellow future Ukrainian NHLer Nikolai Zherdev. While participating in an overseas peewee tournament in Quebec, Canada, Babchuk's team found itself competing against a team from Elektrostal, Russia. The rival team's coach, Ravil Iskakhov, took note of both Babchuk and Zherdev, and invited the pair to further their development with the Elemash Elektrostal hockey club of the Russian Major League, to which they accepted together.[2] 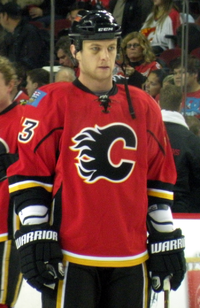 Babchuk on the Calgary Flames.

In the 2005–06 season, Babchuk was traded to the Carolina Hurricanes for Danny Richmond on January 20, 2006.[3] Babchuk scored his first goal for the Hurricanes on January 28, 2006. He was also named second star of the game. Babchuk played in 22 games with the Hurricanes for the season and was a part of the extended squad of the Hurricanes as they became the Stanley Cup Champions. After winning the Cup, Babchuk took it with him to Kyiv, Ukraine, and celebrated with teammate Oleg Tverdovsky. "I wish hockey was as popular as soccer in Ukraine," he told those in attendance. "If it was, I gladly would have played for a team in Kyiv." [4]

In the 2006–07 season, on February 6, 2007, the Hurricanes activated František Kaberle from injury, forcing them to send Babchuk down to the Albany River Rats. Babchuk was the only possible defenceman they could send down because he was the only one on the Hurricanes' roster that was not subject to waiver wire claims. The next day, Carolina announced that they had suspended Babchuk because of his refusal to report to Albany. In 2007–08, Babchuk played in the Russian Superleague (RSL) for Avangard Omsk.

On July 1, 2008, Babchuk re-signed with the Hurricanes to a one-year contract for the 2008–09 season.[5] He led all Hurricanes' defensemen with 16 goals in 72 games. Following a contract dispute that lead to him requesting a trade out of Carolina, Babchuk turned back to Russia on 19 September 2009, re-signing with Kontinental Hockey League (KHL) club Avangard Omsk.[6] During the very first training day in Omsk, he broke the ice rink glass with a shot at Arena Omsk.[7][8] Babchuk was chosen to play on Team Yashin at the 2nd Kontinental Hockey League All-Star Game.

On July 1, 2010, Babchuk re-signed with the Carolina Hurricanes to a one-year contract worth $1.4 million.

On November 17, 2010, Babchuk was traded along with Tom Kostopoulos to the Calgary Flames for Ian White and Brett Sutter.

On July 4, 2011, Babchuk re-signed with the Flames for two years, at $2.5 million per season. Following the 2012 NHL lockout, he signed in his native Ukraine with HC Donbass along with fellow Ukrainian NHL players Ruslan Fedotenko and Alexei Ponikarovsky.