Anton Flettner (November 1, 1885   December 29, 1961) was a German aviation engineer and inventor. He made important contributions to airplane and helicopter design. He was born in Eddersheim (today a district of Hattersheim am Main).

During World War I, Flettner developed the servo tab / anti-servo tab, and working under the aegis of Graf Zeppelin, he worked on remote control and pilotless aircraft. This work culminated in the prototype Siemens Schuckert Werke 1000 kg wire guided air to surface missile of 1918.

The servo, or trim tab, is used in the control surfaces of aircraft and boats. It is important for large boats, that are able to move very large rudders with vastly reduced power. Trim tabs in airplane rudder are a basic part of most modern planes

In the 1920s, he bought a schooner and added two rotating 50-foot cylinders onto it, and thus was the first to build a propulsion system based on the Magnus effect. He came upon the idea while at the beach with his wife. He used sand, flowing over his rotating hand, to describe the Magnus effect and realized its potential on sail propulsion. The ship was named Baden-Baden and crossed the Atlantic in 1926. It could outsail normal schooners under moderate to heavy winds, but was destroyed by a storm in 1931. A commercial ship, the Barbara, was also built, and sailed to the United States.

Anton Flettner was also noted for his invention of the famous Flettner rotary ventilator, widely used on buses, vans, boats, campervans and trucks to assist cooling without the use of energy — modern derivatives of his ventilator are still manufactured in Britain by Flettner Ventilator Limited.

The helicopter invention was accomplished from his wealth from the ventilator business, whose success also depended on the skill of his wife, Lydia Freudenberg Flettner. Although Anton Flettner built his helicopters for the German military, primarily for navy spotter use, his wife was Jewish. He held a personal relationship with Himmler who in turn had a lower ranked officer and his men escort her family safely to Sweden for the duration of World War II. His partner and confidant was Dr. Kurt Hohenemser, a brilliant and thorough engineer who developed the details necessary for the helicopter's success. Dr. Hohenemser's father was also Jewish, yet the pair remained unharmed during their tenure together throughout the war as they worked to develop the helicopter for military use.

While the final product, the Flettner Fl 282 Kolibri ("Hummingbird"), could be factory-assembled, Flettner and Hohenemser insisted that they were the only ones who were capable of assembling the complex intermeshing rotor gearbox assembly.[citation needed] However, plans for mass production for 1,000 examples by BMW were made, which were disrupted by the destruction of the designated factory by allied bombing. 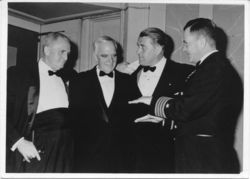 Upon the war's conclusion, Anton Flettner was held in the "Dustbin" interrogation camp at Kransberg Castle. According to his partner, Dr. Kurt Hohenemser, Anton Flettner was of "the first regular German immigrants after the war". After 1945, Flettner, along with many other aviation pioneers, was brought to the United States as part of Operation Paperclip.[1] He started Flettner Aircraft Corporation, which developed helicopters for the U.S. military. Flettner's company in the U.S. was not commercially successful, but his work was shared with the USAAF. Many of the Flettner design concepts are found in Kaman helicopters of later years. Flettner became the chief designer of Kaman. Flettner died at age 76 in New York City on December 29, 1961.[2]