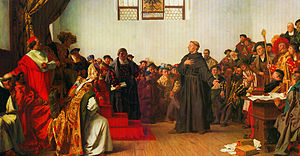 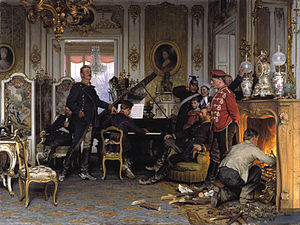 Werner was born in Frankfurt (Oder) in the Province of Brandenburg. He began painting in 1857 as a student painter, then studied painting at the Academy of the Arts in Berlin. He pursued his studies at Karlsruhe, where he studied under Johann Wilhelm Schirmer, Ludwig Des Coudres and Adolf Schroedter. After having won a travelling scholarship upon the exhibition of his early works, he visited Paris in 1867, and afterwards Italy, where he remained for some time. On his return, he received several state commissions.[2]

On the outbreak of the Franco-Prussian War in 1870, Werner was sent with the staff of the third corps d'armée, and stayed in France until the close of the campaign in 1871.[2][3] In that year, he married Malwine Schroedter, Adolph Schroedter's daughter.[4] In 1873 he was appointed professor at the Berlin Academy.[2] His career reached its peak when he became, in 1875, director of the Academy. After 1888, while in William II's court, Werner tutored the emperor to become a painter.[1] In 1909, he succeeded Hugo von Tschudi in to directing the Nationalgalerie in Berlin.[5] He died in Berlin in 1915 and was interred at the Alten Zwölf-Apostel-Kirchhof à Berlin-Schöneberg. 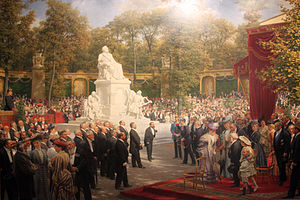 Unveiling of the Richard-Wagner Monument in the Tiergarten (1908)

Werner's more important works include The Capitulation of Sedan, Proclamation of the German Empire at Versailles, Moltke before Paris, Moltke at Versailles, The Meeting of Bismarck and Napoleon III, Christ and the Tribute Money, William I visiting the Tombs, The Congress of Berlin, and some decorations executed in mosaic for the Berlin Victory Column. Werner's work is chiefly interesting for the historic value of his pictures of the events of the Franco-Prussian War.[2]

Werner was good friends with Norwegian painter Hans Gude whom he met at the Karlsruhe school, and whom he would later work with at the Berlin Academy.[6] Gude wrote of Werner in 1873,

Even then [Werner] manifested a versatile and rich talent, besides incredible assiduity and capacity for work; he was one of the best on our side. He was also tireless in inventing all sorts of high jinks to amuse us on the Sunday afternoons when the entire group assembled. 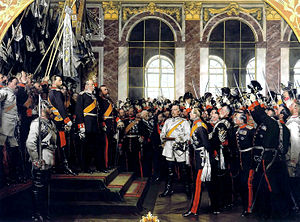 The proclamation of the German Empire (1885)

One of his students at the Prussian Academy of Arts was Emil Fuchs;[7] another was August von Brandis.